Spring has begun, and that typically means the start of severe weather season for parts of the country.

One product you may see is the convective outlook, or severe weather outlook, from the Storm Prediction Center. This map can provide useful guidance on how much severe weather is expected and how intense those storms could be.

A thunderstorm is considered to be severe when winds are at least 58 mph, it is producing hail at least one inch in diameter, and/or a tornado. An event can have just one or two severe storms with winds of 60 mph, or it might have a widespread outbreak of violent tornadoes.

Depending on the level issued, you can gauge where on this spectrum the threat for severe weather falls. A marginal risk is issued if only isolated severe weather is expected. Maybe a couple of storms will hit severe criteria, perhaps an isolated tornado will be produced, but the threat is limited.

The enhanced risk category was added in 2014. It indicates a somewhat higher threat for severe storms. Storms are expected to be more widespread and more intense.

The high risk category is reserved for a setup where meteorologists at the Storm Prediction Center are confident that there will be an outbreak of long-lived, widespread, dangerous weather. These are often issued ahead of significant tornado outbreaks and violent tornadoes are often reported on high risk days. 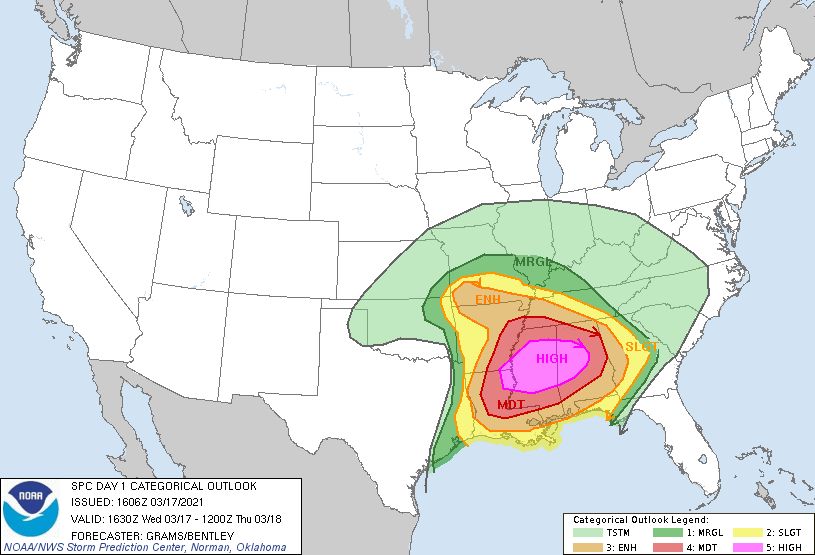 The convective outlook is designed to give you a heads-up on areas of potential severe weather days in advance.

A watch is issued a few hours ahead of a storm, and a warning lets you know that now is the time to go to shelter because a storm is just minutes away.