In the 1800s, it was hard for women to receive recognition for their work in any field, but one woman’s climate discoveries are finally being credited.

In honor of Women's History Month, we take a look at the life of Eunice Foote.

Taught scientific theory by Amos Eaton at an early age, Foote dedicated the rest of her life to science.

She attended Emma Willard School, where students were also allowed to attend a nearby science college. It is here where Foote learned the foundations of chemistry and biology.

Foote later found inspiration in the books of Almira Hart Lincoln Phelps, a female pioneer of women in science, a botany expert, and the third female member of the American Association for the Advancement of Science (AAAS).

She went on to make big contributions to climate science research.

Foote conducted a series of experiments showing the interactions of the Sun’s rays on different gases in our atmosphere.

Using three glass cylinders, she placed either carbon dioxide, regular air, or hydrogen in each one along with a mercury thermometer. She found the heating effect of the Sun was greater in moist air than dry air, and it was also the highest in the cylinder containing carbon dioxide.

She also noted that the cylinder with carbon dioxide took the longest to cool.

Foote concluded, "an atmosphere of that gas would give to our earth a high temperature; and if as some suppose, at one period of its history the air had mixed with it a larger proportion than at present, and an increased temperature must have necessarily resulted." 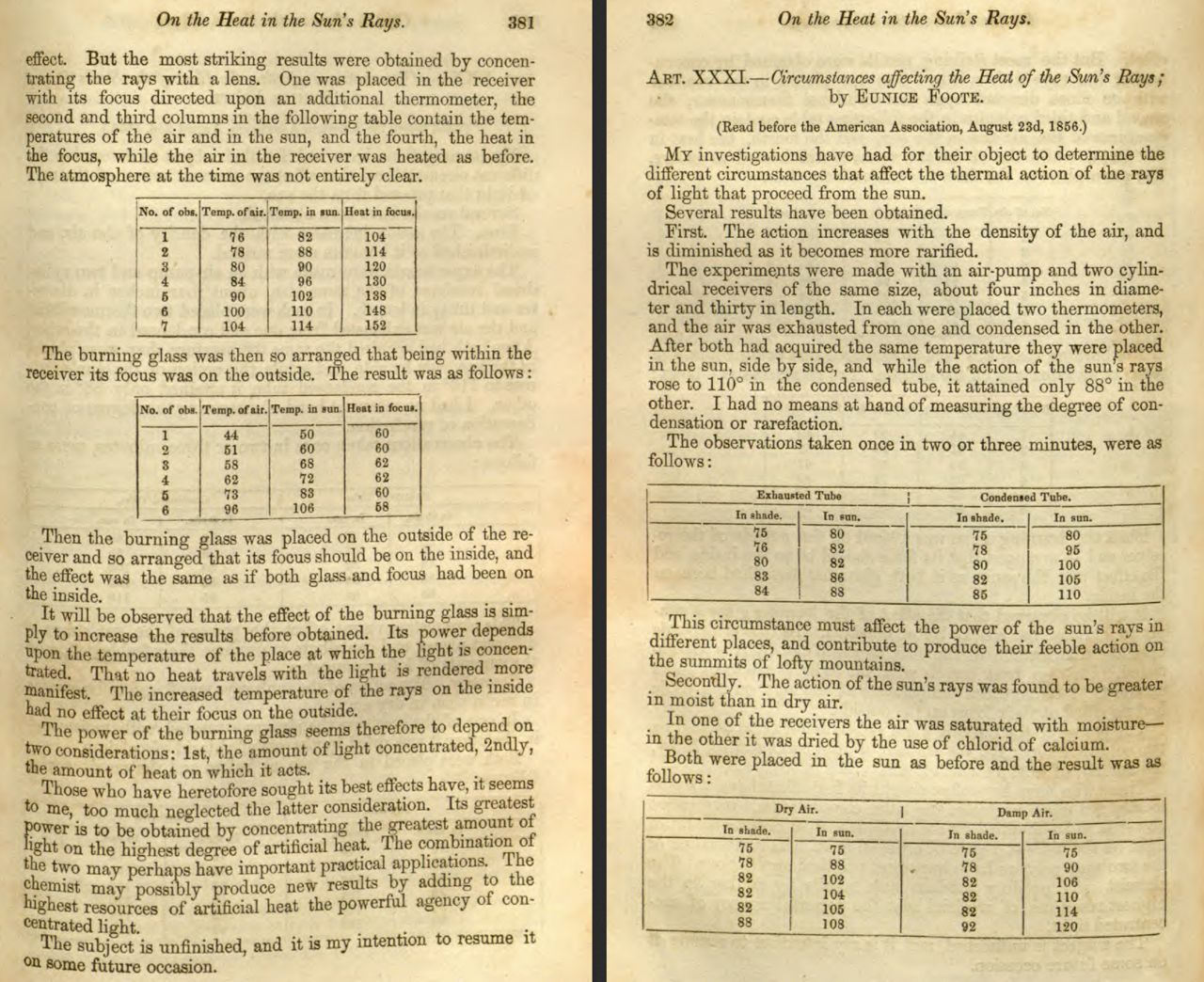 No recognition for Foote

A male colleague presented her work at the Annual Meeting of the AAAS on Aug. 23, 1856, but unfortunately, the conference proceedings did not include her paper and presentation.

The American Journal of Science and Arts only published a short paper of her work in Nov. 1856.

A few years later, scientist John Tyndall conducted more experiments on the greenhouse effect that became more widely known. He ended up giving partial credit to Mathias Pouillet for his work on solar radiation and the atmosphere.

Not once did he mention Foote’s work, but whether he knew of her work or thought it was unimportant is unknown.

Nonetheless, over 150 years later, Foote finally received the credit she deserved, all thanks to a geologist, Ray Sorenson, that came across her work in 2010. He published his findings on Foote, and it gained a lot of traction.

In 2019, the University of California, Santa Barbara held a lecture and library exhibit, recognizing Foote’s work with climate science. It helped bring a lot of light to her greenhouse experiments.

A director named Eric Garro even made a movie about Foote's life.