A man attempts to control his umbrella during inclement weather brought about by Tropical Storm Fay on July 10, 2020, in New York. Frank Franklin II/AP.

Tropical Storm Fay wasn’t anything close to a hurricane, but it did lead to flooding at #RiversidePark and Melville Street in the #Bronx, and high winds at #BrightonBeach. https://t.co/9IpLk6KoVs

A Flash Flood Warning and Tropical Storm Warning were issued for the city, but the heaviest rain has passed, replaced by spot showers.

Gusts as strong as 46 mph were recorded in the city Friday, weaker than the 60 mph winds at the center of the tropical storm earlier in the day.

Some rain and high winds are expected to continue this afternoon.The parks departments said, as of 6 p.m. Friday, it received 348 reports of damaged or fallen trees citywide:

The city got anywhere between 2 and 3 inches of rain, depending on the area yesterday. Midtown saw nearly 3 inches, there were 2.4 inches for Central Park — more precipitation than it got during the entire month of June — and 2.5 was the count on Staten Island.

The severity of the thunderstorms, which arrived in the morning, varied. Around 3 p.m. just south of Jamaica, Queens, rainfall rates were about 2 inches per hour, enough to flood roadways; in Midtown, it was a tick under 1 inch of rain per hour; at the boardwalk in Brighton Beach at the same time, rain was on and off; and Staten Island was estimated to have already seen 2 inches of precipitation by the afternoon, leading to flooding: 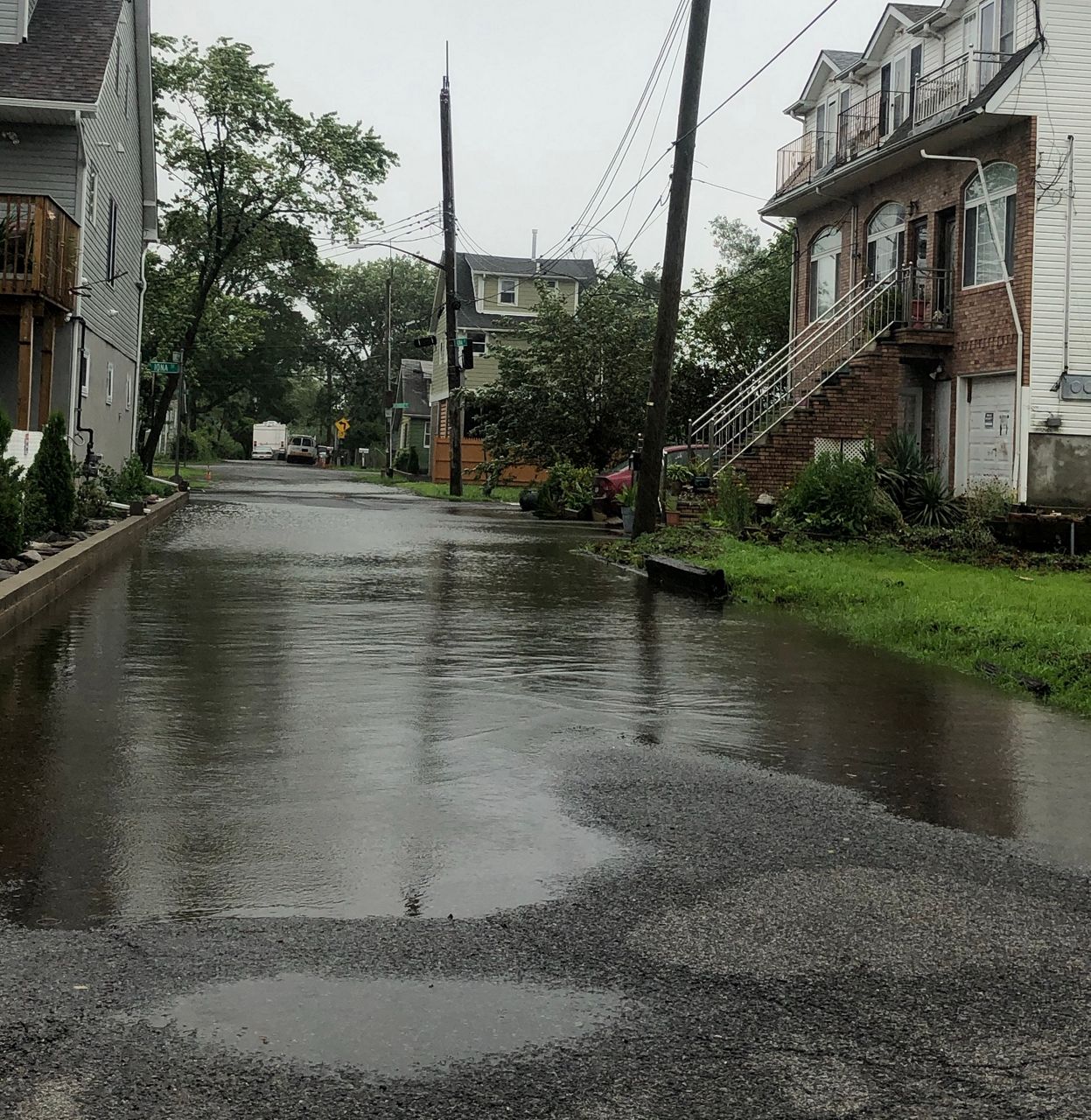 (A flooded street on Staten Island after a band of rain from Tropical Storm Fay on July 10, 2020. Sarah Wemy/NY1.)

Flooding was intense in some areas, such as Melville Street in the Bronx, where people waded through knee-deep water. At Riverside Park, stairs looked more like a waterfall as the rain came rushing down.

New Yorkers are warned to never drive into flooded roads.

The MTA prepared for Tropical Storm Fay for two days, given that heavy rain means waterfalls in subway stations.

Friday was no exception, as a subway rider posted video on Twitter of one in the Court Street station in Long Island City:

An MTA spokeswoman said a clogged vent between the sidewalk in the subway station caused the waterfall. The MTA sent a vacuum truck to clean it up.

Even as the heavy rainfall passed, the 42nd Street-Bryant Park subway station saw flooding on a downtown platform.

Earlier Friday, NY1 visited a hydraulics facility in downtown Brooklyn to see the tools transit workers used to pump hundreds of gallons of water out of the system a minute.

The city will see unrelated scattered thunderstorms early Saturday afternoon, but they won’t be nearly as intense as those Fay brought. Downpours and frequent lightning are the main threats, with isolated flash flooding expected. But we’ll be back to sun and clouds Sunday.

Expect rough surf and riptides all weekend in Fay's wake.

The storm dropped temperatures into the 70s Friday, but we’ll be back around 86 Saturday, and 91 for Sunday. The feels-like temperature will be in the mid-90s Sunday thanks to the humidity.

A heat wave is possible next week, with projected temperatures in the low 90s and upper 80s.

Just over a month into the Atlantic hurricane season, records are being broken.

We have seen six named storms so far this year, the fastest start to any season since record keeping began. The previous record for earliest date of a sixth-named storm was July 21, 2005, from the infamous season that brought storms like Katrina and Rita to U.S. shores.

The last tropical storm to make landfall in the city was Hurricane Irene in 2011.