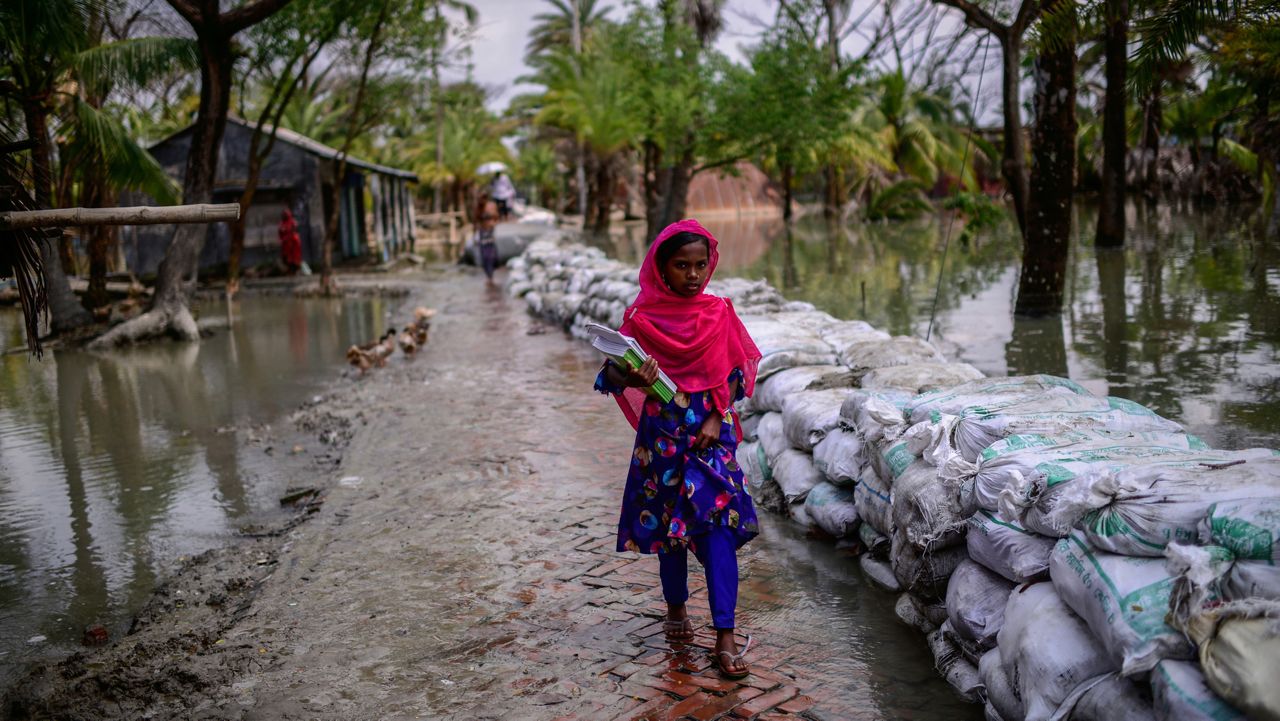 A girl walks home from school after waiting for low tide when the road is visible in Pratap Nagar, in Shyamnagar region of Satkhira district, Bangladesh on Oct. 5, 2021. (AP Photo/Mahmud Hossain Opu)

A climate report released by the Biden administration last month offers a stark warning about the effects climate change could have on migration and security around the world.

The report said that migration caused by climate change could exacerbate existing geopolitical tensions, displace millions of people and deepen political instability in parts of the world.

The report illustrates the federal government’s deepening concern about the ripple effect of climate change and global warming, which officials say could upend strategic interests and posing a direct harm to national security.

Unlike previous climate reports, these assessments focused largely on the human toll of global warming.

According to the U.N. High Commissioner for Refugees, severe weather emergencies – including floods, storms, wildfires and extreme temperatures – force an average of 21.5 million people from their homes each year.

"Extreme weather events and conflict are the top two drivers of forced displacement globally, together responsible for the annual movement of nearly 30 million people from their home,” according to the White House report on climate change and migration.

A recent World Bank report echoed the administration’s grim forecast. That report, published in September, predicted that, absent immediate and concerted action from world leaders, more than 200 million people would be forced to leave their homes due to climate change by the year 2050.

For years, the Defense Department has called climate change a threat to U.S. national security.

Many of those countries are already struggling with civil conflict, food instability, or being governed by deeply oppressive political regimes.

Climate change will “increasingly exacerbate risks to U.S. national security interests,” according to the intelligence assessment.

"We assess that climate change will increasingly exacerbate risks to U.S. national security interests as the physical impacts increase and geopolitical tensions mount about how to respond to the challenge," according to the National Intelligence Estimate report, published by the Office of the Director of National Intelligence. "Intensifying physical effects will exacerbate geopolitical flashpoints, particularly after 2030, and key countries and regions will face increasing risks of instability and need for humanitarian assistance," it said.

Another report, the first by the government focusing at length on climate and migration, recommends a number of steps, including monitoring the flows of people forced to leave their homes because of natural disasters, and working with Congress on a groundbreaking plan that would add droughts, floods and wildfires and other climate-related reasons to be considered in granting refugee status.

“Policy and programming efforts made today and in coming years will impact estimates of people moving due to climate-related factors,” said the report, one of dozens of climate change assessments Biden ordered from federal agencies.

“Tens of millions of people, however, are likely to be displaced over the next two to three decades due in large measure to climate change impacts.”

Some of the people being displaced could end up seeking entry to the U.S. – which is why, Tower says, she believes the U.S. and other leaders in greenhouse gas emissions need to help the countries being hardest-hit by the effects of climate change.

“We have enough data, knowledge, to be predicative about this,” Tower told Spectrum News. “To understand why people are moving. To understand, and therefore know how to respond … and respond in a preventative fashion; to help people stay.”

“Because it's also really important to understand that people want to stay” in their homes, Tower stressed.

“Nobody wants to be forced to leave their home. And that's what this situation is. This is not … people coming here in search of better opportunities. On the contrary. This is this is a situation where people are coming here as a result of desperate outcomes, [and] it’s really our failure.”

Currently, no nation offers asylum or any other form of legal protection for people displaced by climate change – though advocates hope that will change in the near future.

“New Zealand did try to create a humanitarian visa that would apply and provide protections for climate-induced migrants,” Vignarajah added. “But so far, we haven't seen any country solidify legal protections. We know that this is a growing demographic of migrants. And so there has to be increased protections, because it's a reality that will only get worse.”

The climate migration assessments also urge the creation of a task force to coordinate U.S. management of climate change and migration across government, from climate scientists to aid and security officials.

The "central recommendation" of the climate reports is to establish a first-of-its-kind interagency policy process on climate change, one senior administration official told Axios last month.

“We know that some of the most vulnerable people, whether it's here in the U.S., who face climate change, climate gentrification are those who are unfortunately least able to navigate [these types of challenges]– because they have less resources, they have less power,” Vignarajah told Spectrum News.

“And that's true globally, as well,” she continued. “Those who are in developing nations [and] indigenous communities are going to bear the brunt of what will come, if we don't take immediate and urgent and strong action to respond to the climate crisis.”