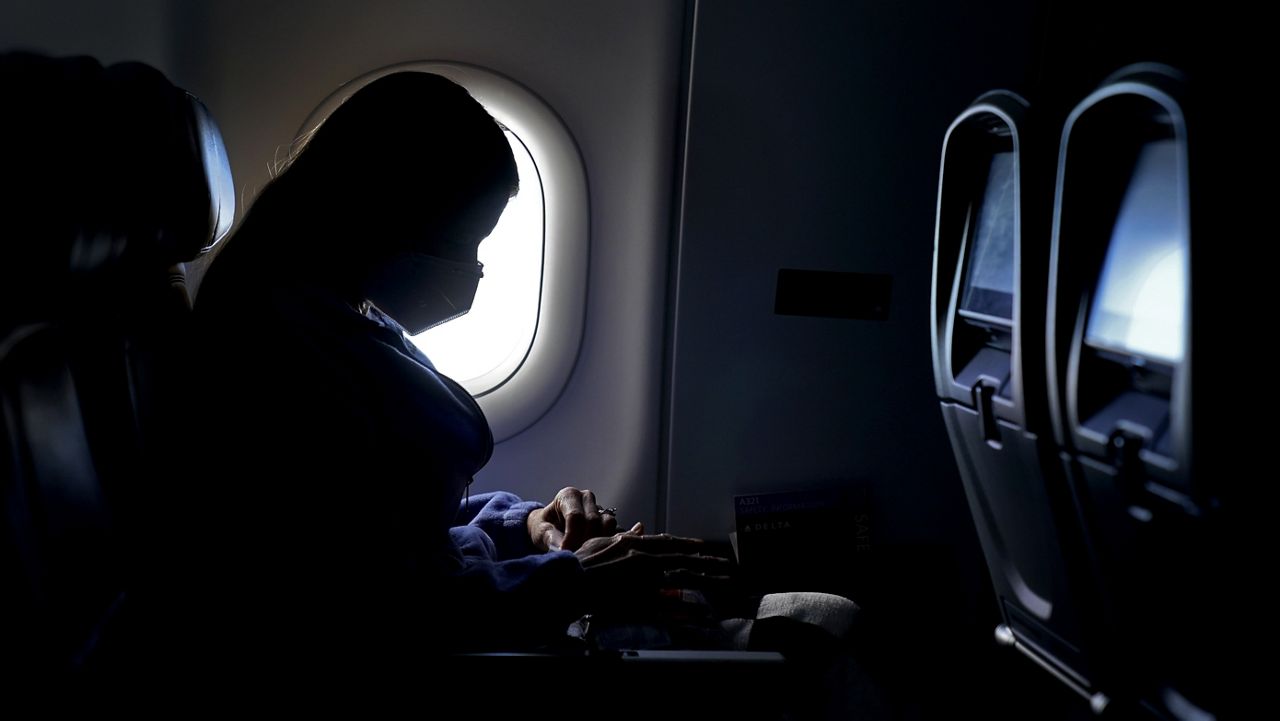 FILE - In this Feb. 3, 2021, file photo, a passenger wears a face mask she travels on a Delta Air Lines flight after taking off from Hartsfield-Jackson International Airport in Atlanta. (AP Photo/Charlie Riedel, File)

The House Subcommittee on Aviation heard testimony Thursday from airline officials, flight attendants, and airport representatives, in an effort to examine what it characterized as an alarming uptick in disruptive airline passengers and incidents of so-called “air rage,” which have spiked in the past year.

The testimony comes as lawmakers consider whether to enact harsher penalties as a deterrent for such behavior.

Witnesses Thursday included Sara Nelson, the International President Association of Flight Attendants at CWA, AFL-CIO; Teddy Andrews, a flight attendant who testified on behalf of the Association of Professional Flight Attendants; Christopher Bidwell, of the Airports Council International - North America (ACI), and Lauren Beyer, the vice president of security and facilitation at Airlines for America (A4A).

Between Jan. and Sept. 2021, the Federal Aviation Administration has logged 4,284 unruly passenger reports and 3,199 mask-related incidents. The agency initiated 789 investigations and more than 160 law enforcement cases as a result of those incidents and proposed more than $1 million in fines against unruly passengers.

The increase in-flight disruptions has prompted new attention from lawmakers on Capitol Hill, who have called this week for such incidents to be met with stiffer penalties and, in some cases, criminal charges.

In her opening remarks Thursday, Nelson, whose association represents flight attendants from 17 airlines, characterized the increase in in-flight disruptions as “staggering.”

Nelson said that said if incidents continue at this level, it “may result in more incidents in 2021 than the entire history of commercial aviation.”

"This pandemic has been amongst the most trying and tumultuous times to work in the airline industry,” said Andrews, an American Airlines flight attendant based in Charlotte, N.C.

"These days I come to work anticipating [disruptive] behavior," he added.

Andrews has worked in the industry since 1981, when he took a job with Pan American Airways.

But despite his passion, Andrews said the past year has presented him with some of the biggest challenges of his career.

“It's been the toughest 18 months in my 41 years in the industry,” he told Spectrum News in an interview.

Speaking to lawmakers Thursday, Andrews recalled one particularly harrowing incident with a disruptive passenger who refused to wear a mask. When he politely requested the man do so, Andrews said, he was called the N-word.

“Air rage has reached unprecedented levels,” he said Thursday. "These days, I come to work expecting some form of disrespect."

In January, the Federal Aviation Administration instituted a zero-tolerance policy, and the TSA earlier this month doubled fines for individuals who do fail to comply with its mask mandate on commercial flights.

FAA officials said the rate of incidents on commercial airlines has dropped by 50% since it launched its zero tolerance campaign, but incidents remain at least twice as high as the end of 2020.

Asked how the 2021 statistics on in-flight disruptions compared to that of the previous year, when pandemic-era restrictions and mask requirements were first adopted by most U.S. airlines, the FAA told Spectrum News that it has no such annual records on file.

“We didn't track annual unruly passenger reports in previous years because the numbers were fairly constant,” an FAA spokesman said in an email. “We began tracking reports when they surged at the beginning of 2021.”

Previously, the FAA said, it only tracked the number of formal investigations it launched.

While internal “no fly lists” have helped commercial airlines identify disruptive and prohibit disruptive passengers from traveling on their own aircrafts, industry officials said Thursday that they do not currently have the ability to share that information with other airlines – thus allowing unruly passengers to potentially buy a ticket from another carrier if they are booted from a flight.

“That’s a good answer, thank you,” DeFazio said, adding: “That’s a problem – maybe we can have FAA create a database and they can ask people can post to that, and then airlines can access it in the future.”

During Thursday’s hearing, airline officials also noted heightened resistance to airline mask mandates from passengers in states that have relaxed or removed their own mask policies, such as Florida and Texas, among others.

Witnesses said the disparity between state and federal law – which mandates mask use on all U.S. commercial flights – has been a major source of confrontations between flight attendants and passengers.

Some people who come on board feel they can “just go by their states or their cities' policy, but not the airline policy,” Andrews told Spectrum News.

On Thursday, Rep. Eddie B. Johnson, D-Tex., asked why the Department of Justice is not doing more to prosecute disruptive passengers.

In response, Nelson said that the Justice Department has been “slow to conduct criminal investigations or seek indictments" following reports of an in-flight incident, and called on Congress to “encourage DOJ to take [enforcement] actions.”

Importantly, witnesses said, the increase in disruptions and mask-related confrontations distracts them from doing their jobs properly.

“Medical emergencies, onboard fires, security threats, and emergency evacuations are all situations in which we are prepared to encounter every time we come to work,” Andrews said.

“But now our most immediate danger, and our biggest distraction, is the number of incidents we find ourselves having to deescalate. I believe that passengers who so willfully cause disruptions, who show no regard for our policies and personnel, put all others in danger,” he added.

On Thursday, Andrews acknowledged that the physical and verbal assaults endured by flight attendants this past year have made it “challenging to continue to come to work and smile each day.”

"But I've not made any moves towards that, because I still love what I do," he continued.