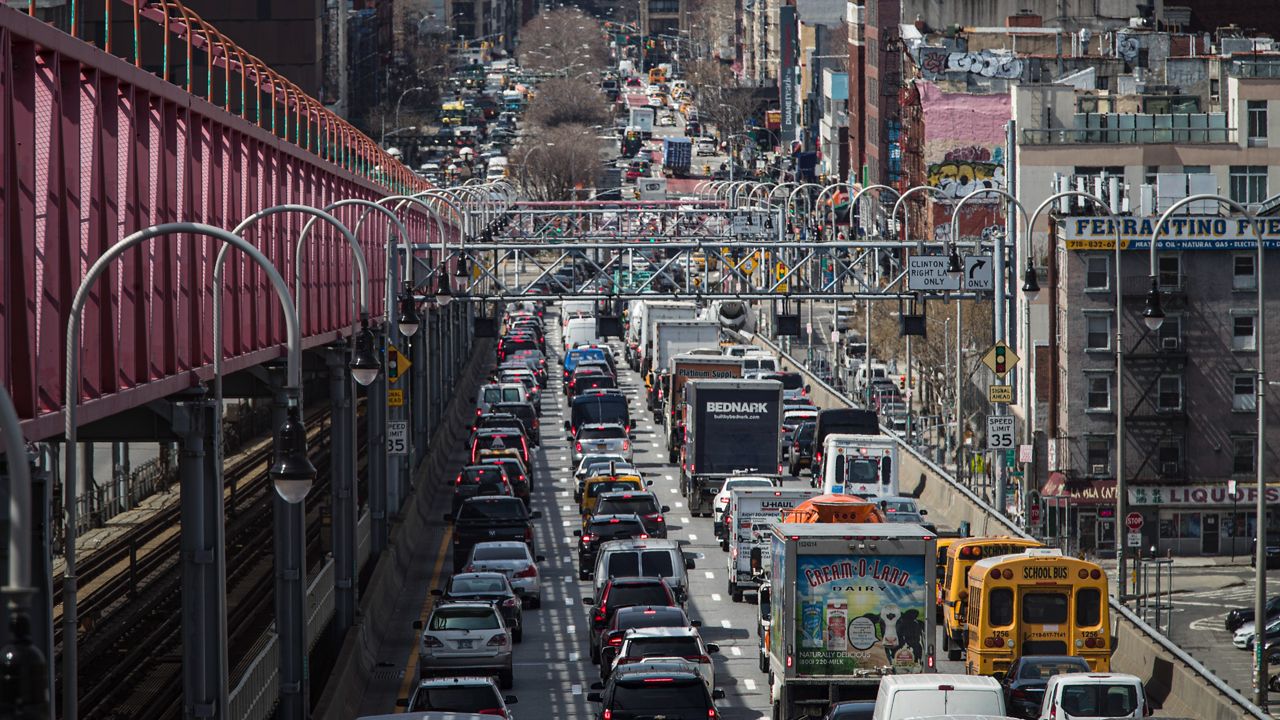 Fewer cars, less traffic and easier parking in Manhattan — those were some of the findings from transportation officials studying multiple plans for congestion pricing, a proposed fee on drivers entering Manhattan’s busiest streets at the busiest times. Plans studied by the MTA looked at fees ranging from $9 to $23.

The effects of the different Manhattan tolling plans were part of the environmental assessment from the MTA and state and city departments of transportation released Wednesday.

“This is good for the environment, good for public transit and good for New York and the region,” MTA Chairman Janno Lieber said in a statement.

The proposed congestion pricing zone covers all of Manhattan at and below 60th Street, with exemptions for the FDR Drive and West Side Highway/Route 9A.

The number of vehicles entering the congestion zone would decline between 15% and 20%, using pre-pandemic data from 2019.

There would be thousands of commuters no longer driving into work in Manhattan’s core, anywhere from 12,571 to 27,471 fewer auto trips each day — a 5% to 10% decrease.

And daily truck traffic in Manhattan’s core would decline anywhere from 21% to 81%, meaning thousands of trucks will no longer drive through Manhattan.

The MTA would experience a modest ridership bump — as much as 2.1% for the subway and 1.6% for buses.

But the proposal did detail changes that could make driving more frustrating.

For instance, there could be an increase in traffic on some highways, like the FDR Drive between East 10th Street and the Brooklyn Bridge at night.

And while parking demand will plunge in Manhattan’s congestion zone, the report says, “there would be increased parking demand at subway and commuter rail stations and park-and-ride facilities outside” of the zone, as well as an increase in parking demand just north of the 60th Street cutoff.

“The demand that’s coming is spread across numerous locations,” a senior MTA official said. “It’s not everybody coming to one spot.”

Meanwhile, taxi and for-hire vehicle drivers — who already have to charge customers a congestion fee for trips that enter Manhattan south of 96th Street, then remit that tax to the state — were singled out in the analysis as a group that would take a heavy hit in congestion pricing.

Both surcharges would apply for now, and the report notes that congestion pricing “would result in a decrease in revenues that could lead to losses in employment.”

The study details seven different tolling scenarios, each with different exemptions and prices, to see how each meets the goals of congestion pricing: raise at least a billion dollars for the MTA’s major capital projects and cut down on traffic in Midtown and lower Manhattan.

The least expensive toll for drivers examined — $9 at peak times — comes with the least amount of exemptions.

A driver who pays $9 to enter Manhattan would get charged once a day, plus pay any other toll on the city’s bridges and tunnels, the report said. Taxi and for-hire vehicle drivers would be charged as many times as they enter the congestion zone.

The high end examined by the MTA — $23 to enter the Manhattan zone at peak times — comes with many exemptions, including charging taxi and for-hire vehicle drivers just once per day, exempting buses, and deducting the cost of bridge and tunnel tolls from the congestion toll.

The MTA plans to hold six virtual public hearings on the environmental assessment at the end of August. Members of the public can sign up to offer testimony at the hearings at mta.info/CBDTP, where the MTA will also broadcast the hearings will also on the following dates and times:

You can also submit additional comments by email, mail, phone, and fax.