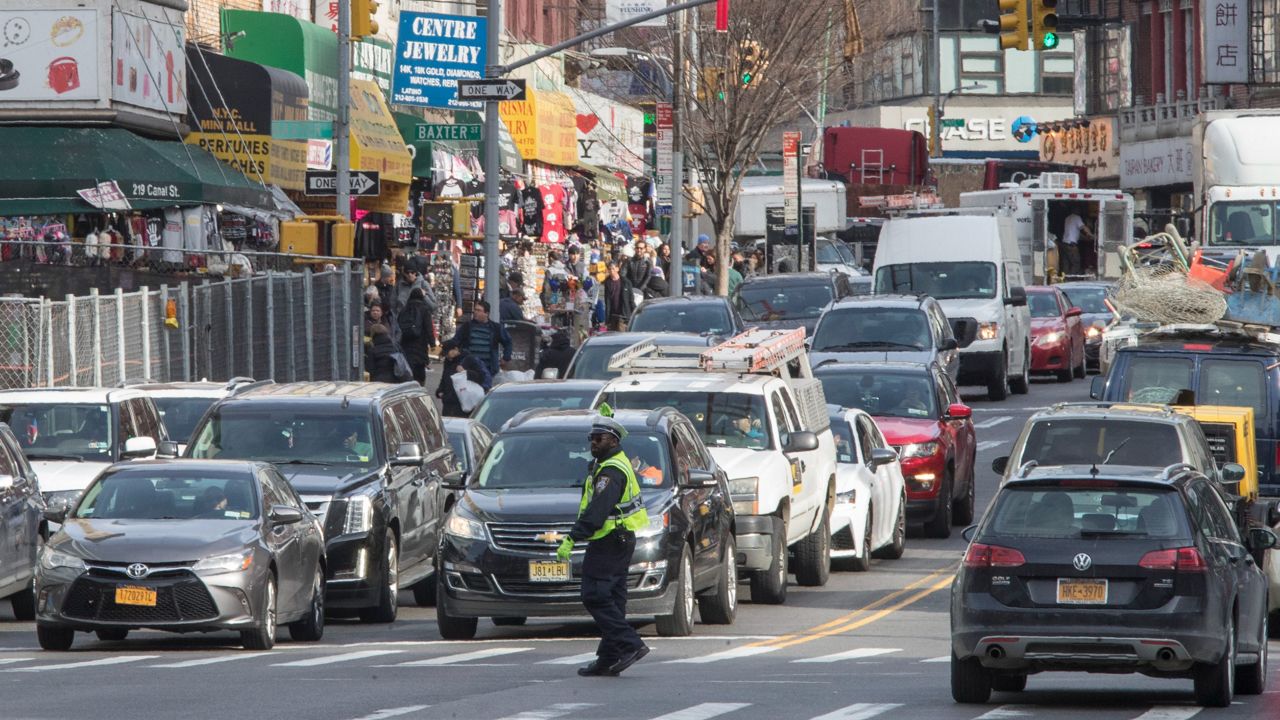 In this May 28, 2019 photo, a police officer directs rush hour traffic on Canal Street in New York. (AP Photo/Mary Altaffer)

MTA appoints board to recommend tolls, exemptions for congestion pricing

NEW YORK—MTA Chair and CEO Janno Lieber announced on Wednesday that his agency has appointed five members to a Traffic Mobility Review Board that will recommend price for tolls, as well as any discounts and exemptions, for its congestion pricing plan.

The agency said the role of the TMRB will be to recommend a toll rate that takes into consideration things like traffic patterns, public safety, off-peak rates and environmental affects, as well as ensure funds for the MTA’s capital program. The TMRB’s recommendation will then be presented to the MTA board, who will determine the final toll price.

The TMRB will be made up of a chair member and five other members. Five of the six members were revealed by the MTA on Wednesday. Mayor Eric Adams will recommend the sixth member, the release said.

“Today’s announcements demonstrate that, with Gov. Hochul’s strong support, the MTA is forging ahead to implement Congestion Pricing,” Lieber said in a release. “We have overcome huge hurdles and are ready for public comment and a second phase of hearings once the FHWA shortly releases the EA document. And the experienced, talented and diverse group we have selected to serve on the state-mandated Traffic Mobility Review Board (TMRB) will be there to factor it all into their deliberations about pricing, discounts and exemptions.”

According to a release, the MTA will hold six virtual public hearings to listen to the riders’ feedback on congesting pricing, between Aug. 25 and Aug. 31. Comments online will also be accepted, according to the release.

The plan comes amid financial uncertainty for the MTA. State Comptroller Tom DiNapoli announced earlier this month that  MTA ridership is "not recovering as hoped" and the transit authority faces difficult decisions that could leave the public transportation system in debt for decades.

However, the revenue generated from congestion pricing - a projected $15 billion over the next few years - by law must fund the MTA’s Capital Program, which the agency uses to maintain and upgrade its transit system - for example, signals, rail tracks and subway stations. State law requires that money cannot go towards the looming $2.5 billion operating deficit in two years that the MTA is facing from decreased ridership. Officials said they may ask state lawmakers to raise taxes to pay for it rather than triggering fare hikes and layoffs.

Reporting from Nia Clark was included in this report.