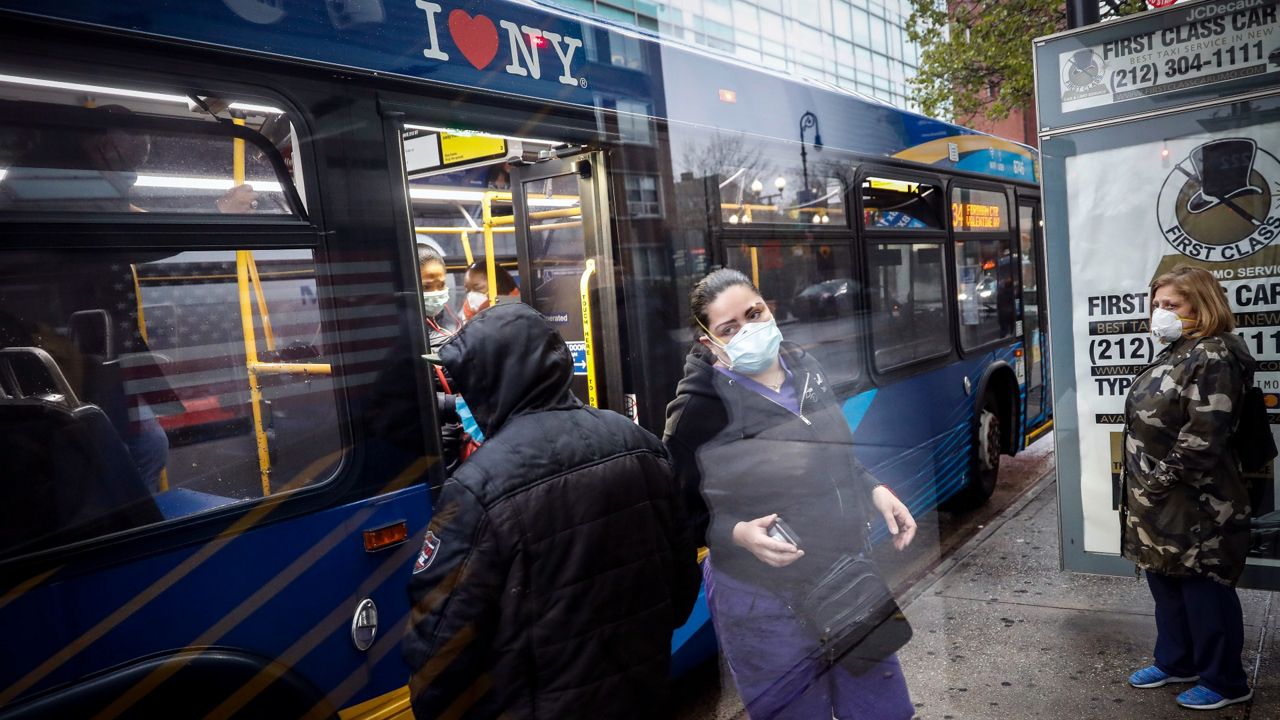 Customers wear personal protective equipment while boarding and departing an MTA bus as it operates without fees, Friday, April 24, 2020, in the Bronx borough of New York. (AP Photo/John Minchillo)

The joint effort will bring faster and more reliable bus service, according to the mayor, and 150 miles of new and enhanced bus lanes over the next four years.

It will begin with 20 miles of bus lanes in 2022 that will increase daily ridership to approximately 327,000 New Yorkers, Adams said.

“This partnership is the definition of ‘Get Stuff Done,’” Adams said. “Together with the MTA, we are delivering the efficient, reliable bus network and transit system all New Yorkers and visitors to our great city deserve. And we will work closely with communities every step of the way to take these much-needed, bold steps together.”

The new bus lanes include:

• Fordham Road and 207th Street, between 10th Avenue and White Plains Road in Manhattan and the Bronx (3.0 miles);

• Gun Hill Road, between Bainbridge Avenue and Bartow Avenue in the Bronx (3.8 miles);

• University Avenue, between Kingsbridge Road and Washington Bridge in the Bronx (3.4 miles);

• Avenues A and D, various segments in Manhattan (1.0 mile);

• 21st Street, between the RFK Bridge and the Queensboro Bridge in Queens (3.4 miles); and

• Northern Boulevard, between Broadway and 114th Street in Queens (5.4 miles).

“New Yorkers deserve a world-class transit system, and both the MTA and city leadership are committed to working together to bring real, tangible improvements for our riders,” Lieber said. “This is a new era of city-MTA collaboration that will speed up buses, make the subways safer and more reliable, and prioritize equity and accessibility in mass transit.”

Additionally, the Department of Transportation announced the expansion of enforcement and transit signals where 100 bus lane cameras will be installed citywide. The MTA says it will expand the Automated Bus Lane Enforcement program to help site violations on bus lanes from the current 123 bus routes to 200 buses by 2022, and 750 more intersections by next year.

The department says they plan to make permanent the pilot program that created the Main Street bus way in Queens in Jan. 2021. The bus way has increased bus speeds by up to 50% with 155,000 riders per day, according to the mayor’s office. Authorities say the next round of new bus lanes for the Bronx, Brooklyn and Manhattan will include the advice of community outreach.

The MTA and the city will also expand the Subway Safety Plan by committing $200 million to improve subway countdown clocks, public announcement systems, and integrate LCD signage at 71 subway stations, according to Adams.

The project is in the design phase and will be rolled out in the following neighborhoods:

• Tremont and Kingsbridge in the Bronx;

• Midtown Manhattan and Lower Manhattan; and

• Jamaica and the Rockaways in Queens.

The MTA added that the city loses over $100 million in revenue per year because of fare and toll evasion. To combat fare evasion, they say they plan to work closely with the city to expand fare initiatives like the Fair Fares program, Freedom Ticket, and CityTicket for Metro-North and Long Island Rail Road to make the transit system affordable for New Yorkers.

“With this comprehensive plan, New Yorkers will have the fast, reliable, affordable, accessible, and safe transportation we need. Efficient public transit is also an engine of economic growth: As our buses accelerate, so too does our recovery,” Assembly member Jenifer Rajkumar said.