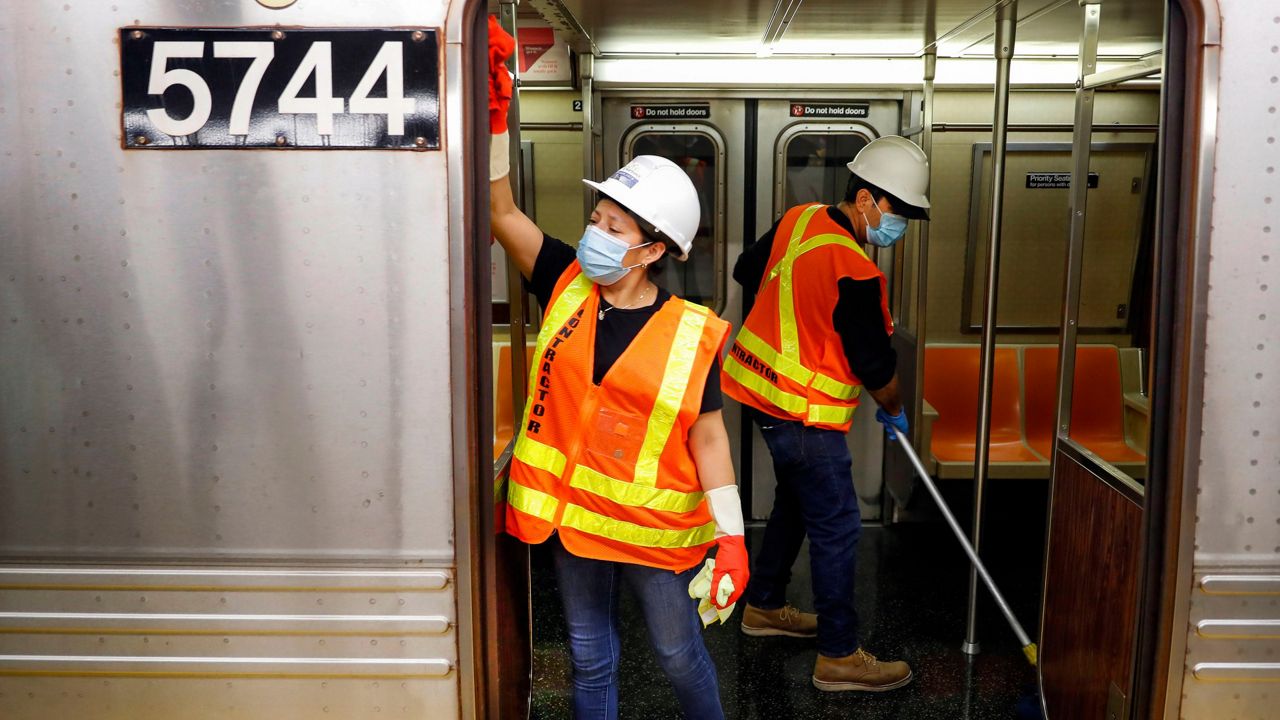 The city’s 24-hour subway service will resume on May 17 for the first time since it was suspended for overnight cleaning last May, Gov. Andrew Cuomo announced Monday.

"Today is a milestone for New York state and a significant moment of transition," Cuomo said. "We are at a point now where we are going to take a major step in reopening."

Now, the hard part might be keeping the subway clean and safe, without the aid of a nightly closure that has allowed the MTA to disinfect stations and trains, and prevented people from seeking shelter in the system

"We've gotten really good at what we're doing and we do it pretty efficiently, but we'll have to see how it goes as riders re-enter the system at larger and larger numbers," Sarah Feinberg, interim president of NYC Transit, said.

It has relied on an army of private contracted cleaners to scrub, spray and wipe down train cars and stations. The head of NYC Transit said it is possible the agency will continue to use them in the future.

It's unclear, however, if the MTA will increase the ranks of its own cleaning force.

"We haven't made any decisions at this point to hire additional cleaners. We'll see how it goes," Feinberg said. "Certainly, from my experience, I want cars to be entering the system clean, but we're also cleaning cars multiple times a day."

Union officials say they are understaffed, and need more cleaners hired to keep the subway as clean as it is now, when full overnight service returns.

"They need to hire cleaners and put them to work so they can provide a clean, safe product to the riding public and get them back," said Matt Ahern, Transport Workers Union Local 100's division chair of the MTA's Car Equipment Department.

Officials with the transit workers union say they are at least 150 positions short of what's budgeted, and that train cars are pulling out of terminals, without every car being cleaned.

"If I have two cleaners to do an eight-car train, and they're doing two a piece, that means four cars are running the entire length of the run, untouched and that's our issue. We're low on staffing," Ahern said.

The subway now often carries more than 2 million passengers a day, and the MTA is launching a campaign, Take the Train, to get New Yorkers to choose mass transit when returning to offices and nightlife.

"The MTA is spot on by encouraging people to come back," said Lisa Daglian, director of the Permanent Citizens Advisory Committee to the MTA. "Getting people back on board is going to be one of the most important ways that we can help our region recover."

Fortune Gontran said he can’t wait for the MTA to be back to normal.

His mom is in need of around-the-clock home aide care, but he can’t hire anyone until he knows they can get there. But Gontran said it's even bigger than that. He believes it will be a moral boost for New Yorkers.

"People are used to always being able to access the subway, and mentally, it will kind of be an emotional shot in the arm for people to know that they have around the clock subway service," he said.

Gin Chang is a hospital worker and has been relying on Uber and Lyft to get him home after his shift.

"In the night, especially when you are either going back to work or going to work, you want to save a little bit of money. Especially after 10 p.m. the subways are just not working well. I think this will be vital for us," Chang said.

Sergio Derameaux said there is no recovery of New York without the subway.

"I think it is a really tough, delicate balance that we are going to face, even more so with things opening up, about what is right scientifically versus what is right economically," Scheflin said.

Cuomo also said that most coronavirus capacity restrictions on restaurants, theaters, bars, retail stores, gyms and offices will be lifted beginning on May 19, a sign the city is returning to normal more than a year after the coronavirus struck.

The reopening plan is in coordination with New Jersey and Connecticut.

“We live in a tri-state area, New York shouldn’t be a competitor or an encumbrance to New Jersey or Connecticut,” said Cuomo. “The coordination is important because we’re a mobile population.

Although businesses can choose if they want to operate without capacity restrictions, the governor said they must continue to keep customers at least six feet apart, a requirement that will make it difficult for many businesses to operate at pre-pandemic capacity levels.

“If the CDC changes their guidance, then we will change our guidance,” said Cuomo referring to the CDC's guidance on social distancing.

However, if the event or establishment can show proof of vaccination or recent negative tests, then the six feet rule does not apply, according to the governor.

Cuomo said that with more businesses returning to pre-pandemic hours, subway service needs to accommodate employees who rely on mass transit to get to and from work.

“Workers are going to need to get back and forth, now you’ll have people working until 4 in the morning again,” said Cuomo.

The announcement comes after elected officials, including Sen. Chuck Schumer, called on the state to fully reopen the subway system.

"We're the city that never sleeps, in part, because of our 24/7 subway service. It makes all the sense in the world to bring this full service back ASAP, so on behalf of workers and riders, I am glad the MTA is heeding my call and fully reopening the subway to get this city back on track," Schumer said a statement a day after calling on Cuomo to fully reopen the system.​

During the height of the pandemic last year, the MTA closed the subway down from 1 a.m. to 5 a.m. to give workers enough time to clean and disinfect the trains. In February, the MTA started a phased reopening and reduced the cleaning period to just two hours, from 2 a.m. to 4 a.m.

"Riders organized and won back 24/7 subway service,” said Betsy Plum, executive director of the Riders Alliance. "After more than a year of punishing overnight commutes that impacted tens of thousands of essential workers, New Yorkers will see a long overdue return to a crucial part of normalcy."

Earlier this month, the CDC announced that because COVID-19 spreads mainly through droplets, there is little benefit to continuous scrubbing and disinfecting.

Editor's Note: An earlier version of this story misstated the subway shutdown hours. The daily closures lasted until 5 a.m., not 6 a.m.