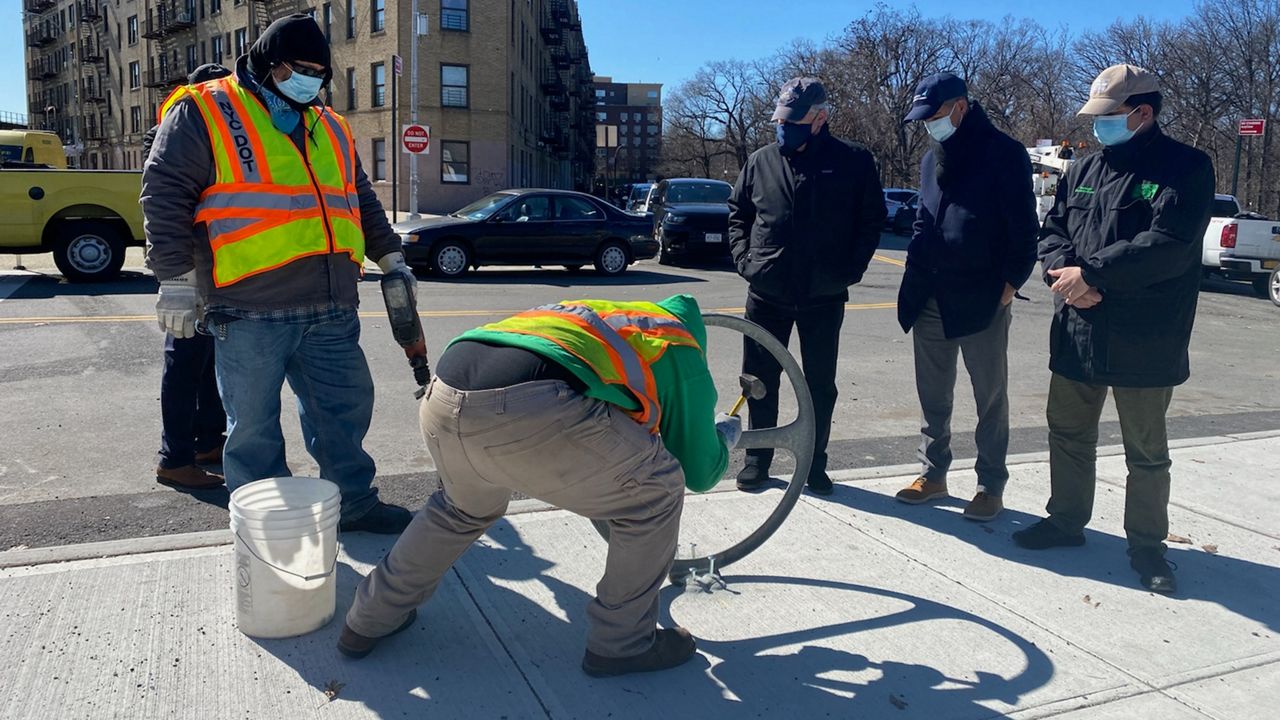 Six new bike racks were installed at the entrance to the Bronx River Greenway. Now, just 9,994 to go.

It's the beginning of the new city transportation commissioner's goal of installing 10,000 bike racksover the next two years, with each rack providing space for two bikes.

"This is the symbolic start of that process," Commissioner Hank Gutman said. "But you should know that as we speak, bike racks are being installed all around the city, I think we're up to 300 by the end of this week."

"I personally would rather bring my bike into an operation if I can. If not, I need that bike rack," Daloia said.

The DOT is soliciting ideas for where bike racks should be installed, and Daloia already has submitted his suggestions.

"I like it to be at intersections, hubs and business areas," he said.

Daloia sees the racks as more than a convenience. He considers them a symbol that there are cyclists like him in the East Bronx, where car ownership is higher than in many other parts of the city.

"What's more important to me is, the visibility of the bike racks to some of the communities that they see there are cyclists out there," Daloia said.

Daloia says cycling on Bronx streets is different than in Manhattan.

"I live in Throggs Neck, East Bronx, and basically the east side of the Bronx River has very few bike lanes and absolutely no protected bike lanes," he said. "There are some greenways."

The Transportation Department is hoping to change that, with lanes on Bronxdale Avenue, Southern Boulevard and White Plains Road.

"Those will happen this year. We are looking at least one other major corridor in the East Bronx to do a bike lane," said Nivardo Lopez, the DOT's Bronx commissioner. "We're still working on the details on that."

The lanes are going in as the city is about to launch a test run of an e-scooter share program in the East Bronx, meaning more wheels on the road - wheels that do not belong to cars.

"So why the Bronx? Well, one of our objectives, one of our priorities is to bring alternatives to automobiles, to bring e-mobility, cycling, all such services to the underserved communities of the city," Gutman said.