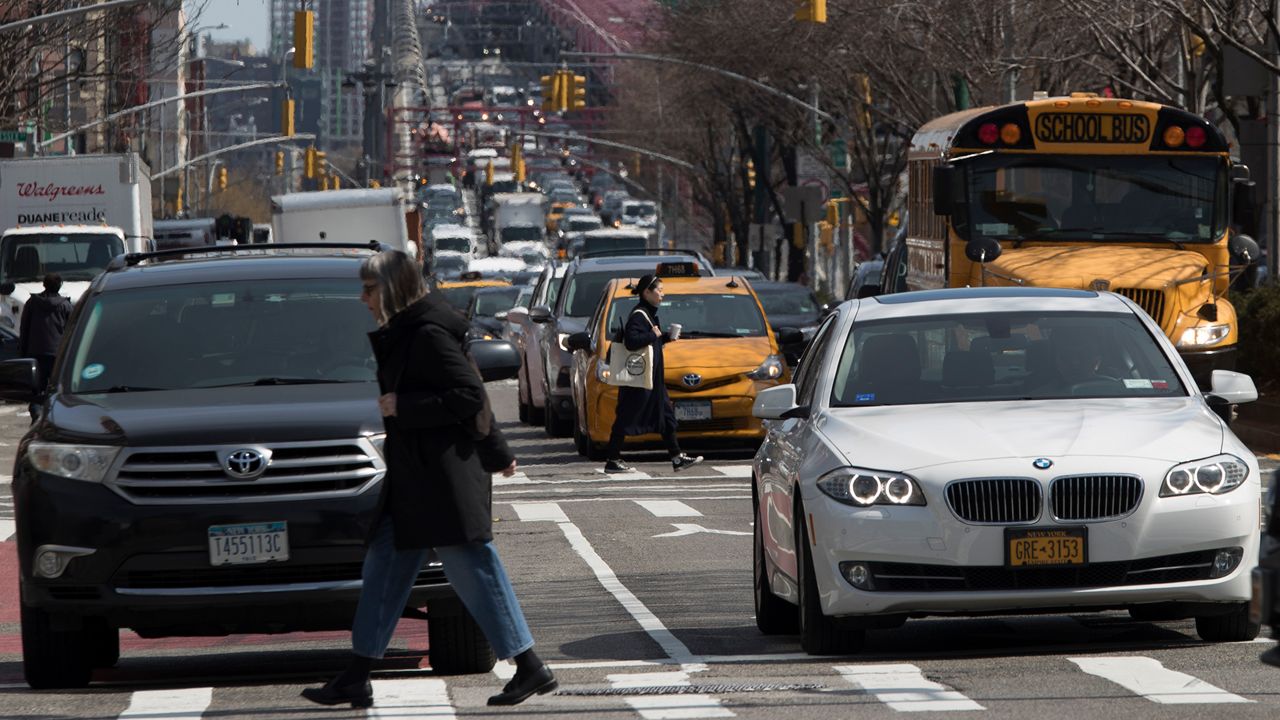 A file image of congestion near Delancey Street in Manhattan on March 28, 2019. Photo: AP

Gov. Andrew Cuomo confirmed Thursday that the congestion pricing plan approved in Albany last year needs federal sign off before it can begin.

"I am not holding my breath for them to approve congestion pricing," the governor said at a news conference.

News cycles move at lightning speed in 2019. So #NY1OffTopic is rewinding the clock on some of the biggest NY political stories of the year. Here’s one you may have forgotten about: Congestion pricing. https://t.co/ZTtT242Axs pic.twitter.com/BJofmMU36T

The problem is Cuomo and President Donald Trump have been at odds over a number of issues lately, including funding for the Gateway rail tunnel connecting New York and New Jersey, and the Trump administration's cancelling of "trusted traveler" programs like Global Entry for New Yorkers.

.@NYGovCuomo says the @realDonaldTrump Administration will likely hold congestion pricing hostage. New York State needs federal approval to implement it, putting the January 2021 deadline in doubt as Cuomo and Trump have been sparring over a Number of issues.

Congestion pricing would charge driver's a fee to enter Manhattan below 60th Street. It was set to take effect in January of 2021, but without federal approval it may not happen at all, or could certainly be delayed.

"We do need to ensure the federal government approves it. I am hoping that the professional folks and reason will prevail — that doesn't always happen in Washington," de Blasio said on WNYC's The Brian Lehrer Show. "If that doesn't happen, then I am hoping for an election result that will change things in November."

We asked why the federal role did not become an issue until just this month, after every angle of congestion pricing was widely discussed and debated before it passed last year.

"Theoretically there are some federal components. Some roads are federal," the governor said. "But where is the federal responsibility in pricing the MTA? The federal role doesn't really exist. So we assumed it was perfunctory."

Asked whether anyone foresaw the federal government blocking congestion pricing before it was passed, @NYGovCuomo says they assumed federal sign off was “perfunctory.”

The federal government can require an environmental review before allowing congestion pricing to begin. But it must also approve the plan in the first place. And so far it has not given the state any guidance on how to start that process.