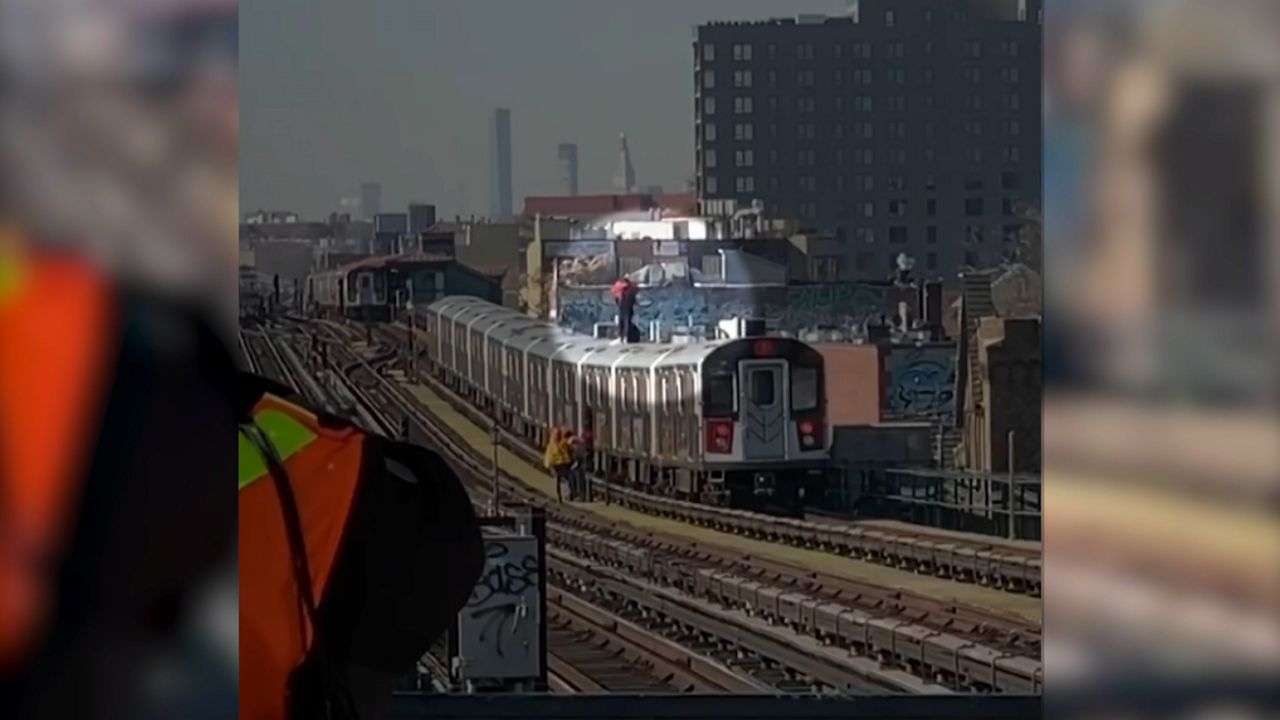 An image of people surfing on a 7 train in Queens last month.

Subway Surfing Towards a Potential Death: MTA Rails Against Hundreds of Daredevil Acts

Commuters like Francisco Navas know subway surfing is dangerous. And yet, he sees it happen all over social media.

Thrill-seekers risking their lives by riding on top of subway cars, like two people, seen on video and in the image above, surfing on a 7 train in Queens last month.

It could have deadly consequences. Police said a 14-year-old boy died November 23 after hitting an object while surfing on a Manhattan-bound train at Queensboro Plaza.

It's more common than riders may think.

"I would have to guess multiple times a week this is going on. And that's what we know about," said Laurence Freader, the vice president for train dispatchers for the Subway Surface Supervisors Association.

According to internal MTA figures obtained by NY1, MTA crews reported 597 cases since 2017 of someone caught riding outside of, or in between, train cars. 190 incidents were reported this year through the end of October.

It is not only risky; it forces a conductor to trigger an emergency brake.

"For a dispatcher, that might mean running no service or rerouting trains or extending the headway, maybe from five minutes to 10 minutes or more, depending on how severe the situation is," Freader said. "And in the middle of all that, still trying to get people to work and where they have to go."

MTA data shows there were nearly 2,700 train delays and trip cancellations because of subway surfing since 2017. Almost half of those delayed trains were from trips in the first 10 months of this year.

And with social media, there is now an audience for these illegal and dangerous exploits.

"Some of these people here think, 'Oh, I can go and do this sort of thing and this is going to go viral and all of this stuff,' when it's really just a super-dangerous, dumb idea in general," urban explorer Joseph Anastasio said.

The MTA has been warning riders, with decals and announcements, to stay inside train cars.

"We’ve really stepped up our education campaigns and our public service announcements around it, again on trains, in stations, on our online forums," said Sally Librera, the senior vice president of subways for New York City Transit. "This is highly, highly dangerous behavior. We want to stop it with every single instance."

The MTA says all cases of subway surfing are referred to the NYPD for enforcement.

Why Transit Advocates Are Pushing to Reopen Shuttered Subway Entrances