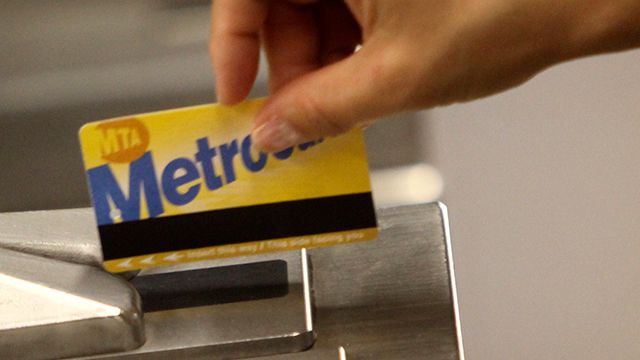 Mayor Bill de Blasio is rolling out New York City's new program to offer half-price MetroCards to low-income New Yorkers, but it is only going to help a fraction of the city's eligible residents at first.

De Blasio shook on the city's budget deal last year, agreeing to include money for half-priced MetroCards for low-income New Yorkers. But even then, there were questions about who would be eligible and how the program would work.

"That's what we are going to work on now for the next six months, preparing to make this launch January 1," the mayor said June 11, when announcing the budget deal.

Six months later, and four days past the expected launch date, many of the same questions about the "Fair Fares" program remain — and even more so now that the mayor has said only a small fraction of the 800,000 low-income New Yorkers who may be eligible for the discounted cards will actually get them anytime soon.

"The subway system began in 1904," the mayor said at a news conference introducing the program Friday. "There has never been a time that low-income New Yorkers got discount MetroCards like this."

WHO WILL BE ELIGIBLE FOR THE HALF-PRICED METROCARDS?

Reading the fine print in the release now. Apparently only NYers who get cash assistance (about 30,000 people) will get the 1/2 price Metrocards first. NYers who get food stamps have to wait until April.

"The turnstile can be the door to unlimited opportunity if you can get on, and we are just giving you the keys to open that door," City Council Speaker Corey Johnson said at the news conference.

The mayor could not say when other low-income residents may get the cards, or who would be eligible.

Still not clear why this entire group can't get these 1/2 price Metrocards right away since their eligibility has already been determined. No word on when and how low-income New Yorkers who don't get federal assistance can apply for these discounted cards.

"I understand that reporters or anybody else might say, 'Why can't things be more instantaneous?' But you would also say, if something went wrong, 'Why did something go wrong?'" de Blasio said. "We're trying to use the first 30,000 to make sure the whole system will work."

There is some serious heckling and side talk at this news conference from a vocal crowd of New Yorkers hanging in the 125th St subway station to listen to this news conference. "Time for new leadership," one man just called out as @NYCSpeakerCoJo spoke.

Seriously, what is going on in the mayor’s office on #FairFares? He’s had months to figure it out — after months of negotiations that preceded the @NYCCouncil landmark vote. What was all that talk for? Now he wants to jettison the immigrant NYers he claims to support? No.

Advocates who appeared at the mayor's news conference Friday made it clear they want him to act quickly.

"We need a timeline that is quick, that is aggressive about implementing 'Fair Fares,'" said John Raskin of transit advocacy group Riders Alliance.

"Now it is up to the mayor to make good on his side of the bargain," said David Jones, an MTA Board member and a member of Community Service Society.

In defending the rollout of "Fair Fares," de Blasio suggested that creating the program was actually harder to pull off than the launch of universal pre-kindergarten.

UPK was a tremendous lift. Teachers had to be hired. Physical spaces had to be procured. Hard to imagine Fair Fares being more complicated.