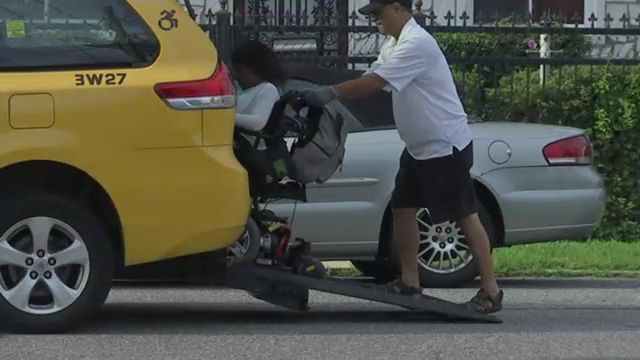 For Valerie Joseph, the subway and the buses are a no-go when it comes to commuting to and from her home in Queens Village.

"It's too much," she said. "From here, I would have to go four blocks, take a bus, then to the train. About two hours."

But a ride-hailing app called Curb that's being tested by 1,200 paratransit users like Joseph now gives them quicker access to taxis that are equipped for commuters with disabilities.

A taxi arrived within two minutes of Joseph punching in a request on her mobile device.

"It would be beneficial for everybody to have that option," she said.

Riders in wheelchairs and scooters called on the MTA at recent meetings to expand the program and make it permanent, saying it's a vast improvement from having to book an Access-A-Ride trip at least a day in advance.

"It's really revolutionary because this program has been awful," said Joe Rappaport of the Brooklyn Center for Independence of the Disabled. "The worst day on the subway is better than the best day on Access-A-Ride."

"It gives more business to the accessible cabs," said Gabriela Amari of the Brooklyn Center for Independence of the Disabled. "And we get on-demand hail, which we've been wanting forever."

The MTA has spent more than $60 million on the the pilot program since starting it last year, and it now has to figure out how to expand it in a financially feasible way.

Access-A-Ride currently serves 140,000 customers. The average per-ride cost to the MTA is about $70 a ride. While advocates say shifting to accessible taxis could cut that cost in half, the MTA disagrees.

"Twelve hundred represents just a small fraction of our overall Access-A-Ride user base and customer base. So we are committed to finding ways to expand that," said MTA board member Veronica Venterpool.

Joseph says that can't come soon enough, since she's no longer having to book rides far ahead of time.

"Access-A-Ride rightly deserves its currrent nickname, which is 'Stress-A-Ride.' But with on-demand service offered to everyone, it will change its nickname to 'Success-A-Ride,'" Rappaport said.

All told, the trip from Joseph's home in Queens Village to here in Downtown Brooklyn took one hour and three minutes - a speedier commute, the goal of every New Yorker.