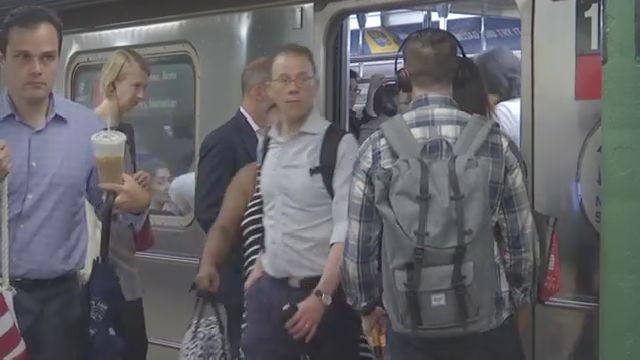 New Yorkers are stepping off the subways and finding other ways to get around.

The MTA reported Monday that ridership fell by 30 million people last year to 1.72 billion, in part because of chronic delays.

"It just takes longer to get to work sometimes, more than before," one commuter said. "It's just too much, too much of a hassle."

"You're not getting your money's worth in the subway," said another.

It was the second straight year ridership fell after peaking at a record-1.76 billion in 2015. The trend appears to be accelerating, as total trips are down 2.1 percent in the first five months of 2018.

More people are driving, and using e-hail services like Uber and Lyft.

Still, many straphangers are simply turned off by so many delays and lots of construction in the system.

"I can't tell you how many people who walk down into a station see a wall of diversion notices and say, 'I'm not dealing with this,' and go up and hire a car," MTA Board Member Andrew Albert said Monday.

On Monday, the MTA dissected the troubling trends at its monthly committee meetings and discussed how the agency might respond.

"It used to be that we would look at employment projections for Manhattan. The direct relationship between employment growth and ridership growth was something we could rely on for projections," said Tim Mulligan, the executive vice president of New York City Transit. "We're getting more sophisticated. We have to look at a multiplicity of factors."

The drop has been sharpest outside of Manhattan, with ridership falling by more than 8 percent in the Bronx and close to 7 percent in Brooklyn. The reliance on for-hire vehicles and taxis has also been strongest in the outer boroughs.

Officials said they're also baffled by the sharp decrease in the number of city schoolkids using the transit system.

This year alone, student ridership on the subway is down by more than 6 percent and double that figure on MTA buses.

But transit officials said Monday that they were optimistic that the figures could bounce back, especially if financing can be secured to fund long-term fixes to the system.

"It's critical work, work that has to be done," Byford said. "Ultimately, we'll, I believe, see people come back to the subway and the buses as we progressively modernize New York City transit."

That is a goal that, on days plagued by delays, can feel distant.

A look at the plan to fix NYC's transit system