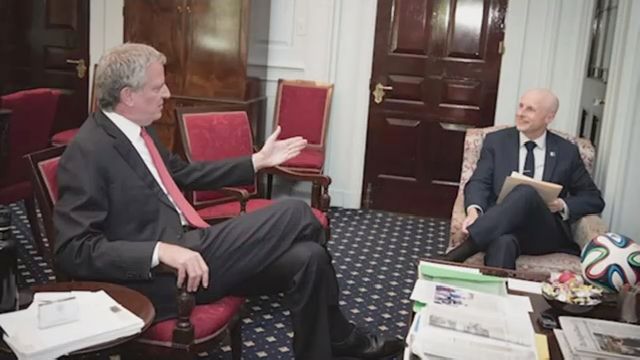 Andy Byford came to town six months ago with a long to-do list for improving the city's lifeblood: the subway system.

"I'm going to seek an early meeting with city officials," he said early on.

But until Tuesday, the new head of New York City Transit had not had word one with the city's top official, Mayor Bill de Blasio.

"A bit weird," is how Byford put it in a recent New Yorker profile.

That changed in a 90-minute sit-down at City Hall on Tuesday in which Byford made his case for city help in funding his multi-billion dollar subway rescue plan.

"What could be more important to the future of this city than an effective transit system?" Byford said in a press conference after the meeting. "So I don't think anyone can sit on the sidelines. I don't think that anyone can absent themselves from the discussion or from the funding commitment."

"The key for me is the funding piece. Everyone must have skin in this game." That's NYCT Prez Andy Byford after he met with ⁦@BilldeBlasio⁩ for more than an hour. More later ⁦@NY1⁩ pic.twitter.com/hkV9Pg3LfE

Byford, like the subway system he run, has been caught in the middle of the feud between the mayor and Gov. Andrew Cuomo.

The governor oversees the MTA and the transit system, but he has demanded that the city pay more to fix it. The mayor has refused, saying the state has diverted funding.

Given that history, de Blasio said before the meeting it was not surprising he had not yet spoken to Byford.

"I know where the power resides at the MTA," the mayor said at an unrelated press conference. "I'm not going to kid myself or my fellow New Yorkers on that. The ultimate decisions are being made in Albany."

Byford said he left the mayor a copy of his blueprint to rebuild the subway system.

While that battle over money will continue, de Blasio pledged the city's help on what it can control: Stepping up traffic enforcement to improve bus service and creating bus and bike lanes to move riders displaced by next year's partial L train shutdown.

He also promised to keep their conversation going. After all that time of no contact between Byford and de Blasio, the head of transit said he will now sit down with the mayor once every quarter.

Main story image above of de Blasio-Byford meeting via the City of New York.