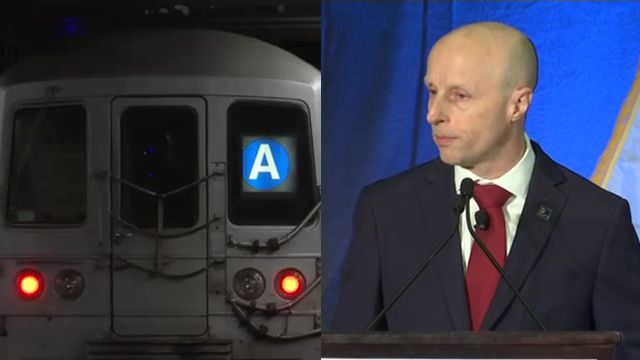 It's been a little more than 100 days since Andy Byford arrived in the city with a big mandate: rescuing the transit system from sliding further into decay.

"I like a challenge, and that's why I came here. But, God, the first few weeks, I think that the scale of this challenge is becoming apparent to me," Byford said.

Days after unveiling a sweeping plan to overhaul the MTA’s struggling bus network, Byford is taking on a bigger challenge: reshaping all of New York City Transit with what he calls a "radical" reform plan.

On Friday, at a gathering of the Regional Plan Association, he offered a peek of what's to come.

"If people thought that that bus plan was radical, and some people did, wait until we release the full corporate plan in just over three weeks," Byford said. "It will be bold. It will be wide-reaching, even controversial in its ambition."

He also said the MTA needs a funding source beyond going again and again to riders, who have grown weary of every-other-year fare hikes.

"You don't have to be a native New Yorker to know that something is seriously wrong with the way this network is functioning today," said Scott Rechler, chairman of the Regional Plan Association.

Hillary Clinton, who also spoke to the associaton, said New York won't be able to compete with other cities unless the subway is overhauled.

"If we don't make these investments now, others will, and we will fall behind," she said.

Albany and City Hall have been battling over how to fund the subway’s overhaul, but Byford showed no interest in choosing sides. Asked where he stands in the long-running feud between Governor Andrew Cuomo and Mayor Bill de Blasio, Byford said very clearly he's staying out of it.

"I'll tell you whose team I'm on: the customers' team, the riders' team," he said.

Transit advocates said that's the blunt approach frustrated straphangers need, even if they have to endure painful service outages in order to make repairs faster.

"Not everybody is going to be happy. But overall, we desperately need a revamp of our transit system," said Jaqi Cohen, campaign coordinator with Straphangers Campaign.

To many subway riders, that’s been painfully obvious for too long.