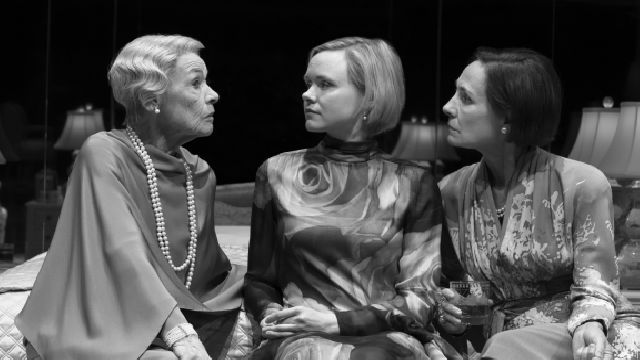 It’s been 30 years since Glenda Jackson last graced a Broadway stage, and the drought at long last is over. Ms. Jackson at age 81 is stunning audiences in her mighty performance in the revival of Edward Albee’s Pulitzer Prize winning “Three Tall Women.”

There are two other great actresses sharing the stage with her — Laurie Metcalf and Alison Pill — and they too are delivering finely nuanced portrayals. But the way that Jackson tears into the role of A, modeled after Albee’s own overbearing adoptive mother, is simply incomparable.

This is the play that revived Albee’s flagging career in the 1990’s. And it arrived with a vengeance. It was, in a sense, an act of revenge - or an exorcism, as he put it — owed to his unhappy upbringing and the inevitable rejection he faced as a young gay man.

Act 1 introduces us to A at age 92, an embittered dowager, frail and imperious. She is assisted by a caretaker and a young lawyer. In Act 2, A is seen as more lucid. She is joined by two younger versions of herself - B at age 52 and C at age 26.

The three women take turns revealing their experiences amid the gradual disappointments and betrayals they encounter at each stage of life. C’s optimism turns into B’s rude awakening; and finally, with all pretenses shattered, A’s chilling wisdom.

Joe Mantello’s astute direction allows the play to breathe and heave in an unrelenting exploration of a life gone sour. Alison Pill touchingly evokes the great expectations of youth. Laurie Metcalf, with her wry delivery, aces both the humor and truth in B’s observations. But Glenda Jackson’s peerless portrait makes “Three Tall Women” an unqualified triumph.

This is a bleakly cynical study of a life seen through a darkly colored lens. And yet, so consummately pure and honest is the work, we’re left, curiously enough, with the uplift one gets from witnessing the confluence of two titans — Albee and Jackson — purging and emoting as only great artists can.