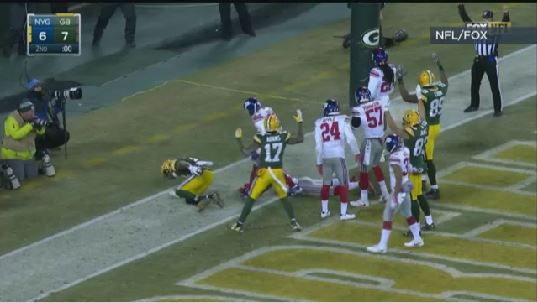 The New York Giants' first playoff appearance in five years turned out to be a short one.

The Green Bay Packers scored 24 points in the second half of their NFC Wild Card Game matchup with New York en-route to a 38-13 win.

The Giants led 6-0 for most of the first half and dominated the Packers on defense, but Packers' quarterback Aaron Rodgers led the home side to 14 points in the last 2:20 of the second quarter.

The two-time NFL MVP capped it off with a Hail Mary touchdown pass to Randall Cobb as the first half expired, giving Green Bay a 14-6 lead at the break.

Big Blue found momentum with a few minutes left in the 3rd quarter, stopping Green Bay on fourth down.

But that was as close as the Giants would get.

About three minutes later, Rodgers found Cobb again in the endzone to extend the Packers' lead to 21-13.

Green Bay scored two more touchdowns in the 4th quarter to pull the game away and secure their place in the NFC Divisional Round against the Dallas Cowboys.

Manning finished 23 of 44, passing for 299 yards for a touchdown and a late interception.

Rodgers threw four TDs to no interceptions on a 25-40 passing night.

The Giants were 11-5 in the regular season, their best record since the 2008 season, and won a Wild Card berth.

New York had hoped history would repeat itself. In each of their last two Super Bowl runs, the Giants beat the Packers at Lambeau Field in the playoffs.

Five years ago, the Giants pulled off a huge upset, beating the top-seeded Packers in the divisional round.

And in 2008, Big Blue beat the Packers in overtime of the NFC Championship game in one of the coldest games in NFL history.