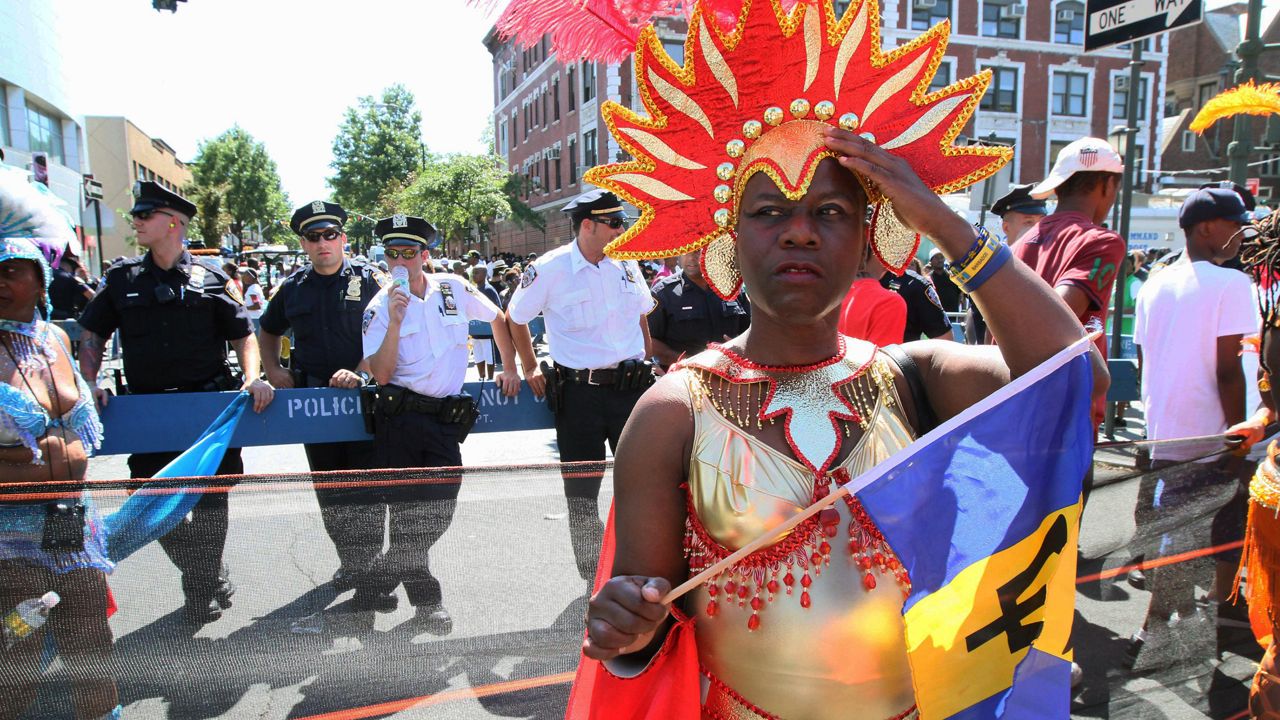 In this Sept. 26, 2010 photo, police stand along the route of the West Indian-American Day Parade as parade participants make their way along Eastern Parkway in Brooklyn. (AP Photo/Tina Fineberg)

Massive crowds are gearing up to pack areas in Brooklyn around Eastern Parkway and Flatbush Avenue for the West Indian Day Parade and other activities.

But the NYPD is gearing up as well.

“A large presence of uniformed cops and community affairs officers will be present and deployed,” said assistant chief Michael Kemper, the commanding officer of Brooklyn South at a briefing Friday.


Throughout the weekend, there will be many events and parties leading up to the J’Ouvert parade at 6 a.m. Monday morning. Many people party all night until that event starts and then the massive West Indian Day parade kicks off at 11 a.m.

“All participants and spectators who wish to participate in J’Ouvert will be required to pass through a security entry point prior to entering the parade route where they are going to be wanded with a metal detector,” said Kemper.

There will be 13 security entry points to the J’Ouvert route.

Police lights are being set up in the area of both parades. There will also be additional police cameras.

Although the events are a celebration of West Indian and Caribbean culture, there has been lots of gun violence over the years.

In 2015, Carey Gabay, an aide to then Gov. Andrew Cuomo, was caught in the crossfire of rival gangs and killed.

His widow still dealing with the pain.

“They need to see that Carey Gabay was one of them,” said Trenelle Gabay. “My late husband grew up in poverty in the Bronx in NYCHA housing and yet he was the first Black president of the student undergraduate council in Harvard and then proceeded to get his law degree at Harvard Law school. His bright light was extinguished by guns.”

In the last few days, NYPD officers in Brooklyn held a cease fire meeting with young people, including gang members, urging them to stop the violence.

“This week in particular the message was very clear, not come out here to fight, to engage in any violence, to carry any weapons,” said chief of patrol Jeffrey Maddrey. “We want to come out and celebrate and have a good time.”

But leave the guns at home, police said.

NYPD bosses say they want people to have fun and cops will not over-police the crowd, but rather help keep the peace so everyone can enjoy the colorful celebration.

The NYPD, at its discretion, will be closing streets and diverting traffic for each of this weekend's festivals. pic.twitter.com/A1r7BMp1WF