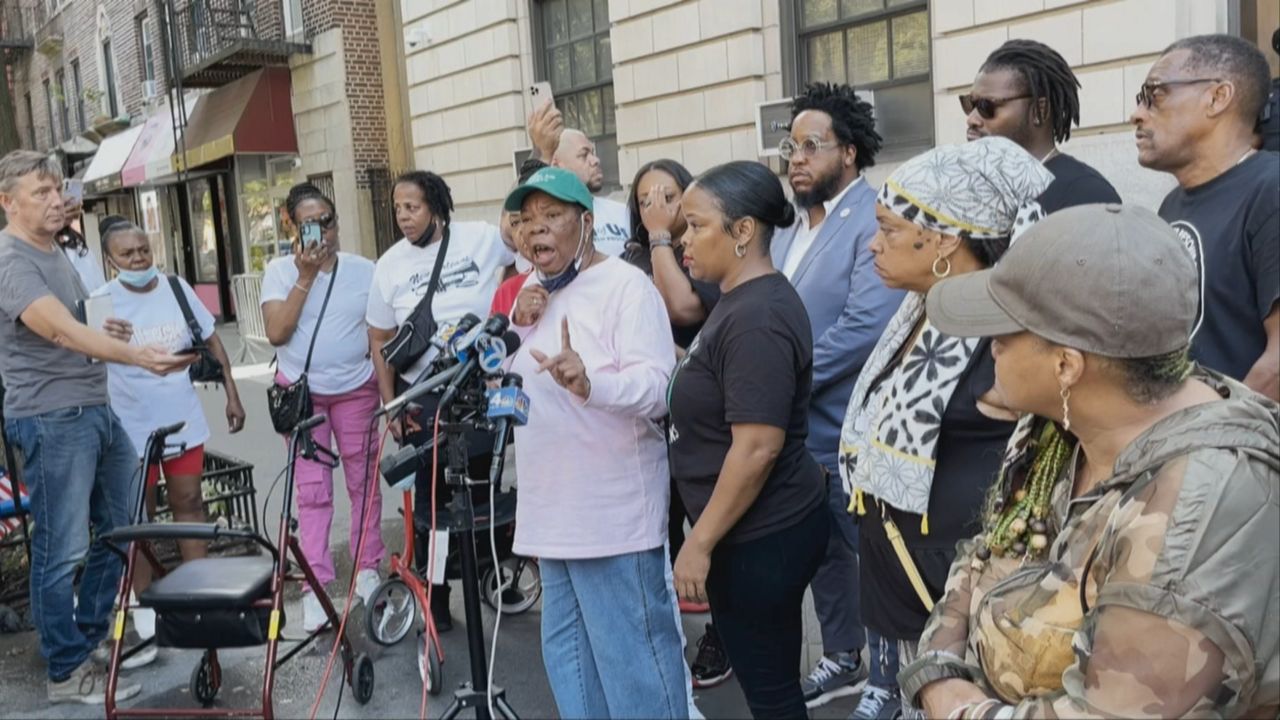 According to the NYPD, 19-year-old Tamani Crum was among multiple people who interfered during the arrest of 22-year-old Elvin James. (NY1 Photo)

A shocking video shows the moment a police officer allegedly slapped a woman while carrying out an arrest in Harlem.

A group of officers were arresting 22-year-old Elvin James, who police say was wanted in connection with an attempted murder that happened last week, when 19-year-old Tamani Crum and several other people started interfering with the arrest, the NYPD said.

At some point during the altercation, Crum struck one of the officers, the department said. The video shows that officer hit Crum, sending her to the ground.


Police say during the arrest, officers found a loaded firearm and a large amount of a controlled substance in James' possession. He faces multiple charges, including criminal possession of a weapon and assaulting a police officer.

Crum was charged with second-degree obstructing governmental administration, according to a criminal complaint filed with the Manhattan District Attorney’s office. Two other women at the scene were also charged for allegedly interfering with the arrest, the NYPD said.

Crum’s grandmother joined the National Action Network in Harlem on Tuesday to condemn the officer involved.

“He wasn’t supposed to touch her. No more,” said Julia Crum. “Lock him up! That’s the only way we will get justice. And justice for Tamani!”

Crum was hospitalized Tuesday night and then taken to central booking the next day. Her lawyer says the officer who allegedly assaulted her acted in an outrageous manner.

“The truth is, he reacted,” said Jamie Santana. “The problem is, he reacted in a manner that was unreasonable and unwarranted. It’s just not consistent with what a reasonable person in his set of circumstances and situation should have done.”

On Thursday, the Manhattan District Attorney’s office said their Police Accountability Unit is reviewing the incident.

Police say one officer also suffered a minor head injury during the scuffle. Crum’s lawyer says he believes the situation could have been deescalated without violence by either side.

“We understand officers have a tough job,” Santana said. “We understand that, and we give full credit to officers who do their job the right way. But this situation could’ve been avoided. It should’ve been handled in a different way.”

Mayor Eric Adams on Thursday, however, defended the officer's actions.

“The young lady came, smacked the police officer, the police officer responded. I think those officers on the scene showed great restraint. They did what the system called for,” Adams said at an unrelated news conference.

“If you look at the video, the young lady was inches away from the person who was armed with that gun,” he added. “That action endangered those police officers, and you can’t do that as a civilian.”

In a statement, Detectives' Endowment Association President Paul DiGiacomo said that “when you assault a New York City detective in order to interfere with an arrest of a man armed with a gun, there are repercussions.” The DEA is exploring a possible civil suit on behalf of the officer against the woman who attacked him.

Meanwhile, Crum’s lawyer says he will make a decision whether to pursue charges against the officer upon reviewing body camera footage.

“If this is a situation in which the officer’s actions deviated from what an officer in his situation should have done, then yes, we fully intend on pursuing civil action,” Santana said.