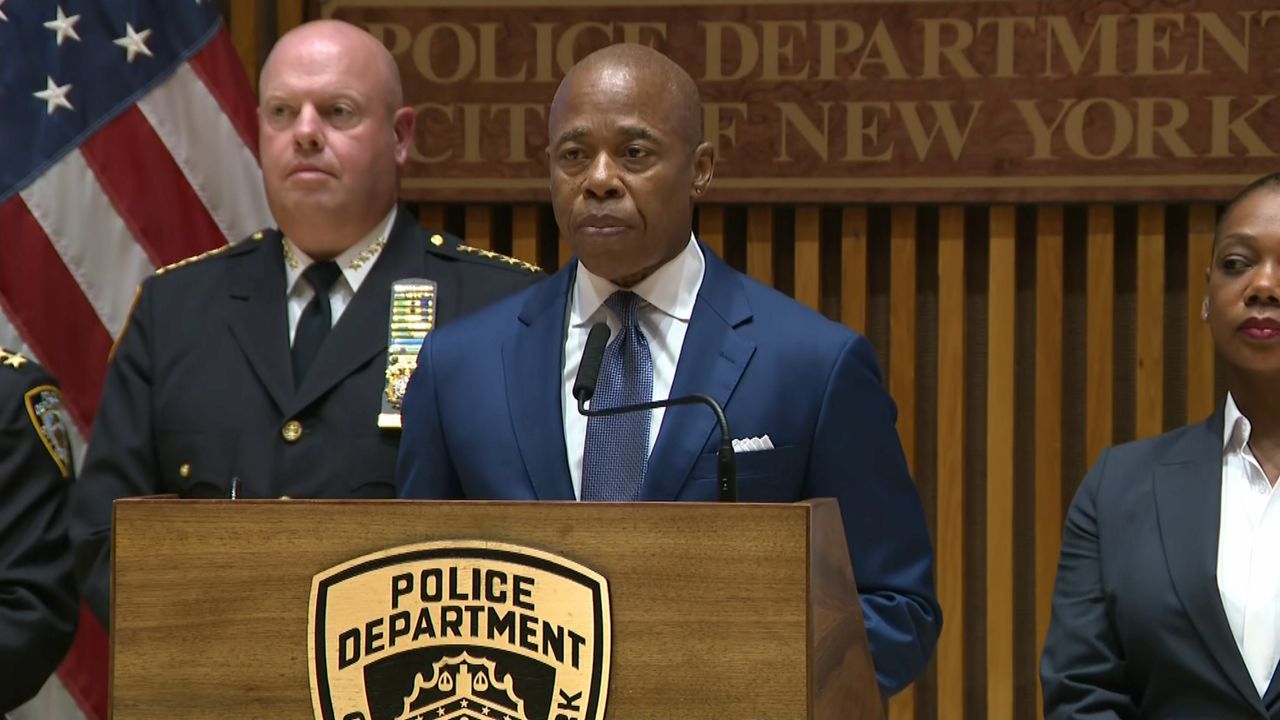 Adams, who in recent weeks has taken aim at bail reform laws, said suspects are too often released onto the streets, only to be quickly re-arrested.

“The hardworking women and men of the NYPD are doing the work, but the overall system is failing New Yorkers by allowing repeat offenders back out on the streets over and over again,” Adams said at a press conference. “Time and time again, our police officers arrest someone who has multiple charges, but no matter how many times this person may have been arrested before, they are often walking free hours later. There is almost no accountability, and that makes us all less safe.

According  to the NYPD, arrests are up 24% this year compared to last year. And just 716 people are responsible for 30% of all gun arrests, leading to the conclusion that just a handful of repeat offenders are to blame.The NYPD also released a list of the city’s top repeat offenders who are accused of committing serious violent crimes this year, including robbery, burglary, and grand larceny.

“This is about recidivists who cause New Yorkers to suffer needlessly,” Sewell said. “Every day as hardworking New Yorkers start their day or night of work or school or to simply enjoy what this city has to offer recidivist criminals are planning or taking the opportunity to commit their next larceny, robbery, burglary or other crime.”

Adams said judges “must do their jobs” by remanding defendants at arraignments when they are deemed a risk to the public.

“The judges have tools that they are not using but they do need more tools such as public safety,” he said. “If public safety is in jeopardy based on the actions of someone, judges need the tools that 49 other states currently have to make sure that person is not dangerous to our community.”

Gov. Kathy Hochul and the state legislature reached an agreement in April on changes to the 2019 bail reform as part of the state budget. The changes give judges more discretion to set bail for certain repeat offenders.

Hochul now says no further changes are needed and judges have what they need.

“And if there is confusion and people don’t understand, I’m sure there is continuing education programs that are out there. We can give more briefings to people. I’m happy to have our policy team work with people because I do think that there is probably a miscommunication, a misperception that things have not changed,” she said.

Adams insists that he and Hochul are on the same page, but he is still calling for changes she will not make.

“I am aligned with Governor Hochul on this issue. That is who I endorsed. That’s who I support and that’s who I believe is a real partner," he said. "Her belief that the judges have the tools they need, yes they have tools that they need. They are not using them. They need to use all of their tools. But they need additional tools in the process as well.”

Democratic lawmakers and advocates have criticized Adams for blaming the city’s crime problem on bail reform.

"This isn’t about them, it’s about the mayor’s inability to deliver his promise to his donors,” Brooklyn State Senator Zellnor Myrie tweeted, referring to crime victims. “He promised them that he’d be tough and that he’d bring crime down. He sold himself as uniquely qualified to do this. But facts are stubborn things. The Mayor and his conservative allies want you to consume a fact-free diet. The facts don’t matter to them. But they should to you. That certain crimes are up is indisputable. That this rise can be attributed to bail reform is completely false and without basis in reality."

The Mayor and his conservative allies want you to consume a fact-free diet. The facts don’t matter to them. But they should to you.

That certain crimes are up is indisputable. That this rise can be attributed to bail reform is completely false and without basis in reality. 5/9

In a statement, the Legal Aid Society said that judges should not be allowed to use what is known as a “dangerousness” standard when making a judgment about whether or not someone should remain in jail.

“Albany must continue to reject the broken record pleas from Mayor Adams and Commissioner Sewell to enact a ‘dangerousness’ provision to New York’s bail statute,” a statement from the Legal Aid Society said "‘Dangerousness’ is, at best, guesswork, replete with biases that have only resulted in the caging of more people of color. Short of a crystal ball, no judge - or human being for that matter - can predict future behavior.”