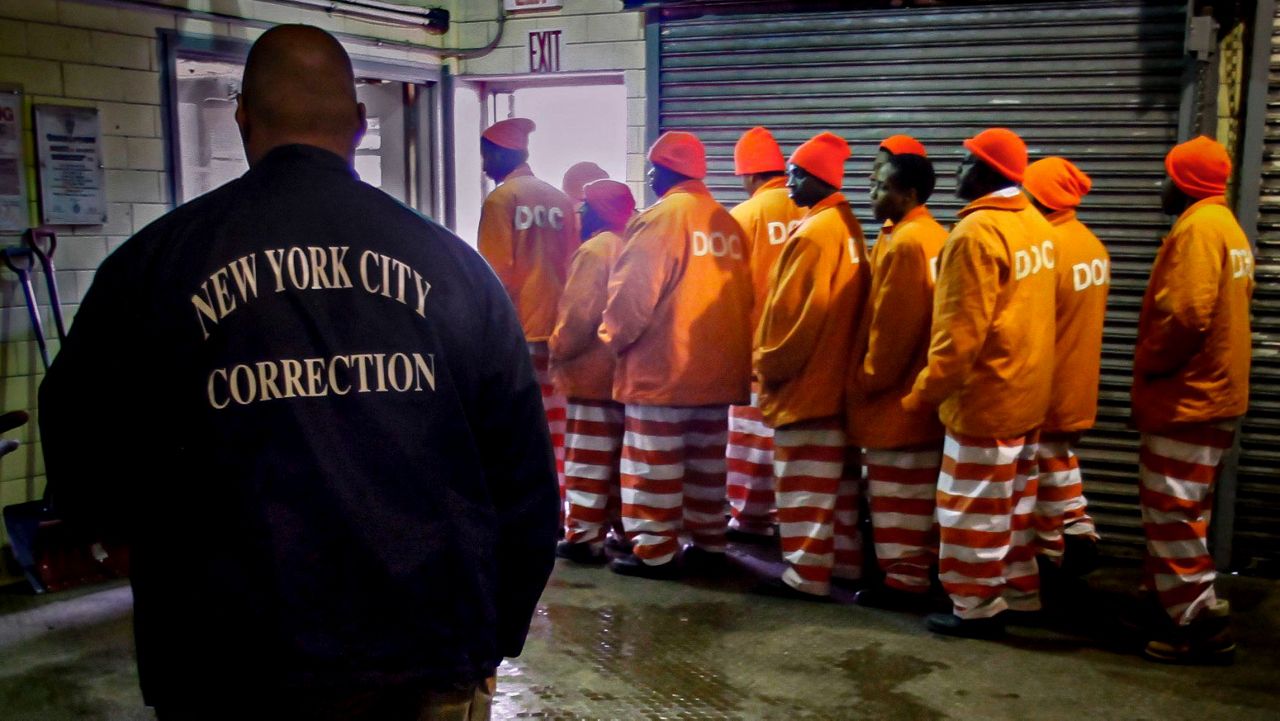 In this March 16, 2011 file photo, a corrections official watches inmates file out of a prison bakery after working the morning shift at the Rikers Island jail in New York. New York City’s notorious Rikers Island jail complex, troubled by years of neglect, has spiraled into turmoil during the coronavirus pandemic. (AP Photo/Bebeto Matthews, File)

Correction Commissioner Louis Molina has a huge task before him — coming up with a plan to fix Rikers Island.

"This is purely a management issue and the department has just been mismanaged for over a decade,” Molina said. “And I would tell you this, for me a receiver is not an option. Receivers and court orders don't solve hard problems. Leaders of organizations do that."

Molina said he is the leader to do it. On Friday, the commissioner and the city's federal monitor must file in federal court a final plan to turn around the jails on the island, which are at risk of a federal takeover. In an exclusive interview, Molina sat down with NY1 to make his case for keeping control of the jails and to preview the plan he will file later this week.

"I think it's a road map to sustainable reform,” Molina said. “You'll see us being able to really stabilize the department. And I think there will be measurements in the plan that I think everyone will agree with that we should be given the time that we need in order to turn the department around, which I wholly believe we can do."

He said with just five months on the job, the department is already starting to improve.

"We've seen a 40% decrease in our staff absenteeism from the height of last summer,” he said. “We've been able to transition five of our facilities from 12 hour tours to 8 hour tours. We've brought back contract providers into the department to provide services. We've brought in credible messengers and they were part of what's helping to lower the stabbings and slashings in the month of May."

In March, the jails had 66 stabbings and slashings. In May, there were 23.

Hundreds of correction officers have come back to work. For the first time in many months, the daily average number of uniformed staff calling out is below a thousand to 980.

That is still far above pre-pandemic levels. Changes to sick leave and addressing staff absenteeism is one issue the department must address in court.

But changes to the unlimited sick leave policy is not something Molina will support.

"Whether you are a member of the Department of Correction, the NYPD, the firefighters association, or sanitation those unlimited sick leave benefits really help and workforce mend or heal and then come back to do their jobs," Molina said. "It’s something negotiated in the collective bargaining agreement, so I don't expect that to change… I think what’s going to be changing for sure is our enforcement of the policy."

On top of the staffing crisis, the department is also in court for failing to provide medical care to detainees. It has a matter of weeks to get into compliance or face hefty fines.

Molina said his department will be in compliance with that court order by the deadline next week.

It is clear the challenges for Molina are immense. He said he needs a chance to try to turn it around.

"What we've asked the court and what I would ask of them is to give us an opportunity,” Molina said. “What we have done over the last five months has really moved the needle. We're not going to solve this systemic failures that existed over the last decade in mere months. But you are starting to see some real change in the department."