Adams chose Sewell after conducting a nationwide search to fill the role that is being vacated by outgoing NYPD Commissioner Dermot Shea.

At a press conference at the Queensbridge Houses Wednesday morning, the mayor-elect described Sewell as "calm, collected [and] confident," while lauding her "long and decorated career in law enforcement." 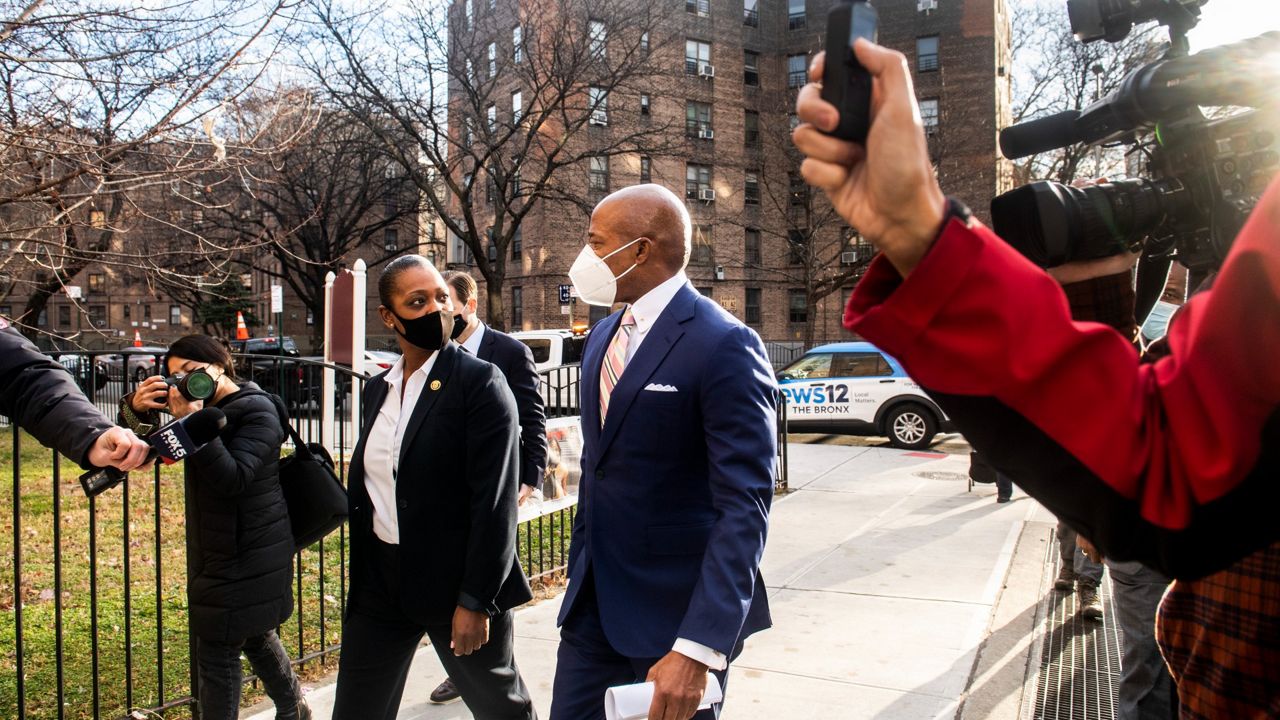 "She’s the woman for the job. I’m so proud of what she has accomplished and what she is going to accomplish," he said. "As commissioner, she will work with me day in and out to implement the vision I have laid out for the NYPD and the communities they serve."

Sewell, a native of New York City who lived in a Queensbridge Houses building as a child, has not served in the NYPD, unlike recent police commissioners. But she is a 25-year veteran of policing, and recently made history as the first Black woman to lead Nassau County’s detectives. She will be just the third Black police commissioner in New York City history.

After Adams introduced Sewell on Wednesday, she thanked him for making "a decision that gave women in policing across this country an opportunity, not a favor, but a chance to work with him." Adams, whose signature campaign issue was public safety, had promised to name a woman to lead America's largest police force.

Following news that he will select Keechant Sewell as the NYPD’s next commissioner, @ericadamsfornyc sent a message directly to the men and women of the dept this morning by email: “I know you will be as excited as I am about welcoming her to our ranks.”https://t.co/28p5xrNqi6

"It is truly an honor to be with you here today," Sewell said. "Your personal story and message motivates me as we endeavor to provide New Yorkers with the public safety they need and the justice they deserve."

"To all the little girls within the sound of my voice, there is nothing you can’t do, and no one you can’t become," she added. "In this city, in this moment, I have come full circle, and it is with a humble heart and clear eyes about the challenges ahead that I accept the position of New York City police commissioner."

After the announcement, Adams and Sewell visited the scene of a fatal shooting of a deli worker in Brooklyn.

Police say 20-year-old Fadhl Moosa suffered a gunshot wound to the head during an attempted robbery just after 7:30 p.m. Tuesday at the Flatbush Deli at 803 Flatbush Avenue. He was pronounced dead at the scene.

No arrests have been made, and no one is in custody.

After visiting the scene of that shooting, Adams and Sewell then walked along Flatbush Avenue.

“The commissioner and I, we are going to do walks. We're going to just come out and just walk through the community, stop in stores, talk to people, hear what their concerns are and be visible,” Adams said.

The NYPD has about 36,000 uniformed officers and 19,000 civilian workers, a much larger force than that of Nassau County. Sewell oversees a few thousand detectives in Nassau.

She will take over at a time when the city is seeing a sharp increase in shootings, and as the city seeks to bounce back from the COVID-19 pandemic.

In an interview with the New York Post that was published Tuesday evening, Sewell promised her first priority would be tackling violent crime in the city. She also defended the use of "broken windows policing" and the anti-crime unit, a controversial NYPD plainclothes unit. The anti-crime unit was supposed to go after violent crime and illegal guns, but was criticized for aggressive tactics and its involvement in a number of shootings. Adams wants to bring back the anti-crime unit as an "anti-gun unit."

Adams, a former police captain, said he was looking for more than just policing experience.

"It's not just academics. It's about emotional intelligence and compassion, and we're going to look at the best talent," Adams said earlier this year.

Shea congratulated Sewell on her appointment in a tweet on Wednesday.

"I know the people of NYC and all the brave men & women in blue are in good hands with her at the helm," he said.

A big congratulations to Keechant Sewell — NYC’s next Police Commissioner.

I want to wish her a warm welcome to the NYPD family. And I know the people of NYC and all the brave men & women in blue are in good hands with her at the helm. pic.twitter.com/5kjTB2jzdD

The mayor-elect was getting help from some seasoned veterans of the force in his search, including former police commissioner Bill Bratton and Phil Banks, a former NYPD chief who stepped down in 2014. Banks is the brother of incoming schools chancellor David Banks.

Sources close to Adams told NY1 earlier this month that Adams will create a deputy mayor for public safety, a new position that could create some tension with the new police commissioner. Phil Banks is seriously being considered for that post.

In a statement, Patrick Lynch, the president of the Police Benevolent Association union for uniformed officers, welcomed the city's next top cop.

"We welcome Chief Sewell to the second-toughest policing job in America. The toughest, of course, is being an NYPD cop on the street. New York City police officers have passed our breaking point. We need to fix that break in order to get our police department and our city back on course. We look forward to working with her to accomplish that goal."

In a statement, the Legal Aid Society said it looks forward to "turning the page with Mayor-elect Eric Adams and Keechant Sewell in hopes of making New York a more fair and just city," and called for significant reforms to the NYPD.

"The next Commissioner must demonstrate an understanding that many community problems do not warrant a law enforcement response; that police misconduct must be taken seriously and addressed swiftly; and that tackling some of our city’s most pressing public safety issues, especially gun violence, requires full funding for proven, community-based approaches, including the CURE Violence model, and not a knee-jerk resort to the failed, aggressive and racist approaches of the past. The Commissioner must also immediately meet with community members to build real and meaningful pathways to input and accountability," the Legal Aid Society said in the statement.