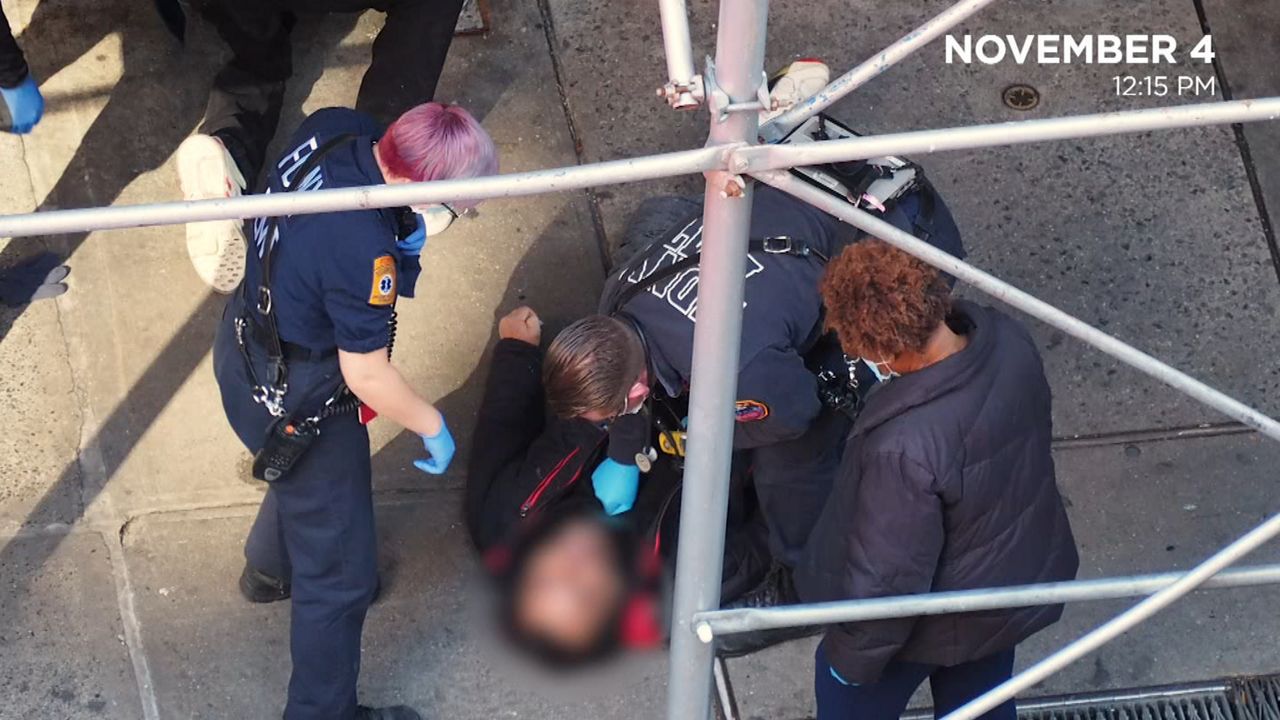 A November 4, 2020, image of a person passed out on a sidewalk outside a hotel for homeless people in Hell's Kitchen.

NEW YORK — Joe Restuccia has called Hell’s Kitchen home for more than 40 years. He lives there. His job is there. For work, he builds affordable housing there.

“The neighborhood has always been mixed,” he told NY1 this week. "It's got mixed incomes. By integrating everybody, you have a place that works. Remember the mayor said ‘A Tale of Two Cities.' Our neighborhood never was. It was everything in between.”

At the same time, Restuccia says the neighborhood has changed. He claims this area of Manhattan is now dangerous after dark. There is one block, in particular, he avoids.

"It really is ground zero,” Restuccia told NY1. "There are 812 homeless singles here in a one-block radius and it's not well managed. So people have nothing to do. They are kind of getting social services but not really. There is a lot of drug use and a lot of fights."

West 36th Street between 8th and 9th Avenues is where two hotels across the street from each other have been temporarily converted to homeless shelters so men can socially distance during the coronavirus pandemic.

“Everybody is helping each other out. Everybody is friends. There is no argument. There is no fight. There are no drugs on the block,” said one resident who has been staying there for about a month. "No fights. No arguments."

NY1 has obtained exclusive video that shows something else.

Just after midnight in mid-October, there appeared to be a large brawl in the middle of the street.

Two weeks later, we have tape of a man exposing himself on the street.

Days later, there was another incident: one man struggled with security in front of the hotel and was tased.

We obtained a photo of a man inside one of the hotel rooms holding a needle to his arm.

In October, Restuccia and his neighbors, like Delores Rubin, formed an alliance: the Hell’s Kitchen Neighborhood Coalition.

“Our entire community has recognized that there are issues we have to deal with,” Rubin told us.

They have called on the city to move at least one of the hotels to another area.

“There are people preying on our shelter residents because they are fragile right now,” Rubin said. "They have been traumatized by these moves. This block is so unstable in so many ways."

The conflict echoes another one farther uptown. This summer, residents of the Upper West Side threatened a lawsuit to get the city to move more than 200 homeless men from a hotel on 79th Street.

"Our role is to try to work something out,” Restuccia said. "We want to sit down with our city administration, our elected officials. We are all in this COVID thing together. We are all New Yorkers. This is not the way to do it. A suit is about being angry. We aren’t angry; we are frustrated and tired. And it's got to get better.”