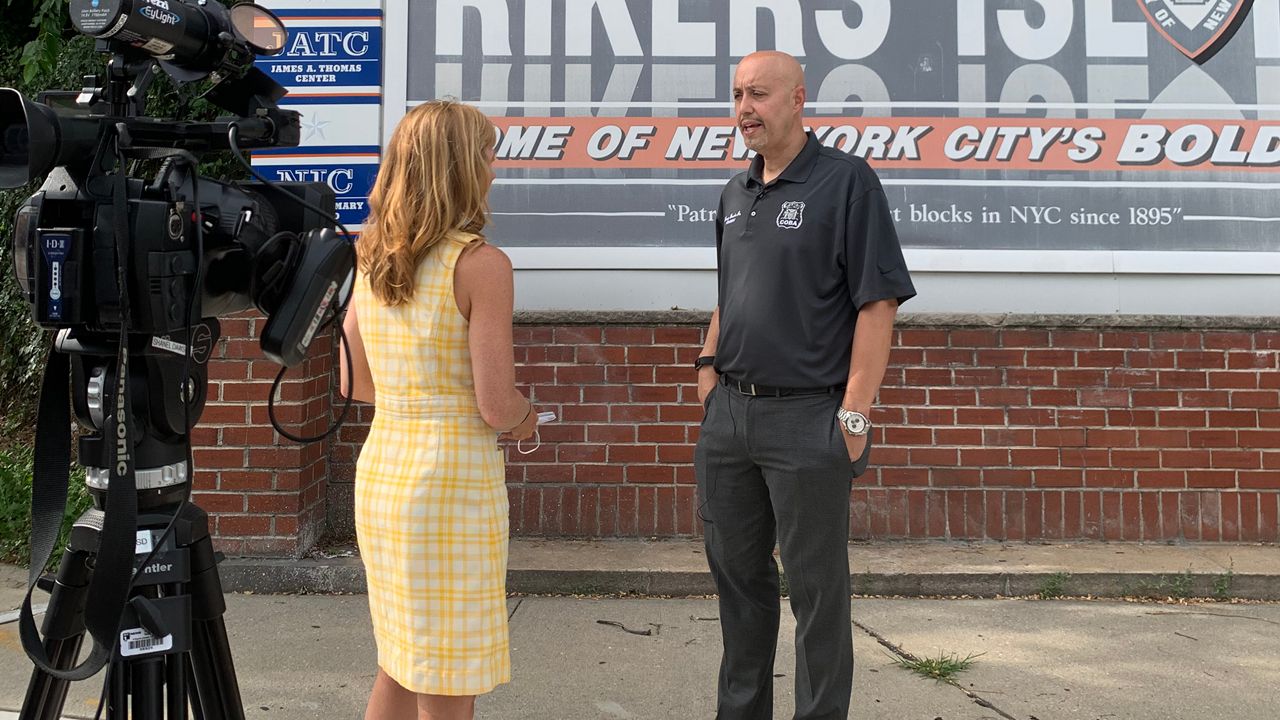 A white Department of Correction bus zoomed by Benny Boscio as he stood outside of Rikers Island. The driver saluted. Boscio waved.

“I think I am well known throughout the department,” Boscio told NY1. "I ran a strong campaign. People believed in me."

Boscio is the new leader of the Correction Officers’ Benevolent Association. He ousted his predecessor by more than 1,200 votes at the end of June.

It was a surprise victory, and a complete upheaval for the union. Of its 15 board members, 11 are new.

“I just feel like we didn’t have a strong enough voice with my predecessor,” Boscio told us during his first television interview in COBA headquarters in Queens. "I felt like our issues weren’t being addressed the way they should have been. We get a bad rap.”

That rap being that officers are aggressive or worse.

“This false narrative that’s out there that we are monsters,” Boscio said. “It’s really not true.”

Boscio has spent decades at the Department of Correction. He became a correction officer in 1999, and he has been involved with the union for years.

His predecessor, Elias Husamadeen, was an outspoken and constant thorn for the de Blasio administration. Boscio may deploy the same tactic.

“When you first start a relationship, everybody should get the benefit of the doubt. You should try to get your point across and have open communication. And if that doesn’t work and our relationship deteriorates, we’ll take it from there,” Boscio said.

What about his personal thoughts on the mayor?

“I am not really happy with a lot of the things the mayor has done when it comes to criminal justice and this crime wave that is happening in our city,” he said. "We are too lackadaisical on the people committing crimes in New York."

For years, the union blasted the de Blasio administration’s criminal justice reforms, including doing away with solitary confinement for inmates under 21 years old.

Two days after Boscio was elected, the mayor announced the city would move to end solitary confinement for everyone in city jails. He created a panel to figure out how to do it.

“I did not know the announcement was coming. I was basically left a message from the chairwoman of the Board of Correction, I think the day after I got elected,” he said. "I just became the president, and then ‘boom,' I am named based on a voicemail they left.”

“I am not in an agreement with it at all. We can’t end it. We have to have something in place,” he told NY1. "By no means can we do away with something like that. What do we do with these inmates? It’s open season on my members as it is."

That’s not the only reform Boscio is against. Take closing Rikers Island.

“It would be less costly to the taxpayer to renovate the jails on Rikers Island and fix them,” he said.

Rikers, he added, is best situated to handle the city’s alleged criminals.