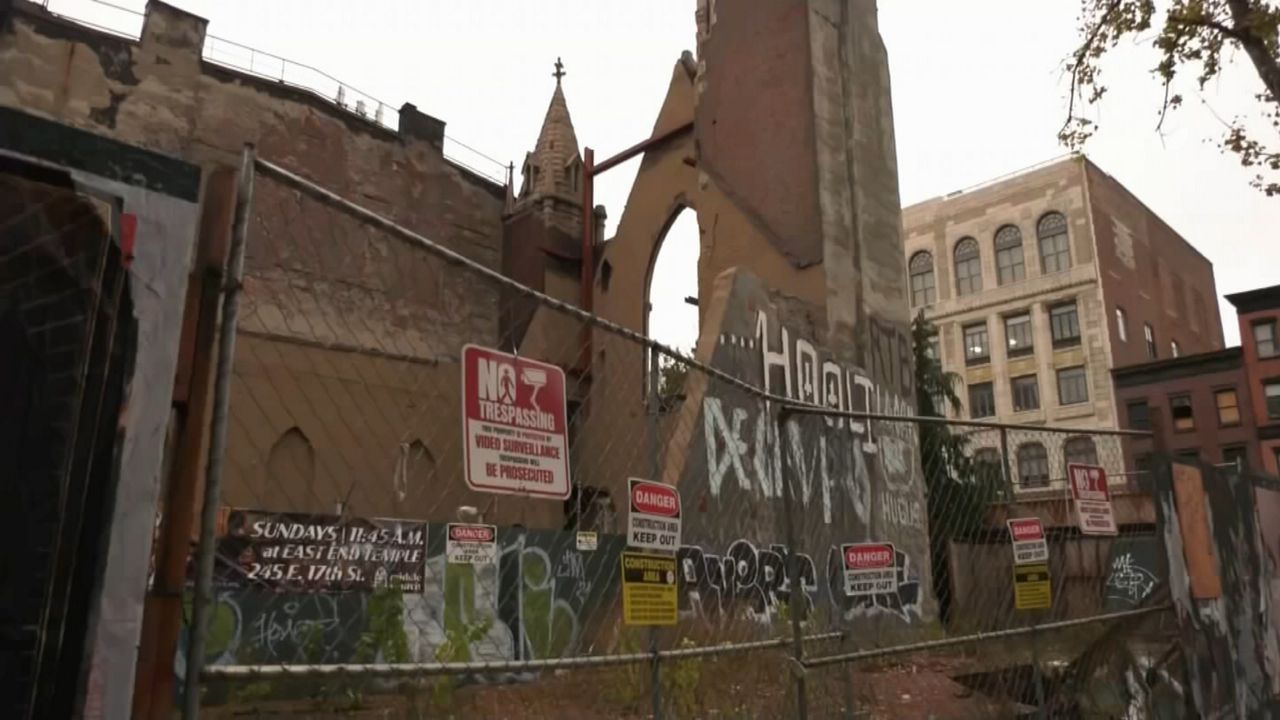 Elected officials, preservation groups, and local residents are calling on the city to stop developers from demolishing historic buildings.

The coalition alleges that more than a dozen buildings that were landmarked or being considered for landmark consideration have been demolished in the last year alone.

Buildings like 14 Gay Street in Greenwich Village and 186 Lenox Avenue in Harlem, where locals say the buildings were landmarked, but were unexpectedly torn down.

“The mayor says we need to get stuff built. Well how about the mayor figures out a way to keep stuff standing,” said Andrew Berman, executive director of the Village Preservation.

The group alleges that Mayor Eric Adams’ administration’s appetite for new development has made it easier for many historical sites to be demolished.

Buildings that are landmarked are protected by local law that requires owners to keep the property “in good repair.” The law is meant to protect against the demolition of landmarks by issuing violations.

But the advocates say that building owners are purposely letting their buildings decay and deteriorate, making them fertile ground for developing.

“It is a trend and we must be suspicious of this practice,” said James Singletary, director of Save Harlem Now! “How long are we going to stand by and allow this trend to continue to happen before it gets utterly out of control?”

Local officials and preservationists have called for the resignation of the head of the city’s Landmarks Preservation Commission, Sarah Carroll, citing the lack of oversight and responsibility in protecting historical sites.

The commission is made up of eleven members, all appointed by the mayor.

“So clearly the people in charge of enforcing the law in New York City are not doing their job and that has to come to an end,” added Berman at the press conference on Thursday.

Locals are hoping to save the bit of neighborhood history they have left and be able to work with the city to end the alarming trend.

“As I stand here, it’s an open lot, and it’s an open lot that I cry every day when I walk by it,” said Michael Williams in describing what it’s currently like to pass an empty lot at 441 Willoughby Avenue.

“We’re not going to stop until you understand that landmarks in Harlem, historical Harlem, will not be torn down,” said Erika Ewing of Mount Morris Park Community Improvement Association.

According to the commission, there are over 37,800 landmark properties in New York City, many of which are located within historical districts.

The city in a statement to NY1 said that the demolitions of the properties were an “unfortunate” situation that was necessary in order to protect public safety. At least one site, Dangler Mansion at 441 Willoughby Avenue, was demolished due to a clerical error that prevented the commission from becoming aware of a demolition application.

They went on to note that at some of the sites, the city has “worked to require property owners to salvage historic materials for reuse in reconstructing historic buildings.

“The Adams Administration is working to identify other landmarked properties around the City that could be at risk of suffering a similar fate, and working to intervene with additional supervision to prevent situations like this from happening in the future,” read the statement from Andrew Rudansky from the city’s Department of Buildings and Lisa Kersavage of the Landmarks Preservation Commission.