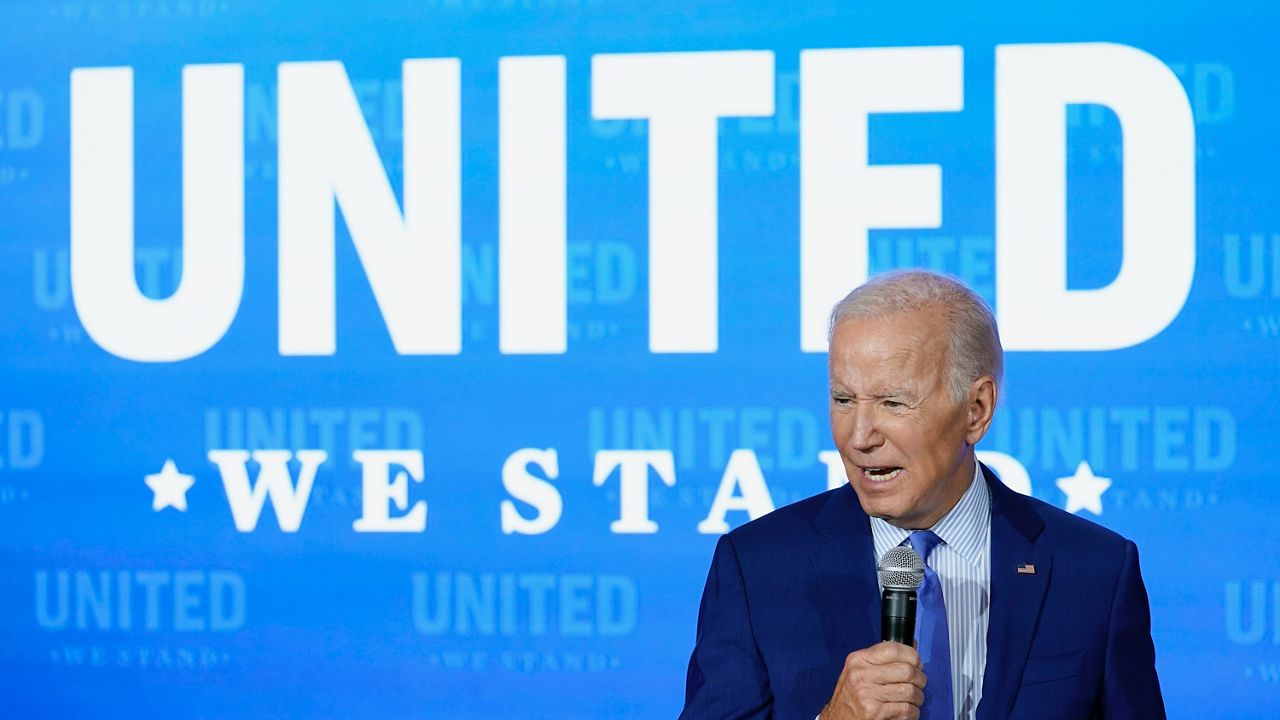 President Joe Biden speaks during the United We Stand Summit in the East Room of the White House in Washington, Thursday, Sept. 15, 2022. The summit is aimed at combating a spate of hate-fueled violence in the U.S., as he works to deliver on his campaign pledge to "heal the soul of the nation." (AP Photo/Susan Walsh)

'There's nothing beyond our capacity': Biden caps 'United We Stand' summit against hate-fueled violence

When President Joe Biden traveled to his first meeting of the G7 Summit in England in 2021, he told the leaders of the world's largest democracies that America was back. He was met with skepticism. "For how long?" he was asked. Their skepticism, he said, was born from a combination of the Jan. 6 attack on the U.S. Capitol, and of 2017's violence in Charlottesville.

"That's not America. That's not who we are," Biden said before an audience of attendees to the White House's "United We Stand" summit, a day-long series of conversations that brought together survivors of hate-filled violence, elected officials from all levels of government, activists, and tech companies, all to discuss and seek solutions to hate-fueled violence.

"Every other nation is based on ethnicity, geography. America is based on an idea — literally, not figuratively, an idea. We hold these truths to be self-evident; All women or men are created equal, endowed by their creator," Biden said. "We've never lived up to that. But we never before walked away from it ... that's why it's so important that we keep hollering."

Vice President Kamala Harris kicked off the summit, saying that the country is dealing with an "epidemic" of violence driven by hatred.

"America is again looking at and confronting the epidemic of hate fueled violence in Oak Creek, Orlando, Victoria, Pittsburgh, El Paso, Atlanta, Buffalo, and in so many other communities," she said. "We have seen our neighbors, our friends, our loved ones, attacked simply because of who they are or where they pray."

"Today, we must rededicate to joining together to help our communities prevent, respond and recover from acts of hateful violence," Harris pledged. "And our administration is committed to lead in this effort by investing resources in violence prevention programs to stop these horrific acts."

Harris briefly federal aid that the Biden administration has worked to provide for communities impacted by these incidents, but added that during the day's events, they will discuss that "federal support must be just one piece of a whole-of-society effort to address hate-fueled violence."

"I strongly believe no one should ever be made to fight alone. Not on this," Harris said. "We must stand together: Students, parents, educators, faith leaders, business leaders and law enforcement officials, and we must clearly say that a harm against any one of us is a harm against all of us."

"We are at an inflection point in our history, and indeed, in our democracy," she continued. "Years from now, our children and our grandchildren, they're going to ask us, 'What did you do at that moment?' 'What did you do to help protect our communities to fight hate-fueled violence and to build a better nation?' Well, I have confidence in what we're going to be able to say. We will tell them, 'We were all here together today.'"

The summit honored “Uniters” from across the country: survivors of hate-filled violence, former extremists, community leaders, civil rights activists, and people who have lost loved ones to hate crimes. Biden was led to the stage by Susan Bro, the mother of Heather Heyer, who was killed when a white supremacist drove his car into counterprotesters during the 2017 Charlottesville rally to "Unite the Right." That day, Bro said, she joined the club that no one wants to belong to — one of parents who lost children in violent, hatefilled acts.

"We're here to share our experiences and our strategies to combat hate. But it must continue beyond today," Bro said. "We must shine he light of truth, justice and equity on this issue, and reject those who wnt us to live in fear of our fellow man. For as long as hate thrives, more parents will be inducted into that club."

Bro was emblematic of one goal of the summit: to highlight the resilience of communities and individuals who are healing from hateful attacks, including mass shootings, and put forward a shared vision for a more united America.

Specifically, the summit sought to get to the root of hate crimes — crimes motivated by racism, white supremacy, or anti-gay bigotry. Crimes like the 2012 Sikh temple shooting in Oak Creek, Wisc., the 2022 grocery store Buffalo, N.Y., the 2019 Walmart shooting in El Paso, the 2021 shooting that killed six women of Asian descent in Atlanta, or the 2016 Pulse nightclub shooting in Orlando, where 49 people were killed and 53 more were wounded.

In a presentation alongside Cynthia Miller-Idriss, a professor at American University, Bill Braniff of the National Consortium for the Study of Terrorism and Responses to Terrorism noted that the United States has recently experienced several years where more than 70 terroristic attacks have taken place — more than the country has seen since the 1980s. More than 8,000 hate crimes — crimes motivated by a bias against race, ethnicity, religion, gender, sexual orientation, disability and other factors — are reported to FBI in 2020, Braniff said, the highest level in 12 years. And 90% of hate crime perpetrators are motivated by white supremac, male supremacy, or both. And anti-semetic hate crimes are at an all-time high as well, he said.

As part of the summit, President Biden announced a package of actions intended to address “hate-filled violence and advance national unity,” featuring more than a half-dozen bipartisan efforts by government, community and technological leaders.

The first effort, Biden said, is the White House Initiative on Hate-Motivated Violence, which includes bolstering training on reporting and combatting hate-fueled violence and bullying for local law enforcement, schools, workplaces and houses of worship. The federal government also will increase access to federal prevention resources, and the Department of Homeland Security will award $20 million in grants for state, local, tribal, and territorial governments, nonprofits, and colleges and universities to establish or enhance capabilities to prevent targeted violence.

Biden also stepped onto the bully pulpit, calling upon Congress to impose strong transparency requirements for all social media platforms, to boost the AmeriCorps living allowance to the equivalent of $15 an hour, and to build upon the foundation of the Safer Communities Act.

He also called out, once again, for a ban on assault weapons. "We did it once before, and when we did, mass crime plummeted," Biden said.

In sum, the federal government hopes to do for its relationships with state and local governments as it seeks all Americans to do — to join closer, to work together, to stop the spread of violence driven by hatred.

The event also featured the launch of Dignity.us, an initiative supported by the foundations of Presidents Obama, George W. Bush, Clinton and Ford, that seeks to foster dialogue and connections across the U.S. and identify solutions to hate-fueled violence.

The White House announced the summit last month with the stated goal of bringing together Democrats, Republicans and leaders from all levels of government.

“As President Biden said in Buffalo after the horrific mass shooting earlier this year, in the battle for the soul of our nation 'we must all enlist in this great cause of America,'” White House Press Secretary Karine Jean-Pierre said in August. ”The United We Stand Summit will present an important opportunity for Americans of all races, religions, regions, political affiliations, and walks of life to take up that cause together."

Senior White House officials sought to separate the event and its goals from the comments Biden made earlier this month, when he forcefully denounced the “MAGA Republican” extremist followers of former President Donald Trump.

At his Sept. 1 speech in front of Philadelphia’s Independence Hall, Biden said that Trump’s hard-line supporters “are determined to take this country backwards … to an America where there is no right to choose, no right to privacy, no right to contraception, no right to marry who you love.”

“We’re talking about hate-fueled violence, attacking people because of who they are, what they look like, what their religious beliefs are, who they love,” a senior administration official said. ”This is something that all Americans, Republican and Democrat, should be able to agree on.”

America, Biden said, continues to be in a "battle for the soul of our nation," a phrase he's used often over the past few years.

"When I look around at all of you here today, I know we'll win that battle. I know when the power is within each of us to transform the story of our time, to rise together against hate to show who we are. We are the United States of America. And there's nothing — nothing! — beyond our capacity."