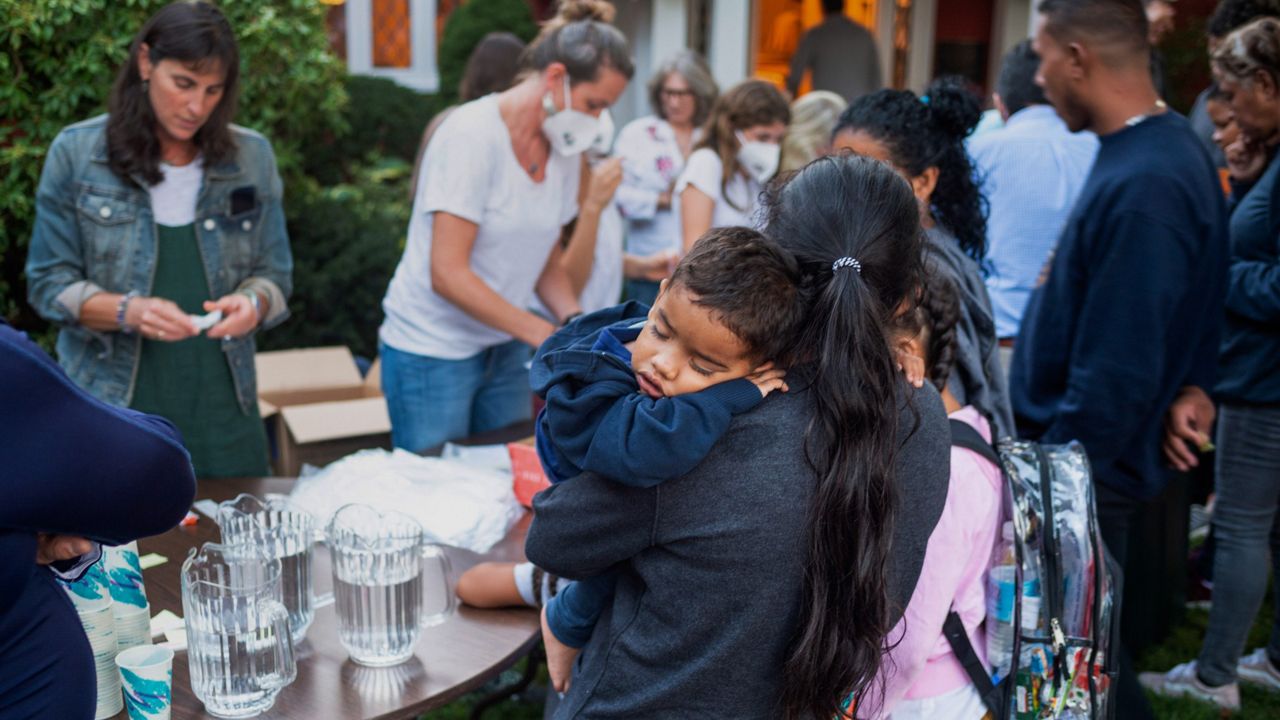 A woman, who is part of a group of immigrants that had just arrived, holds a child as they are fed outside St. Andrews Episcopal Church on Wednesday in Edgartown, Mass., on Martha's Vineyard. (Ray Ewing/Vineyard Gazette via AP)

The Republican governors of Florida and Texas transported scores of migrants Wednesday and Thursday morning to Martha’s Vineyard and near the Washington residence of Vice President Kamala Harris, escalating a tactic to draw attention to what they consider to be the Biden administration's failed border policies.


According to Gov. Ron DeSantis' office, Florida paid for two flights of “illegal immigrants” to be flown to Martha’s Vineyard in Massachusetts, where former President Barack Obama owns a mansion.

The flights were part of a $12 million program approved by the Florida Legislature to “facilitate the transport of illegal immigrants from this state consistent with federal law,” a statement from communications director Taryn Fenske said.

Hours after the planes landed at Martha’s Vineyard, two buses carrying migrants coming from the border city of Eagle Pass, Texas, arrived near Harris’ residence at the Naval Observatory in Washington.

Two people on those buses who spoke to Spectrum News said they came all the way from Venezuela, trekking through the jungle for several days before crossing over into Panama and the rest of Central America and ultimately passing over the Rio Grande at the U.S.-Mexico border to enter the United States.

Migrants from the Texas border were dropped at the Naval Observatory this morning. Migrants we spoke to told us they are from Venezuela seeking asylum, and that while they knew they were coming to Washington DC, they didn’t know where they were being dropped off. @SpectrumNewsDC pic.twitter.com/9Q2jn173la

They said they knew they were coming to Washington but not where they'd be dropped off.

Deilinyer Mendoza, a 25-year-old who arrived with his wife, said he crossed the river because the rest of the border was closed.

Mendoza also credited President Joe Biden for letting him inside the country. "Thank god he opened the doors for us in this moment, and thank god we could enter," he said.

Both Mendoza and another young woman said they were on their way to New York, where they have family or friends.

A few migrants are left here at the US Naval Observatory and they’re being taken to a local church in DC. A couple of migrants we spoke to traveled from Venezuela and plan to go to NYC where they have family. pic.twitter.com/EPLAwTekCV

Texas Gov. Greg Abbott ordered the buses, carrying over 100 people, to be driven to Washington, he confirmed on Twitter. The migrants originally came from Venezuela, Uruguay, Colombia and Mexico, according to Fox News.

Abbott has previously sent similar buses to Washington, New York, Chicago, arguing that his state is overwhelmed by migrants at the border and that other areas of the country should shoulder some of the burden. He blames Biden’s border policies.

Tatiana Laborde, managing director of SAMU First Response, told Spectrum News that her and other aid groups had been in regular contact with border officials but they had no warning about Thursday's drop-off.

She said migrants were confused when they were left at the VP's residence, and some got lost. Many don't speak English or have money to get around.

"They don't understand that this is a political situation. And they're just grateful to be closer to wherever the final location is," she said.

Volunteers told Spectrum News the migrants were being taken to a local church.

White House press secretary Karine Jean-Pierre said that because neither federal and local officials or aid groups were notified about "a plan to leave migrants, including children, on the side of a busy D.C. street makes clear that this is just a cruel, premeditated political stunt."

Florida's statement on the Mssachusetts flights did not specify the immigrants’ country of origin, how many were aboard the two flights or any other identifying information about the individuals, other than to say that they were “illegal” and adding that many migrants who cross the border illegally from Mexico are temporarily shielded from deportation after being freed by U.S. authorities to pursue asylum in immigration court — as allowed under U.S law and international treaty — or released on humanitarian parole.

Massachusetts’ Gov. Charlie Baker, a Republican, said he was in touch with local officials and that short-term shelter was being provided.

“Some were told that they were going to New York,” Fernandes said. “They were told that when they got here, they'd be met by people to give them jobs and a place to live.”

Fernandes said the migrants had to walk several miles to alert people they needed help.

“Think about the governor of Florida, one of the largest states in the nation, spending his time hatching a secret plot to ship up 50 immigrants here, families, children as young as 4 and use them as political pawns just so he could get on Tucker Carlson and beat his chest about how he's tough on immigration,” Fernandes said. “He is a coward. And the real story here is about the island community that has rallied to come together to support these people.”

Fernandes tweeted: “Our island jumped into action putting together 50 beds, giving everyone a good meal, providing a play area for the children, making sure people have the healthcare and support they need. We are a community that comes together to support immigrants.”

Arizona Gov. Doug Ducey also has been busing migrants to Washington since May. Passengers must sign waivers that the free trips are voluntary.

Both Abbott and DeSantis are up for reelection this year. Ducey is nearing his term limit.

In a letter to Attorney General Merrick Garland, California Gov. Gavin Newsom called for the Justice Department to immediately investigate.

"What @GovRonDeSantis and @GregAbbott_TX are doing isn’t clever, it’s cruel," he wrote in a Twitter post. "I’m formally requesting the DOJ begin an immediate investigation into these inhumane efforts to use kids as political pawns."

What @GovRonDeSantis and @GregAbbott_TX are doing isn’t clever, it’s cruel.

I’m formally requesting the DOJ begin an immediate investigation into these inhumane efforts to use kids as political pawns. pic.twitter.com/x2sBa06nSw

The move by Abbott comes four days after Harris told NBC’s “Meet the Press” that the southern border is “secure.”

“We have a secure border in that that is a priority for any nation, including ours and our administration,” she said. “But there are still a lot of problems that we are trying to fix given the deterioration that happened over the last four years.”

Abbott wrote in a tweet: "VP Harris claims our border is 'secure' & denies the crisis. We’re sending migrants to her backyard to call on the Biden Administration to do its job & secure the border."