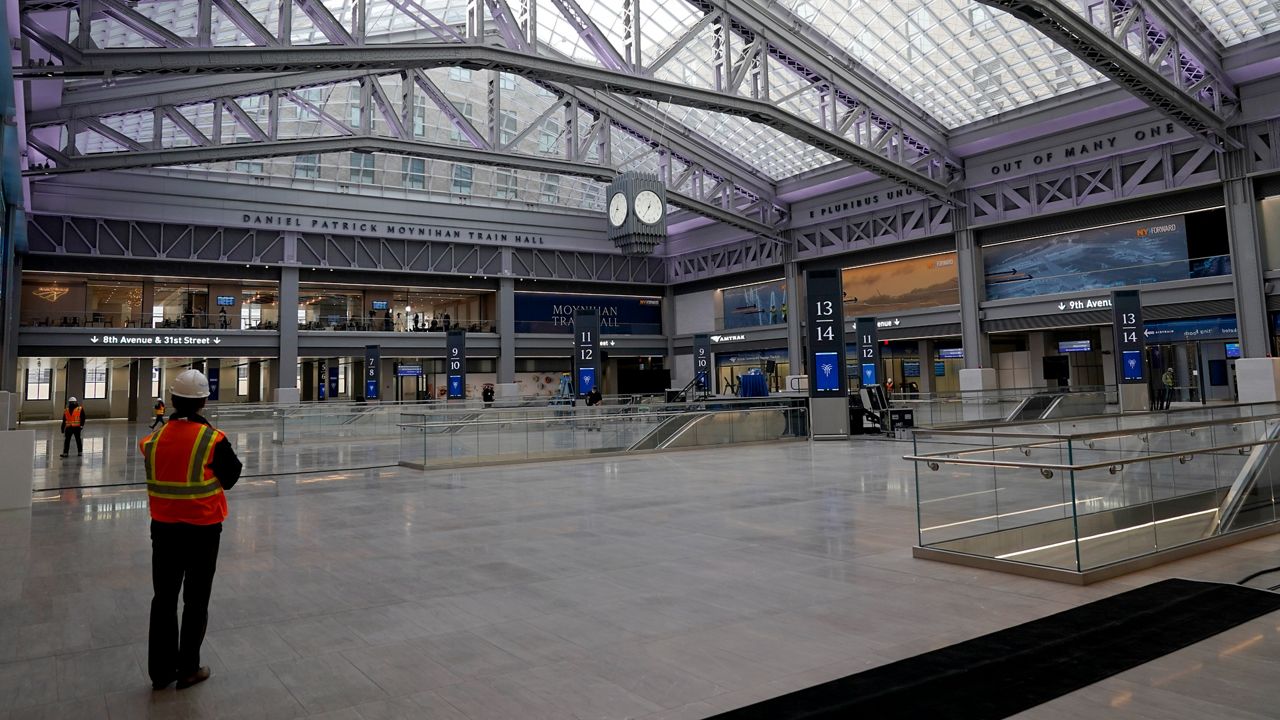 The Moynihan Train Hall is seen during a media preview in New York on Wednesday, Dec. 30, 2020. (AP Photo/Seth Wenig)

While there are still many more steps in the process before final approval, the project is now on track.

Hochul is pushing an ambitious and expensive plan to not only update Penn Station, but also redevelop the area around it.

It is not a new idea, but until now, it’s had trouble getting off the ground.

“What we are looking at now is a project that will need to be filled with space for many years into the future,” Hochul said. “And I’m going to continue betting on New York. I’m betting on the comeback, as are the developers. No one is going into this to lose money or have this be a failure. We know this will be wildly successful. But it takes vision to see that end game at the end of the road.”

Asked about the scheduled PACB vote, @GovKathyHochul says this is just one step in the process to move it forward. Says there are scant details on total cost because they are “still negotiating,” but should be around $7 Billion. Adds now is the time to “take a chance on New York” https://t.co/S0b8rOfXoK pic.twitter.com/pciHAmoegC

A big criticism of the project is that it relies on the private sector to build new office towers that will provide much of the financing.

Underscoring how nebulous the funding scheme is, the agenda item on Penn Station before the PACB vote shows that the dollar amount is N/A, which is unusual.

“We are making changes so that we can conceptually get this through. And there are numbers out there, but we are still in negotiations. They have been fully briefed. The elected officials have been fully briefed. The community has been briefed. But again, it’s an ongoing process. This is not the final say. We have to continue the process going forward though, because this is going to take many years to accomplish,” Hochul said.

2/2 Of the legislators who sit on the board, @AmyPaulin says she has recused herself and a stand-in will be voting in her stead, representing the office of @NYSA_Majority and @CarlHeastie

Technically, the PACB only approved the memorandum of understanding between the city and the state and not the full scope of the project. But it was approved over the objections of Thomas DiNapoli, the New York State Comptroller, who sent a letter to the Hochul administration ahead of time.

"The Penn Station project has laudable goals but given the complexity and financial risks of the project the Public Authorities Control Board should take additional time to determine that sufficient information and funding commitments are in place," the letter read.

The Economic State Development Corporation released some figures this week showing that the Penn Station redevelopment will cost an estimated $7 billion. But when other aspects of the plan are added, including transportation upgrades, that balloons to $22 billion.