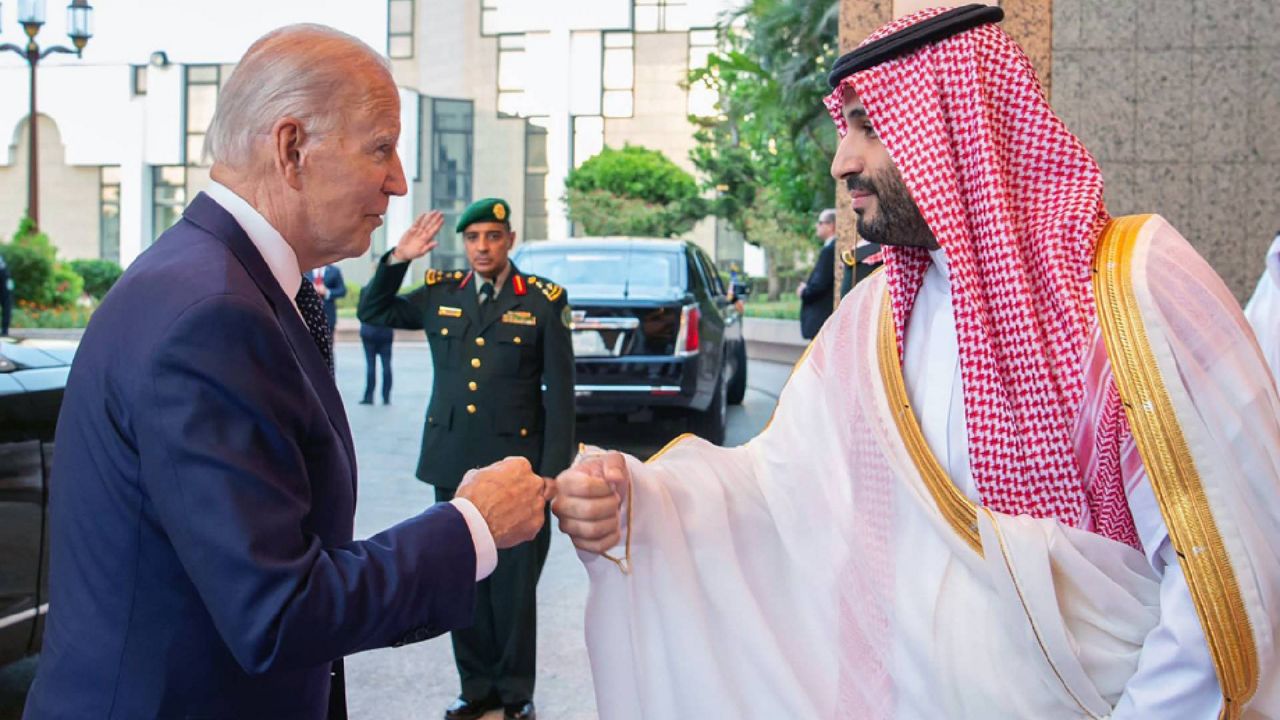 A crucial meeting to repair one of the world's most important diplomatic relationships began with a fist bump Friday as Saudi Crown Prince Mohammed bin Salman welcomed U.S. President Joe Biden at a royal palace.

The first encounter, captured by Saudi television, occurred as Biden stepped out of his presidential limousine in Jeddah for a visit that is intended to reset their countries' longstanding partnership.

There was little evidence of any warmth between the leaders, and none of the backslapping or smiles that Biden or the crown prince usually display when greeting other leaders.

Until now, Biden had refused to speak to Prince Mohammed, the presumed heir to the throne currently held by his father, King Salman. Biden has harshly criticized the oil-rich kingdom for its human rights abuses, particularly the murder of Jamal Khashoggi.

Biden had previously declined to say whether he would raise the 2018 killing of Khashoggi, a U.S.-based journalist and critic of the kingdom, but his widow told Spectrum News in an interview that White House officials told her that the president would mention her late husband's name.

Last year his administration approved the release of a U.S. intelligence finding that determined the crown prince, known as MBS, likely approved Khashoggi’s killing. The release of the report caused a further rupture in U.S.-Saudi relations.

In a brief press conference following his closed-door conference with the prince, Biden confirmed he had spoken about Khashoggi's death "at the top of the meeting, making it clear what I thought of it at the time and what I think of it now."

"I was straightforward and direct in discussing it. I made my view crystal clear. I said very straightforwardly, for an American president to be silent on an issue of human rights is inconsistent with who we are and who I am," the president said. "I will always stand up for our values."

"I went on to talk more about how that dealing with any opposition to the criticism of the Saudi administration, in other countries was viewed as to be a violation of human rights," Biden continued, noting that the two "discussed human rights, the need for political reform."

When pressed, Biden said he told the crown prince: "If anything occurs like that, again, they'll get that response and much more."

Still, those concerns have been eclipsed by other challenges, including rising gas prices and Iranian aggression in the Middle East. At the same time, Saudi Arabia is looking to bolster its security relationship with the United States and seeking investments to transform its economy into one that’s less reliant on pumping oil.

Biden on Friday said Saudi Arabia will "partner with us on a far-reaching clean energy initiative focused on green hydrogen, solar, carbon capture, nuclear and other projects to accelerate the world's clean energy transition, and to help the U.S. clean energy industry set global standards," adding that the two countries had "a good discussion on ensuring global energy security and adequate oil supplies to support global economic growth."

The Saudis held a subdued welcome for Biden at the airport in Jeddah, with none of the ceremony that accompanied his stop this week in Israel.

Biden was greeted by Mecca’s governor, Prince Khalid bin Faisal, and Saudi Arabia’s ambassador to the U.S., Princess Reema bint Bandar, and then walked down a lavender carpet that led to the limousine that whisked him to the palace.

The president was scheduled to sit down with King Salman, the 86-year-old monarch who has suffered from poor health, including two hospitalizations this year. Then he was to participate in a broader meeting including Prince Mohammed, the presumed heir to the throne who is known by his initials MBS.

The future of the region, including the possibility of closer ties between Saudi Arabia and Israel, as well as the ebb and flow of the world’s oil supply hang in the balance.

The visit may already be seen as a win for the crown prince, who is known by his initials MBS. His rise to power has ushered in a new era for the kingdom as it works to build a homegrown military and weapons industry, wean itself from reliance on oil for revenue and build ties with Israel and other nations as a hedge against the perception that the U.S. is a less reliable security partner.

There’s been considerable speculation about both the choreography and the substance of how Biden, who had vowed as a presidential candidate to treat the Saudis as a “pariah” for their human rights record, would go about interacting with the crown prince.

Biden was expected to sit down first with King Salman before participating in a larger meeting that would include Prince Mohammed and other senior Saudi officials, as well as the president’s top advisers.

Asked if Biden would shake hands with MBS, a senior administration official demurred and noted the White House is “focused on the meetings, not the greetings.”

Biden arrived in the Red Sea port city of Jeddah on the third day of a four-day swing through the Middle East. He spent the first two days meeting with Israeli officials and traveled to the West Bank on Friday to meet with Palestinian Authority President Mahmoud Abbas and others before flying to Saudi Arabia.

The Saudis took a step toward normalization of relations with Israel before Biden’s visit, announcing early Friday that it was opening its airspace to “all air carriers,” signaling the end of its strict limits on Israeli flights flying over its territory.

Biden hailed the decision as “an important step towards building a more integrated and stable Middle East region,” adding that the decision “can help build momentum toward Israel’s further integration into the region, including with Saudi Arabia.”

Biden also will take part in a Saturday gathering of leaders from the Gulf Cooperation Council —Bahrain, Kuwait, Oman, Qatar, Saudi Arabia and the United Arab Emirates — before returning to Washington. The leaders of Mideast neighbors Egypt, Iraq and Jordan are also to attend.

The Saudi visit is one of the most delicate that Biden has faced on the international stage. Any kind of respectful greeting that Biden can manage, and the Saudi crown prince can reflect back, might help both sides soothe relations.

But it could also open Biden to deeper criticism that he is backtracking on his pledges to put human rights at the center of foreign policy.

Khashoggi’s fiancee, Hatice Cengiz, said that, with the visit to Saudi Arabia, Biden was backing down on human rights.

“It’s a very huge backing down actually,” Cengiz told The Associated Press in an interview Thursday. “It’s heartbreaking and disappointing. And Biden will lose his moral authority by putting oil and expediency over principles and values.”

Biden’s criticism of the Saudis as a candidate became more tempered in recent months as Russia’s war on Ukraine aggravated what was already a global supply crunch for oil and gas. Elevated gasoline prices have driven inflation in the United States to its highest levels in four decades.

Saudi political analyst Turki al Hamad said he was not optimistic about the prospects for Biden’s trip.

“Biden and his team will come and set their eyes on the U.S. elections, and improving the Democrats’ situation by coming out with an agreement on increasing oil production,” Hamad tweeted, saying that “does not matter to the Saudi leadership.”

Aaron David Miller, a senior fellow at the Carnegie Endowment for International Peace and former U.S. State Department official, said Biden is looking forward to visiting Saudi Arabia “like I would look forward to a root canal operation.”

Miller contrasted Biden with his predecessor, President Donald Trump, who visited Saudi Arabia on his first foreign trip. That trip was highlighted by a mystifying photo op of the leaders gathered around a glowing orb and Trump briefly joining a ceremonial sword dance.

With Biden and Prince Mohammed, “there aren’t going to be a lot of sword dances, or smiling photo ops, or warm embraces,” Miller said.