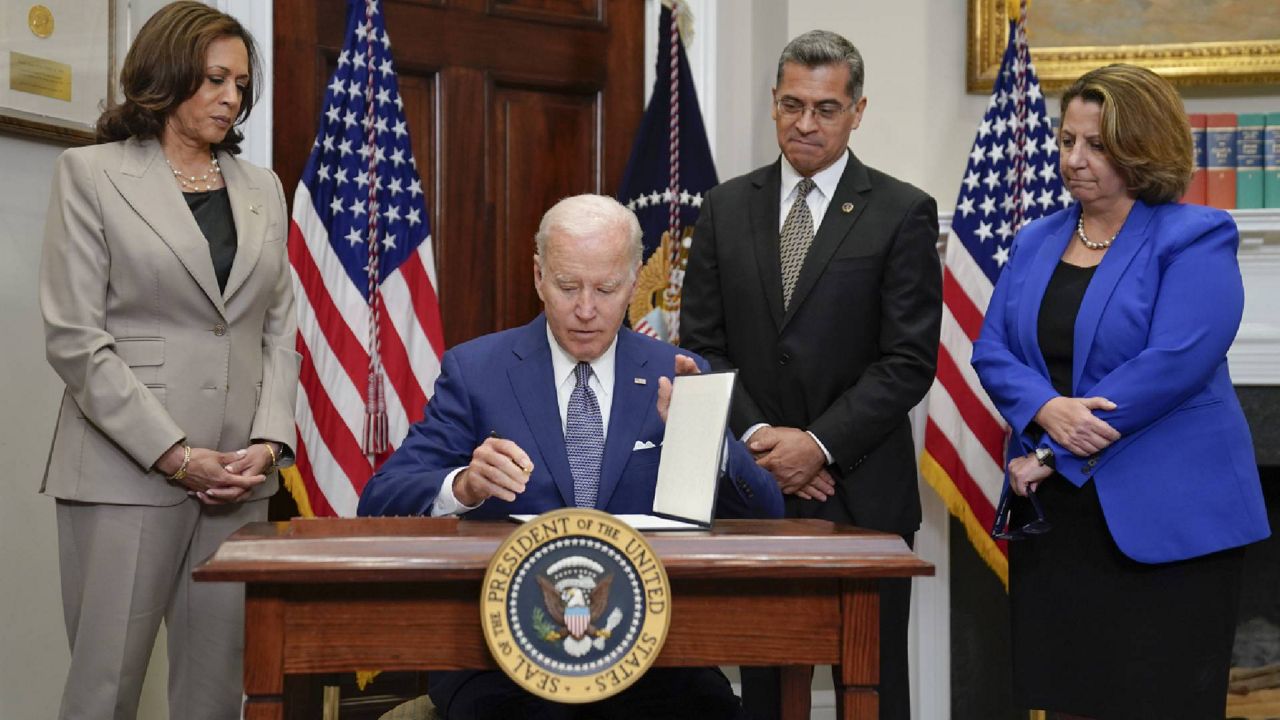 President Joe Biden took executive action Friday to protect access to abortion as he faces mounting pressure from fellow Democrats to be more forceful on the subject after the Supreme Court overturned Roe v. Wade two weeks ago.

Biden spoke Friday morning at the White House, calling the Supreme Court "out of control" and urging Americans to use their vote to prevent "extremist elements of the Republican Party" from taking away "freedoms and our personal autonomy."

"The choice we face as a nation is between the mainstream and the extreme. Between moving forward and moving backwards. Between allowing politicians to enter the most personal parts of our lives and protecting the right to privacy," Biden said with Vice President Kamala Harris, Health and Human Services Secretary Xavier Becerra and Deputy Attorney General Lisa Monaco behind him.

The executive order is intended to mitigate some potential penalties women seeking abortion may face after the ruling but is limited in its ability to safeguard access to abortion nationwide.

Biden formalized instructions to the Departments of Justice and Health and Human Services to push back on efforts to limit the ability of women to access federally approved abortion medication or to travel across state lines to access clinical abortion services.

The president on Friday emphasized that the impact of the Supreme Court's decision is not an "imagined horror" but that it is "already happening," telling the story of a 10-year-old rape victim who was forced to leave Ohio to receive an abortion, according to reporting by the Indianapolis Star.

He warned that if Republicans win the majority in Congress and eventually the presidency, they could seek to pass a nationwide ban on abortion.

"The challenge is, go out and vote. For God's sake, there's an election in November. Vote, vote, vote, vote," Biden said. "Consider the challenge accepted, court. But in the meantime, I'm signing this important executive order."

Biden's order also directs agencies to work to educate medical providers and insurers about how and when they are required to share privileged patient information with authorities — an effort to protect women who seek or utilize abortion services. He will also ask the Federal Trade Commission to take steps to protect the privacy of those seeking information about reproductive care online and establish an interagency task force to coordinate federal efforts to safeguard access to abortion.

"The Biden administration wants to emphasize that there are things to do to protect against the use of fertility apps, things that could sort of give prosecutors indications about people who might be pregnant,” said Sonia Suter, an expert in health law at George Washington University.

She said women may fear “health care providers who think they're required to report that information in states that ban abortions,” but “if there is no state law requiring the reporting, then HIPAA doesn't even allow it.”

And the order will also affirm patients' and doctors' rights under the Emergency Medical Treatment and Labor Act (EMTALA), so that pregnant women and providers are protected in situations requiring emergency medical care, such as a miscarriage or ectopic pregancy.

"That could offer some protections in very serious situations where a state might have a life exception and doctors think, 'I can't treat this patient until she's in really, really terrible condition,'" Suter said. "And EMTALA would allow the patient to get the care they need sooner. So I think that's really important. That could save lives."

The White House said it will also convene volunteer lawyers to provide women and providers with pro bono legal assistance to help them navigate new state restrictions after the Supreme Court ruling.

The order, after the high court's June 24 ruling that ended the nationwide right to abortion and left it to states to determine whether or how to allow the procedure, comes as Biden has faced criticism from some in his own party for not acting with more urgency to protect women's access to abortion. The decision in the case known as Dobbs v. Jackson Women's Health Organization overturned the court's landmark 1973 Roe v. Wade ruling.

Since the decision, Biden has stressed that his ability to protect abortion rights by executive action is limited without congressional action.

"Ultimately, Congress is going to have to act to codify Roe into federal law," Biden said last week during a virtual meeting with Democratic governors.

The tasking to the Justice Department and HHS is expected to push the agencies to fight in court to protect women, but it conveys no guarantees that the judicial system will take their side against potential prosecution by states that have moved to outlaw abortion.

"President Biden has made clear that the only way to secure a woman's right to choose is for Congress to restore the protections of Roe as federal law," the White House said. "Until then, he has committed to doing everything in his power to defend reproductive rights and protect access to safe and legal abortion."