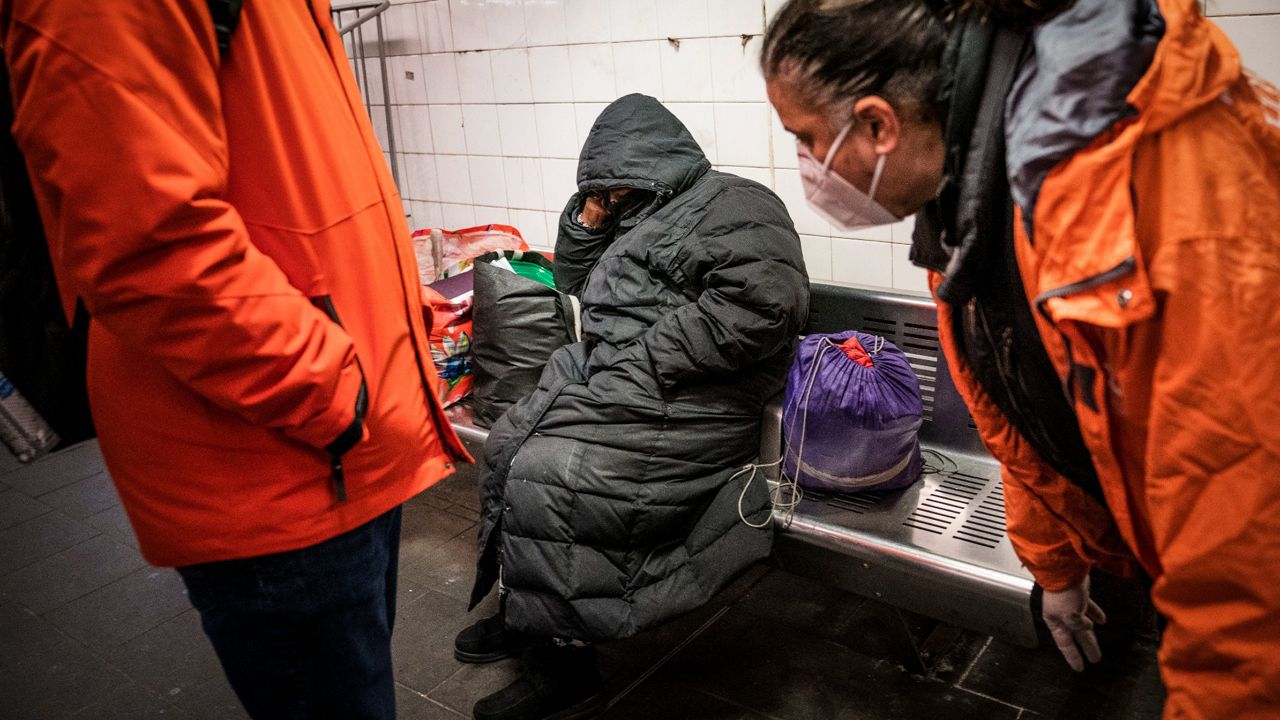 FILE - Workers with Homeless Outreach interact with a person sleeping on a bench in the Manhattan subway system, Monday, Feb. 21, 2022, in New York. New York City removed 455 people from trains and stations and police arrested 143 people in the city's subways in the first week of a crackdown on crime and the presence of homeless people in the transit system. (AP Photo/John Minchillo, File)

“I am just folding all my stuff over again,” she said, peering out of her blue tent.

They have been homeless for about a year, shuffling around the city, sleeping in a park and on the subway.

They use fentanyl and other drugs. And, mostly, they say they have seen little help from the city.

“Safe haven, they offered us something, but when we got there, they’re like, ‘No, it’s not happening,” she said. “I’d rather be on the street any day before the shelter.”

That’s not an unusual sentiment.

“We as a city want to make sure we are reaching those individuals, understanding their circumstances, again gaining their trust to bring them inside,” Department of Social Services Commissioner Gary Jenkins said.

Every year, the city sends volunteers into the streets in the middle of the night to count the number of homeless people — an annual survey known as the HOPE count.

The 2022 survey results obtained exclusively by NY1 found 3,439 people were sleeping on the streets or subways in Jan. That number is a return to pre-pandemic levels.

The figure in 2021 was sharply lower — by about a thousand. The city’s social services commissioner attributes the lower number last year to the subway shutdown.

“The New York City subway system closed down between 1 a.m. and 5 a.m. That provided an opportunity for us to really engage individuals,” Jenkins said. “That was an off year because of the situation of the pandemic.”

These numbers predate the Adams administration’s efforts to get rid of homeless encampments on the streets or on the subway.

Numbers provided to NY1 show the city has cleaned up almost 1,093 encampments on the street between mid-March and the end of May. During that time period just 58 people from an encampment accepted placement into a shelter.

“I go against only 58,” Jenkins said. “If you bring one person in, that’s one person’s life you are affecting.”

Rodriguez and her partner will not be heading to the shelter soon. She says they want permanent housing.

“I’m not asking for a beautiful luxury apartment, we’re really not,” she said. “Just give us a space and from that point we’ll just keep building up and building up.”