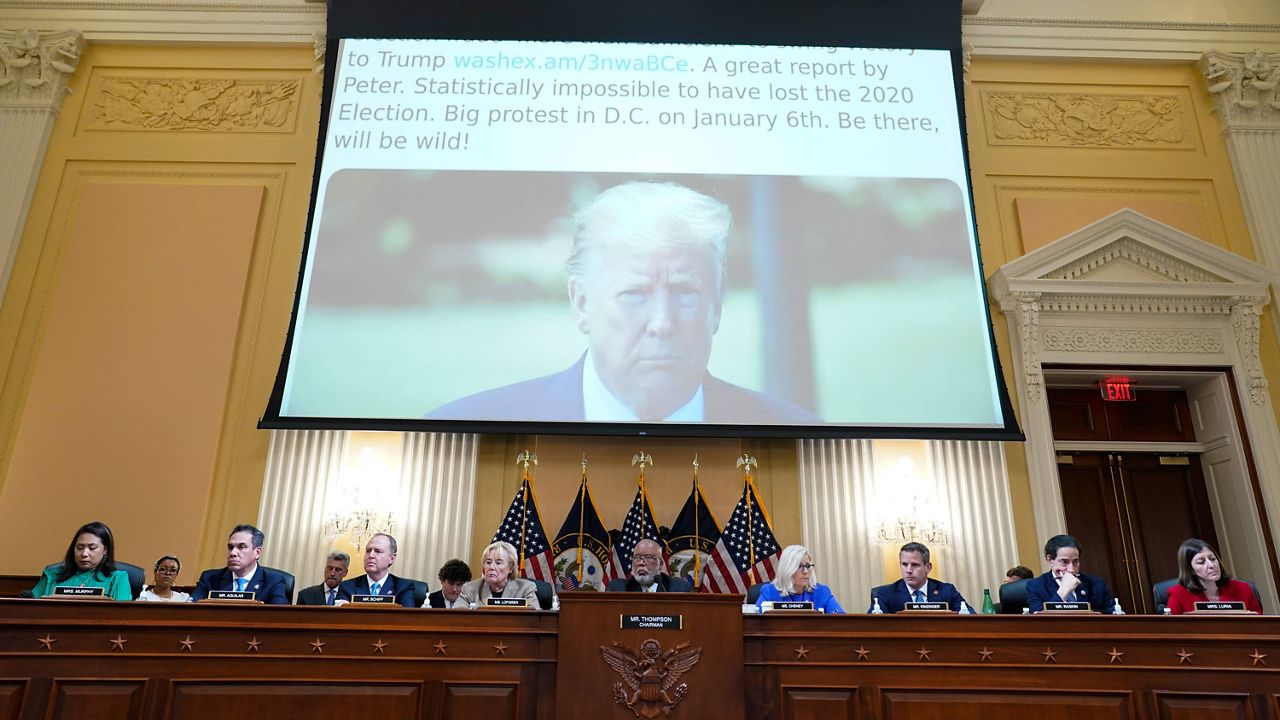 An image of a tweet by former President Donald Trump is displayed at the Jan. 6 committee hearing Thursday at the Capitol. (AP Photo/Andrew Harnik)

Republicans are blasting the first in a series of televised hearings held by the House committee investigating the Jan. 6 insurrection, calling the panel illegitimate and its findings one-sided.


In several posts on his Truth Social platform, former President Donald Trump, whom the committee sought to link to the violence at the Capitol, railed against the revelations the committee presented Thursday night.

Trump complained that the committee did not show interviews or statements from witnesses that presented him in a positive light and that it refused to delve into his claims of widespread fraud in the 2020 presidential election, which he and his allies failed to prove in more than 60 court cases.

The former president seemed especially incensed about a video the panel showed from its interview with former Attorney General Bob Barr, who said he told Trump he “did not agree with the idea of saying the election was stolen and putting out this stuff, which I told the president was b*******.”

Trump attacked Barr as “a weak and frightened Attorney General who was always being ‘played’ and threatened by the Democrats and was scared stiff of being Impeached.”

The committee also showed a video clip of Trump’s daughter, Ivanka Trump, a former White House adviser, saying she accepted Barr’s assessment that there was no evidence of fraud that could have changed the outcome of the election.

"It affected my perspective," Ivanka Trump told the committee. "I respect Attorney General Barr so I accepted what he said was said."

Trump wrote on Truth Social that his daughter “was not involved in looking at, or studying, Election results. She had long since checked out and was, in my opinion, only trying to be respectful to Bill Barr and his position as Attorney General.”

Trump also mischaracterized the committee’s findings that he was sympathetic of his supporters chanting “Hang Mike Pence” at the Capitol.

“I NEVER said, or even thought of saying, ‘Hang Mike Pence,’” he wrote. “This is either a made up story by somebody looking to become a star, or FAKE NEWS!”

Committee Vice Chairwoman Rep. Liz Cheney, R-Wyo., said the panel will present in a future hearing evidence that Trump said upon learning of the rioters’ chants: “Maybe our supporters have the right idea. Mike Pence … deserves it.”

The committee did not say Trump himself said those words.

The former president has defended the rioters’ chants publicly before. Asked in a March 2021 interview with ABC News’ Jonathan Karl about the threatening remarks, he said, “The people were very angry.”

In that interview, Trump then took aim at his vice president for not trying to overturn Joe Biden’s election win when Congress met to certify the results — a power Pence did not have.

“It's common sense that you're supposed to protect,” Trump said. “How can you — if you know a vote is fraudulent, right — how can you pass on a fraudulent vote to Congress?”

Changing the minds of Republicans who have downplayed Jan. 6 is arguably the committee’s biggest challenge.

In an interview with Spectrum News, Sen. Rand Paul, R-Ky., urged people not to watch the hearings, arguing there’s no fairness to them. And while most major networks aired the hearing live, Fox News Channel did not.

As a documentarian who filmed the far-right group the Proud Boys on Jan. 6 and the night before testified in the hearing, Fox News’ Sean Hannity was interviewing Rep. Elise Stefanik, R-N.Y., who, too, called the investigation “a partisan witch hunt.”

“This is about punishing (House Speaker) Nancy Pelosi’s political opponents,” she said.

Stefanik, the No. 3 House Republican, repeated a popular but debunked Republican line of attack by suggesting Pelosi was to blame for the security failures at the Capitol on Jan. 6.

She also argued the hearing was an attempt by Democrats to deflect criticism of Biden on a range of issues that Americans care more about.

“The issues that matter to the American people right now that I hear about from my constituents (are) inflation, sky-high gas prices, the border crisis, the baby formula shortage,” she said. “That's what the American people care about. And Democrats know that they're losing on those issues because they've created their crises.”

Republicans have tried to discredit the committee over its lack of GOP representation. The panel includes seven Democrats and two Republicans.

The GOP, however, had opportunities to participate on a greater scale.

Senate Republicans last year blocked a bill to create a bipartisan, independent commission to investigate Jan. 6 modeled after the body that investigated the 9/11 terror attacks, arguing it would have duplicated other investigations and should also have examined violence during 2020’s racial justice protests across the country.

The House responded by forming its own investigative committee that was to include eight Democrats and five Republicans. But after Pelosi blocked two of Minority Leader Kevin McCarthy’s picks — Jordan and Banks — because they voted against certifying the election, McCarthy pulled all Republican participation in the panel.

Cheney and Illinois Rep. Adam Kinzinger — Republicans who have been critical of Trump and voted to impeach him last year — then accepted invitations from Pelosi to join the committee.

Cheney, who has faced backlash from her own party for her outspoken stance against former President Trump, had pointed words Thursday night for her fellow Republicans.

“Tonight, I say this to my Republican colleagues who are defending the indefensible,” she said. “There will come a day when Donald Trump is gone, but your dishonor will remain.”