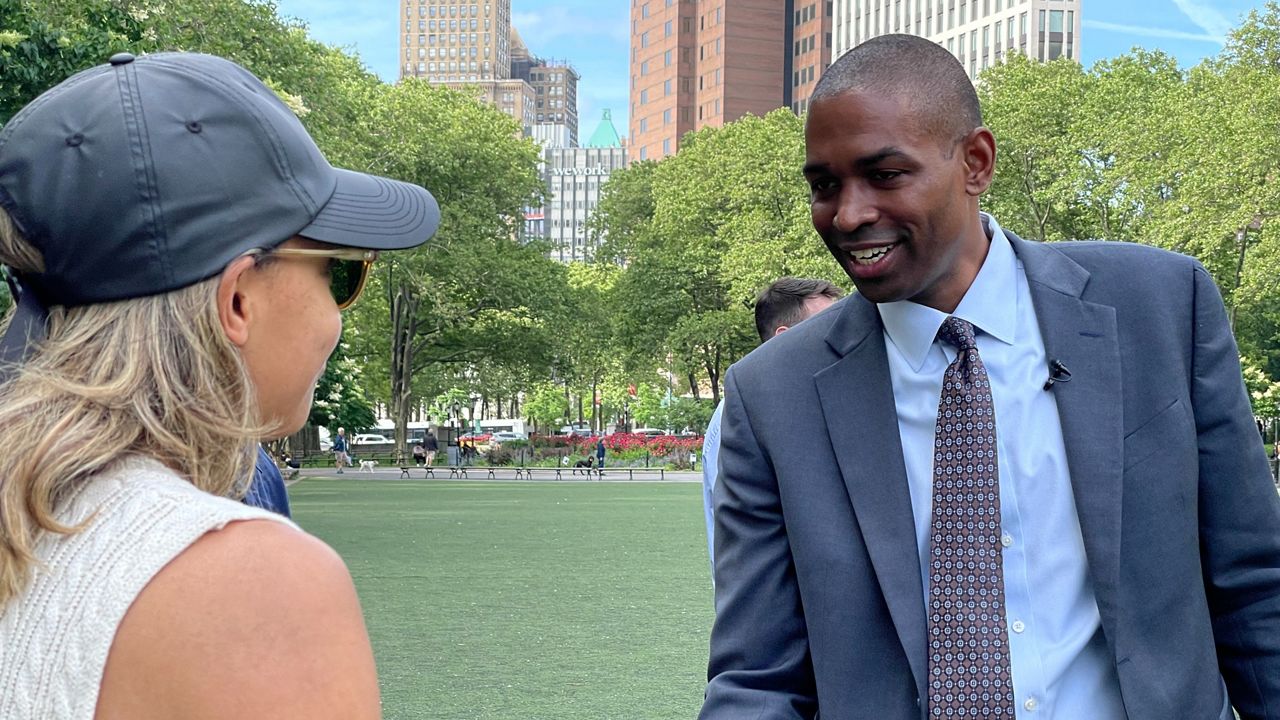 New Lt. Gov. Antonio Delgado meets with a constituent Tuesday as he works to build name recognition ahead of the June 28 Democratic primary. (NY1/Juan Manuel Benitez)

Antonio Delgado is focused on getting people to know him

In a matter of days, New Yorkers will start heading to the polls and Antonio Delgado needs to quickly get his name out there.

“I’m new here. So I’m trying to make sure that I’m out there, that I’m connecting with people,” the new lieutenant governor of New York said.

He was sworn in only two weeks ago and is running in the June 28 Democratic Primary for a full term after being appointed by Gov. Kathy Hochul. It was her second pick after her initial lieutenant governor, Brian Benjamin, was arrested and charged in federal court in connection to a bribery scheme.

“People’s confidence has been battered for decades in Albany,” Hochul said in April.

To swap his name with Benjamin’s on the primary ballot, she got the Legislature to change election law at the last minute.

“You are right, people are cynical. They are dispirited, they are frustrated, they are angry. And I’m incredibly empathetic,” Delgado said when asked whether the move was entirely political.

“My job right now is to make sure that I understand exactly what the needs are of the communities that I wanna make sure I help,” Delgado added.

He had to leave his seat in Congress after representing the Hudson Valley for the last three and a half years.

Polls indicate Democrats could lose their majority in the House next year.

“My focus as a member of Congress was always to do the work for people in my district and make sure that I delivered. And I did,” Delgado said in his defense.

Two Latinas were already on the primary ballot by the time Delgado was selected: Colombian-born Ana María Archila and Dominican-American Diana Reyna. For a long time, New York’s Hispanic community has felt taken for granted and has asked for representation at the highest levels of power.

Many felt misled by Delgado’s heritage, who considers himself Black and Afro-Latino. Delgado’s father is from Cape Verde — a former Portuguese colony off the coast of Africa.

“The Delgado comes from my father, the Latino comes from my mother. Her maiden name was Gómez and her father has roots in Latin America,” Delgado said, adding that his last name is Portuguese.

Quality of life and public safety are his two main priorities, he says.

Delgado will debate his two rivals, Archila and Reyna, for the first time on June 15th on NY1.