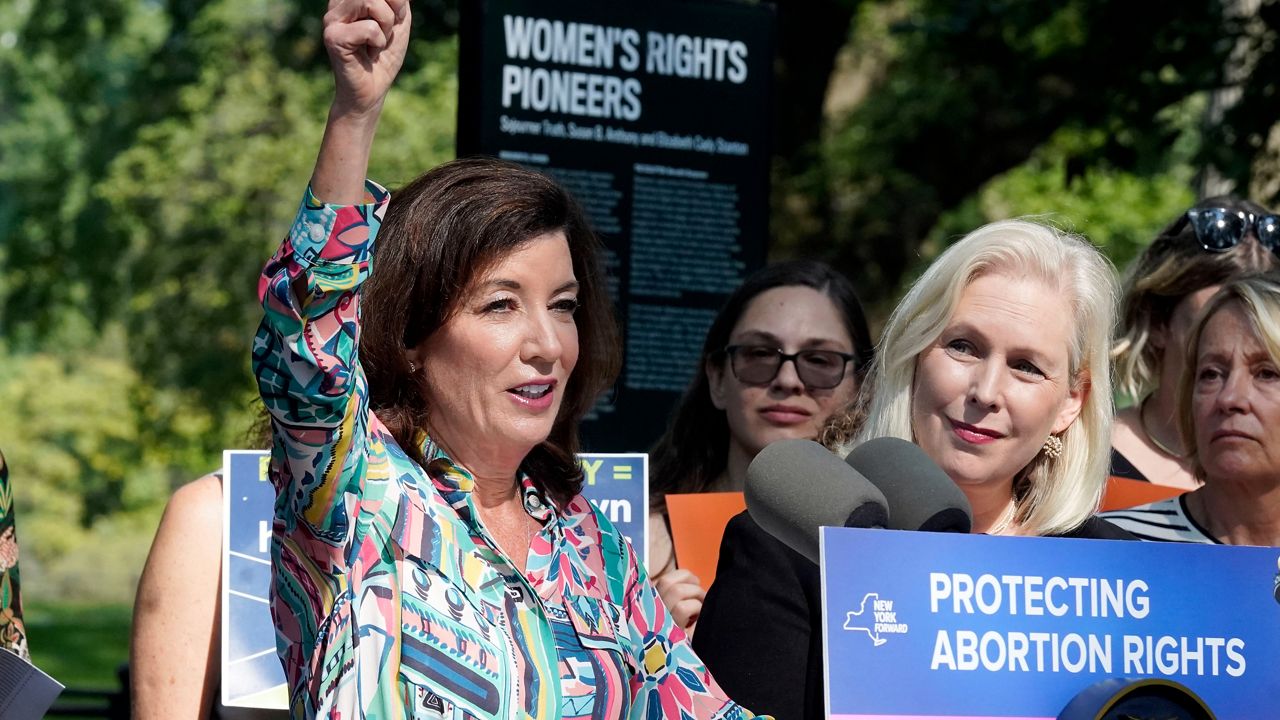 "I am absolutely horrified by what the majority of the Supreme Court of the United States of America plans to do to women's rights in this country," Gov. Kathy Hochul said during an unrelated press conference Tuesday. "This is something that we have fought against for my entire life. In fact, this is a battle my mother's generation, it's a battle from my generation, my daughter's generation, and it seems like even my three-day old grandchild Sophia's generation will have to be fighting this same fight. Something that we had thought we had put to bed a long time ago."

"The Department of Health is working closely with experts and advocates to issue regulations to ensure that telemedicine abortion is available here, to offer clear guidance to providers, and provide information to patients about their right to abortion," the governor added. "We're not playing defense, we're playing offense."

I refuse to let my new granddaughter have to fight for the rights that generations have fought for & won, rights that she should be guaranteed.

For anyone who needs access to care, our state will welcome you with open arms. Abortion will always be safe & accessible in New York.

New York state passed legislation in 2019 codifying Roe v. Wade into state law, a move that guaranteed abortion would remain legal in New York even if the court were to ultimately strike it down. At the time, lawmakers cited that possibility as a motivation for the law.

At a rally held outside City Hall Tuesday morning, City Council members including Council Speaker Adrienne Adams, Brooklyn Councilwoman Farah Louis and Queens Councilwomen Tiffany Cabán and Lynn Schulman strongly denounced the contents of the draft opinion, with Adams calling the hours since it was published by Politico “frightening and angering.”

“A woman’s right to control our own reproductive health choices is not only a decades-long federally protected right, but it’s also an essential human right of self-determination,” Adams said. “I resent any male telling me or my sisters in the United States of America what the hell we can do with our bodies.”

“New York will remain a destination state for any and all women seeking abortion care, and we will continue to provide access to safe, reproductive healthcare for all,” she added.

Schulman, meanwhile, said the issue was “very personal” for her.

“That’s why I don’t have set remarks today, because my great-grandmother died trying to give herself an abortion 100 years ago, and my great-grandfather had to come here with my grandmother and her four siblings, and he couldn’t take care of them, and they grew up in an orphanage,” she said.

“And we’re going backwards now, to that place, and I will never let that happen,” she added. “That is horrible.”

The rally was held the morning after a number of lawmakers from the state weighed in on the draft opinion.

“This draft decision is horrendously wrong and will kill women across the country,” Rep. Nydia Velázquez tweeted. “I won’t stop fighting until abortion is safe and accessible for all.”

In a joint statement with House Speaker Nancy Pelosi, Senate Majority Leader Chuck Schumer said “If the report is accurate, the Supreme Court is poised to inflict the greatest restriction of rights in the past fifty years – not just on women but on all Americans."

"Several of these conservative Justices, who are in no way accountable to the American people, have lied to the U.S. Senate, ripped up the Constitution and defiled both precedent and the Supreme Court’s reputation," Schumer and Pelosi added.

Manhattan Rep. Carolyn Maloney called on the Senate to abolish the filibuster to enshrine abortion rights into federal law. Sen. Kirsten Gillibrand also called for the end of the filibuster, encouraged Democrats to work on flipping legislative majorities in purple and red states, and said states like New York should open their doors to Americans from other states seeking abortions.

“We will not go backwards. It’s our body, our choice, and our vote,” state Attorney General Letitia James said. “We will continue to do everything in our power to protect the right to an abortion and Congress must act immediately to do the same.”

New York City knows that a woman’s right to make her own health care decisions is hers and hers alone.

This potential assault on their freedom by right wing extremists cannot stand.

"People elected Democrats precisely so we could lead in perilous moments like these," Rep. Alexandria Ocasio-Cortez tweeted. "If we don’t, what message does that send? We can’t sit around, finger point, & hand wring as people’s futures + equality are on the line."

Bronx Rep. Ritchie Torres called the draft decision “one of the most disgraceful decisions in the history of the United States.”

The radical right stole two seats on the Supreme Court.

And now the so-called majority apparently plans to rob women of their long-held reproductive freedom.

We will NOT go backward.

“If SCOTUS overturns Roe v. Wade, women’s lives and health will be at risk,” state Comptroller Tom DiNapoli tweeted. “It’s unconscionable that the court would set us backwards.”

Republican gubernatorial candidate Andrew Giuliani released his own statement on Twitter on Tuesday in which he called the draft opinion “an important step in protecting our most vulnerable Americans,” adding that he believed Roe v. Wade was “a fundamentally flawed case.”

One of his primary opponents, former Westchester County executive Rob Astorino also commented on the decision in a statement, saying "abortion isn't going anywhere and New Yorkers understand that, including unabashed pro-lifers like me."

"Kathy Hochul and the Democratic Party will try desperately to change the conversation from crime, taxes, and corruption to abortion, abortion, and abortion, but they won't succeed," Astorino said. "Crime, the cost of living and the highest tax rates in America will remain the key issues in this race whether Gov. Hochul likes it or not."