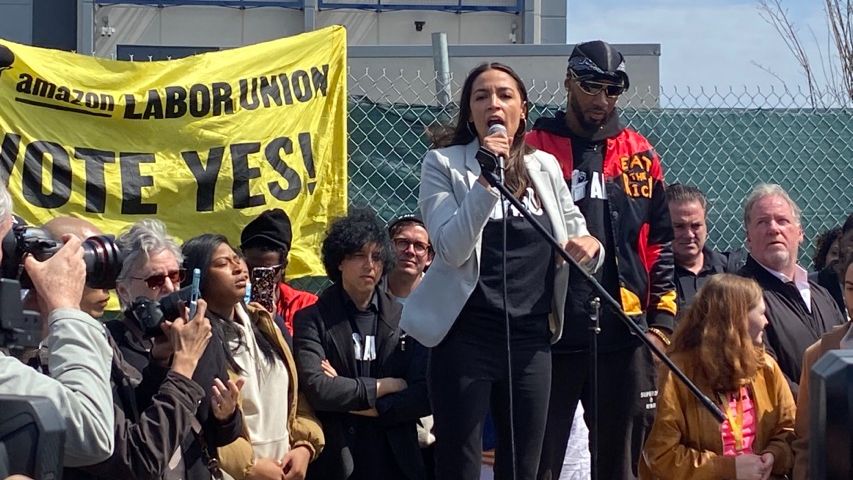 "What you have done in taking on Amazon and having this facility here in Staten Island, the very first Amazon facility to unionize in the entire country, is an extraordinary achievement," Sanders said. "You have taken on one of the most powerful corporations in America."

"What you are doing here is sending a message to every worker in America is the time is now to stand up to our oligarchy," Sanders added.

The rally comes three weeks after Staten Island JFK8 fulfillment center voted to unionize and a day before the nearby LDJ5 Amazon Sort Center is set to hold its own vote. At JFK8, 55% of workers who voted in the election opted to join the Amazon Labor Union, which has demanded higher pay and job security.

Sanders and Ocasio-Cortez framed the labor organizing on Staten Island as the opening salvo of a larger effort to unionize Amazon facilities and other workplaces throughout the United States.

"We got emails from Walmart, we got emails from Target, Dollar General, from Apple, from Starbucks. We are going to take over the country. The workers are," Smalls said. "This is just the beginning. Stay tuned."

Amazon founder and executive chairman Jeff Bezos was a frequent target of the two progressive politicians.

"What this struggle is about is not just Amazon and Staten Island. This is the struggle taking place all across this country," Sanders said. "Working people are sick and tired of falling further and further behind while billionaires like Bezos become much richer."

Ocasio-Cortez criticized Amazon for not yet recognizing the union despite the successful election. The company is currently disputing the results, claiming the union organizers may have broken laws.

"When these workers win fair and square they refuse to recognize their victory," Ocasio-Cortez said. "Jeff Bezos, Amazon, everybody, we got to recognize the fact that they did this thing and they won a union election."