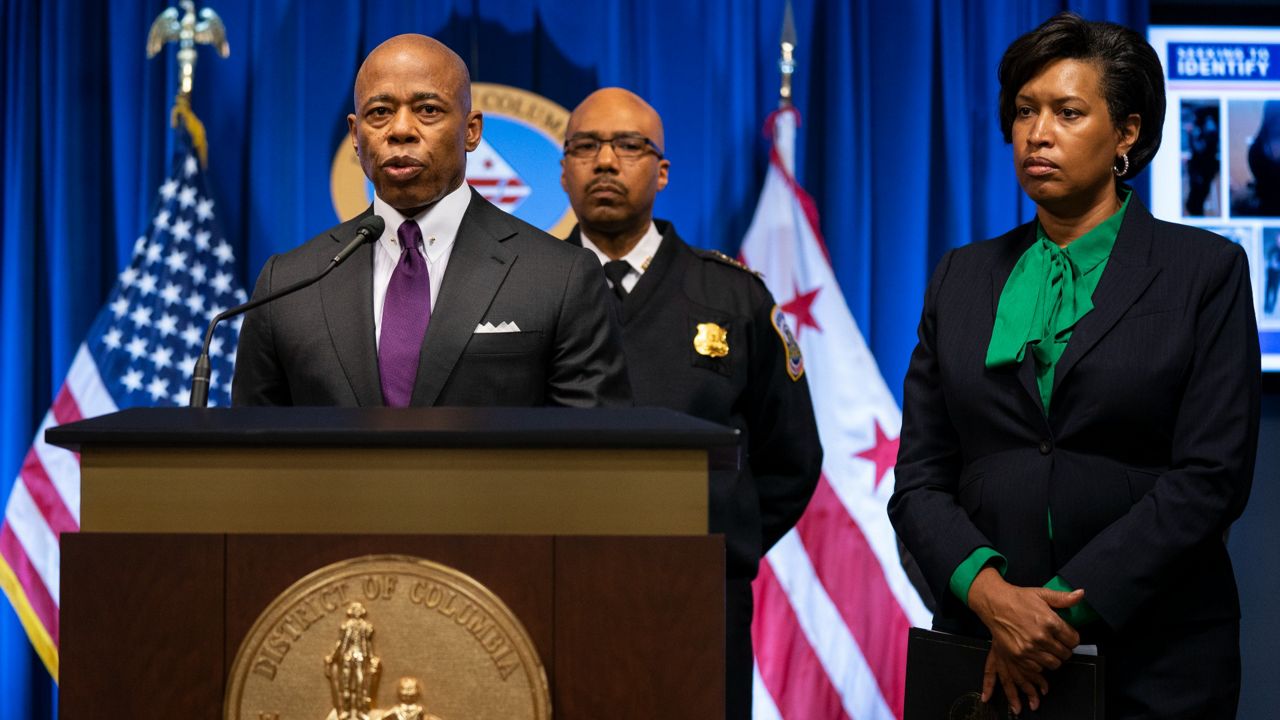 New York Mayor Eric Adams speaks during a news conference with Washington Mayor Muriel Bowser about the search for a gunman that has been targeting homeless men sleeping on the streets of Washington, and New York City, Monday, March 14, 2022, in Washington. (AP Photo/Evan Vucci)

Adams pressed on crime, other challenges in first 100 days in office

Mayor Adams said he’s been working around the clock to improve the city that never sleeps.

But nearly 100 days into his term, the results of that grind aren’t yet apparent, particularly when it comes to public safety.

Adams told another news outlet Friday that he’d grade himself as an “I” – for incomplete.

He told NY1, “I am a tough grader and I am impatient. I want changes right away. We have to be safe. Every time a gun goes off, we are endangering the life of New Yorker.”

The former police captain was elected on a pledge to get crime under control while ushering in a fairer criminal justice system.

But overall index crime was up 37% last month compared to March of 2021. It will take more time to see whether his new anti-gun unit is effective.

Adams said those specialized police officers have removed more than 30 guns from the streets in three weeks – with authorities seizing a total 1,000 guns in New York City in three months.

“I continuously state that there are many rivers that are feeding this sea of violence and Washington must give us the assistance we need,” he told NY1, telling other outlets that he’s also looking to Albany for help.

Adams spoke with “Mornings on 1” as part of a news media blitz on a day that included attending Opening Day for the Yankees and being briefed on a triple shooting in the South Bronx.

The mayor has sought to rev the city’s economy, including its nightlife and sports teams, while confronting not just crime but the related issues of homelessness and COVID.

“I’m going to be with New Yorkers and show that we’re going to cycle out of COVID and the economic strife that we’re living through right,” he said.

He said he’s committed to a better, quote, quality-of-life for New Yorkers at large.

But critics have called his dismantling of more than 300 homelessness encampments in two weeks inhumane.

“Heart-wrenching is the inhumane condition of someone living in a tent with human waste inside, syringes, unable to take a shower, unable to have clean clothing,” he said.

Another challenge in Adams’ next 100 days as mayor is the increasing number of COVID cases due to the BA.2 subvariant.

The mayor is weighing when to drop the masking mandate for toddlers – a policy he had extended.

He told 1010 WINS on Friday, “I’m hoping that we can do it within a week or so, but it’s really dependent on how this new variant responds.”