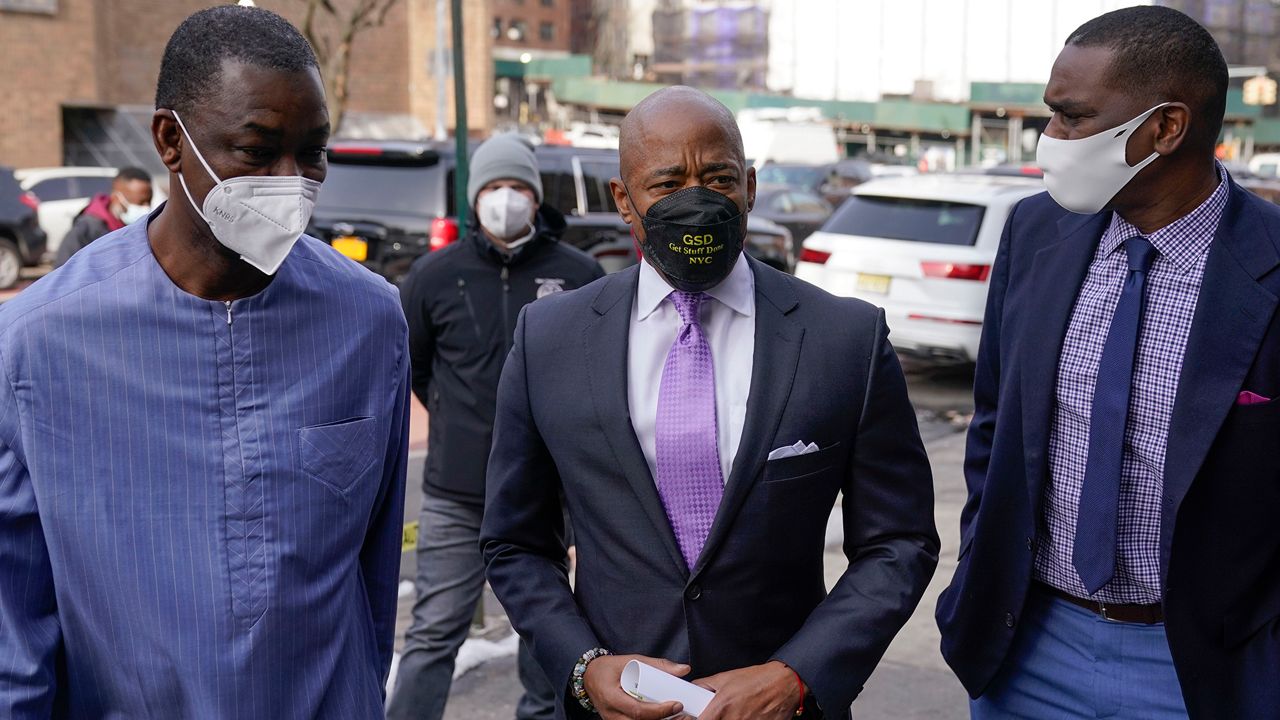 New York City Mayor Eric Adams, center, arrives to visit the Masjid-Ur-Rahmah mosque in the Bronx borough of New York, Friday, Jan. 14, 2022. At least a dozen of those who perished in an apartment building fire worshipped at the nearby mosque. (AP Photo/Seth Wenig)

After being in office for just two weeks, Mayor Adams is dealing with multiple crises, some beyond his control and some of his own doing, from a deadly fire in the Bronx to keeping schools running as COVID-19 cases soar.

The mayor has also been busy defending a controversial move of hiring his brother to be in charge of his security detail.

"I'm going to hire the best people for the job, that I've known throughout my years in government, and the reason I can do that is because I'm the mayor," Adams told reporters during an unrelated press conference in Queens on Friday.

Adams has also suggested he's getting additional scrutiny for his hiring decisions, insisting that other mayors before him did not receive the same level of criticism.

"Other mayors hired their law partners, hired people they knew from school from when they came up through the ranks, how there was nothing to say about it?" Adams said. "But I have the audacity to hire some blue-collar people, everyday folks who are union members or retired members, and it's like, 'Who do you think you are?'"

Despite the mayor's assertion, mayors before him did face intense scrutiny for their hiring decisions, who they chose as advisors, and those who were brought into the inner circle of City Hall.

Still, the mayor is defiant.

"I'm not going to allow people to dismantle my ability to build the right team, no matter who it is at the time," Adams said.

Adams' hiring decision is under review by the Conflicts of Interest Board.

The week started with the aftermath of a devastating fire in the Bronx that killed 17 people, including nine children. The mayor responded in part by reminding New Yorkers to close the door in the event of a fire. An investigation remains underway but some have been critical of the mayor for not placing more attention on the landlord. One of the building's owners sits on the Adams transition team.

"It's about informing, because any day, we can have another fire, and for me to play a role in saying, the best thing we can do, as I learned as a child, is close the door, and we need to amplify that message," he said.

On Friday, he stopped by the historic Steinway and Sons piano factory in Astoria, part of his push to encourage workers back to the office.

But as he tries to encourage recovery, the city is still grappling with rising cases of COVID-19, many offices have, in fact, not reopened, and the cold winter continues to cast a pall over the new year.

While Adams has tried to project optimism, he's also been forced to change course. Despite a push to keep schools open, Adams was forced to offer support for creating a remote option for schools, where attendance remains low and COVID-19 cases are high.