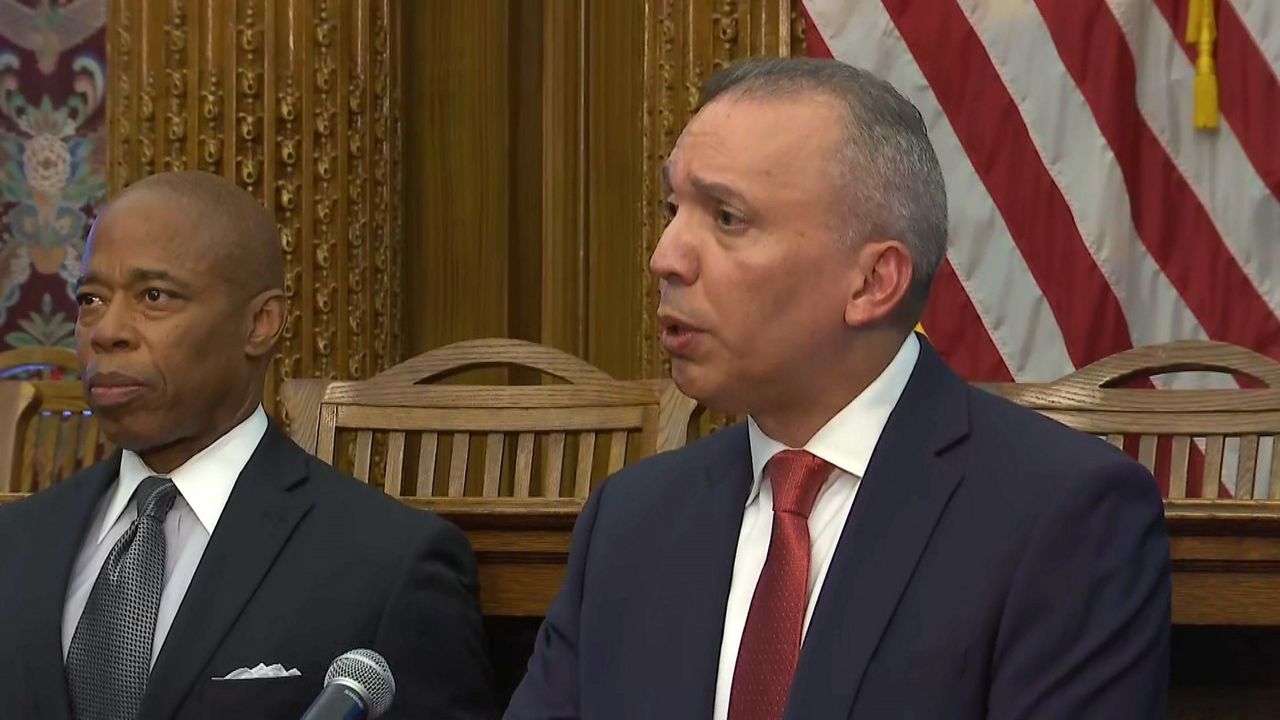 Mayor-elect Eric Adams with Louis Molina, his pick for Department of Correction commissioner, at a press conference on Dec. 16, 2021. (NY1 Photo)

NEW YORK — Mayor-elect Eric Adams has named Louis Molina, a former NYPD detective and the current chief of the Las Vegas Department of Public Safety, as the next commissioner for the city's Department of Correction.

Adams made the announcement Thursday morning at Brooklyn Borough Hall, saying Molina, who grew up in the Bronx, "knows our city."


"The next commissioner of our Department of Correction must be someone who can balance the twin imperatives of public safety and reform. Someone who has a forward-thinking, holistic vision for our correctional system on how to move forward," Adams said. "[Molina's] career has spanned the three main pillars of the criminal justice system: law enforcement, prosecution and correction."

After Adams introduced him, Molina said he was "humbled to serve as the next commissioner of the Department of Correction, overseeing New York City's boldest."

"The need for reform of our city jails has never been more urgent than it is now," he said. "I understand the flaws embedded in our system, and the urgent need for reforms that balance the need for safety with the imperative of upholding human dignity."

"As commissioner, I will work with Mayor Adams to immediately improve conditions on Rikers Island for correction officers and the incarcerated population," he added. "We will not tolerate rampant violence, inhumane conditions and a general culture of disorder in Rikers."

Molina, a former U.S. Marine, will take over the DOC at a time of crisis. The agency, which is tasked with operating the main correctional complex at Rikers Island and other jails around the city, is currently dealing with COVID-19 cases at the jails and a staffing crisis created by thousands of officers who for months have routinely failed to report for duty.

In addition to his time at the NYPD and DOC, Molina briefly worked in the Brooklyn district attorney's office and the enforcement arm of the Taxi & Limousine Commission.

Molina will also face the challenge of helping the Adams administration adopt a plan to close the city's massive island jail complex in favor of building smaller neighborhood jails. Adams has said he believes Rikers Island should close by 2027, but he has also said he would meet with incoming City Council members to consider their positions.

In recent months, a federal monitor tasked with overseeing Rikers Island has sounded the alarm over a lack of proper medical and mental health care and conditions that put officers and detainees at risk. So far this year, 16 DOC detainees have died, including five who died by suicide — making 2021 the deadliest year since 2013, when the jail population was double what it is today.

Just two days ago, the department confirmed William Brown, a 55-year-old detainee, went into distress and died shortly before midnight on Tuesday. The cause of his death remains under investigation.

The city's jail system has been overseen by a federal monitor since 2015 as part of a settlement between the city and the U.S. Justice Department from a lawsuit over civil rights violations against juvenile detainees. Since the city entered the federal agreement, known as the Nunez settlement, conditions at Rikers have fluctuated over recent years and during Mayor Bill de Blasio's tenure.

During the announcement Thursday, Adams committed to reinstating a policy the United Nations has said amounts to torture: the use of solitary confinement.

"You can have segregation without it being inhumane," the mayor-elect said.

Also known as punitive segregation, it's a practice that de Blasio promised to end this year after multiple instances of abuse resulted in the deaths of people in custody. While de Blasio's commitment to ending the practice remains in question, Adams and Molina said they see punitive segregation as a tool to deter the most violent offenders.

"We're saying if you exhibit violent behavior on inmates or correction officers, you must be removed from general population," Adams said.

"There are violent people, a percentage, on Rikers Island and we need a method of restrictive housing solution for them in order to make sure they don't hurt or injury anyone else," Molina said.

Research shows solitary confinement is linked to increased risks of self-harm and suicide and worse mental health outcomes, and some studies have shown confinement does little to decrease violence.

Years of evidence show that violent behavior is not the only reason detainees end up in segregation.

"She wasn't thrown in the hole simply because of bad behavior," Melania Brown said. "She was thrown in solitary because of her gender identity."

Brown is the sister of Layleen Polanco, a transgender woman who died at Rikers Island in 2017 after staff failed to provide her with medical care while she was held in solitary. Officers watched on for 47 minutes as Polanco lay dying after she suffered an epileptic seizure.

"Solitary confinement is not used for behavioral problems. It's not. It's used to torture people," Brown said.

NY1: Are you putting that policy back in place?

"We're not going to give up," Brown said. "He's got another thing coming because we have a lot of fight left in us."

Last April, former Gov. Andrew Cuomo signed a bill into law to end the use of long-term solitary confinement in prisons and jails in New York, but the law will not take effect until next year. Advocates are pledging to push back.