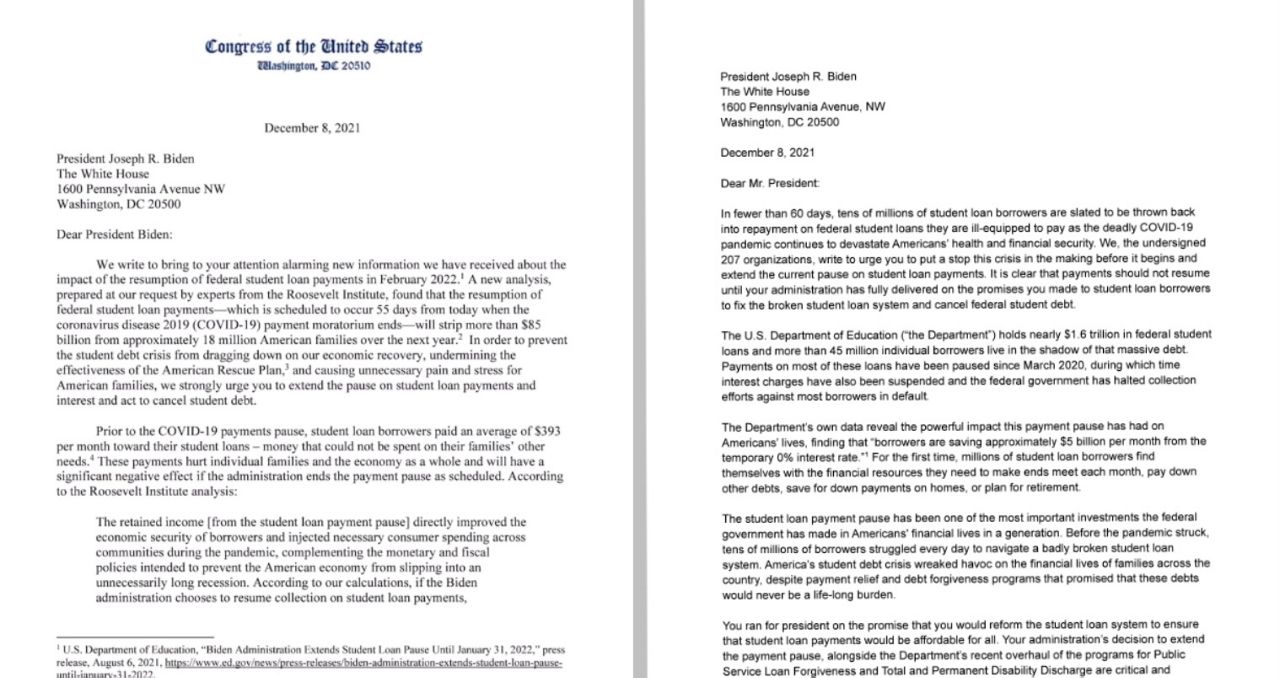 Two letters were sent to the White House this week and both ask President Joe Biden to extend the current pause on repaying federal student loans.

The pause, first implemented by President Donald Trump and then extended by President Biden, has been in place since March 2020, but is set to expire at the end of January 2022.

Among those petitioning that the moratorium continue are two Massachusetts lawmakers and several organizations with ties to the state.

Senator Elizabeth Warren co-authored one of the letters with Representative Ayanna Pressley and Senator Majority Leader Chuck Schumer. They said that if Biden extends the moratorium on federal student loan payments, that it would free up about $85 billion over the next year.

They estimate that's the amount borrowers would have to spend on other necessities if they didnt have to worry about repaying their loans.

Leaders with the Roosevelt Institute, a Washington, D.C. think tank, said that the savings for each borrower could have a significant impact on the economy.

“We see that the average monthly payment of $393 a month for student loans borrowers is really counterintuitive to enabling households to keep as much money as they can during these hard times,” said Ali Bustamante of the Roosevelt Institute.

Student Loan Hero, a company that helps borrowers manage their student debt, estimates that the average student loan payment for a borrower in Massachusetts is slightly less than the national average at about $310 a month.

The second letter was spearheaded by the Student Loan Borrower Protection Center, an advocacy group for those with student loan debt.

They, and more than 200 other organizations, including the ACLU and the NAACP, cosigned the letter.

The organization estimates that 45 million borrowers across the US are currently saving a total of $5 billion a month because of the moratorium.

The National Association of Social Workers, which has a Massachusetts chapter, also cosigned the letter.

Representatives of the organization said that many of their members are drowning in student debt and they believe the pause would help them as the pandemic continues.

They also believe it would allow them to hold off on payments long enough for President Biden to take up the issue of student loan forgiveness.

During his campaign, President Biden said that student loan forgiveness was one of the issues he planned to address during his term in office.

“We are working with crushing student loan debt. We have very high educational requirements for clinical social work practice in particular, huge associated student loan debt loads. We have depression and anxiety doubled during the pandemic . Its been just a really unbelievable time for our workforce and this payment pause has at least provided some relief.  Where families do not have to worry about paying the student loan payments,” said Sarah Butts of the National Association of Social Workers.

Several other groups from Massachusetts signed the letter from the Student Loan Borrower Protection Center including the Massachusetts Affordable Housing Alliance and the non-profit Zero Debt Massachusetts.

Some economists believe that the moratorium, in part, has helped the economy recover from the pandemic by giving borrowers more money to spend.

Financial experts have also suggested that bringing back student loan payments now might make borrowers less able to participate in the economu and help it grow.

Spectrum News asked the White House for a response to the two letters but did not received a reply.