The GM factory just officially re-opened on Wednesday, as the company spent years and $2.2 billion to upgrade to an all-electric vehicle production center. GM has committed to making all of its U.S. operating facilities with 100% renewable energy by 2030, and across all of its global facilities by 2040.

Biden said the cars that will be produced at facilities like the one in Detroit represent “proof that America has what it takes to win the competition in the 21st century.”

But before touting the $7.5 billion included in his new infrastructure law for electric vehicle chargers, Biden — a self-proclaimed car guy who has tested his fair share of electric vehicles as president — punched the accelerator on a battery-powered Hummer, causing the wheels to squeal and the truck to jet forward.

The engine was quiet as the president pulled up to a waiting delegation of reporters and officials.

“Anyone wanna jump in the back?” Biden asked. 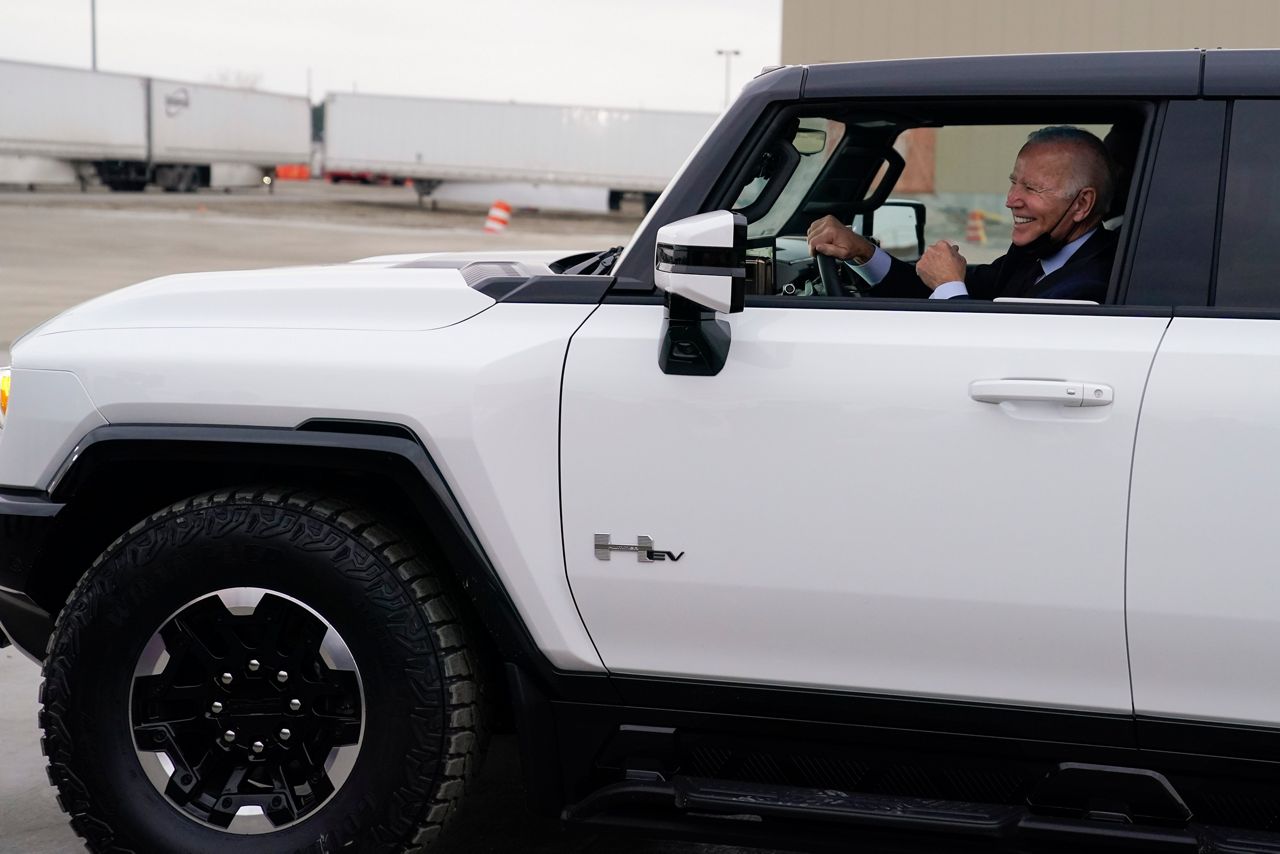 Biden hopes that the new investment in electric vehicle infrastructure will help America get “off the sidelines” on green-energy manufacturing. Currently, the U.S. market share of plug-in electric vehicle sales is one-third the size of the Chinese EV market.

As Biden toured the plant, he noted that the U.S. was not yet leading with electric vehicles, something he believes his infrastructure package and additional investments in clean energy can change. The Hummer he drove has a starting price of $108,700, as the electric market seems designed so far to serve luxury buyers instead of a mass audience.

“We risk losing our edge as a nation, China and the rest of the world are catching up. Well, we're about to turn that around in a big, big way,” Biden said. “When you see these projects starting in your hometowns, I want you to feel the way I feel: Pride in what we can do when we’re together as the United States of America, and it starts here in Detroit.”

Republicans, even some of those who voted in favor of the infrastructure package, are criticizing Biden for being preoccupied with electric vehicle technology at a time when Americans are contending with a spike in gasoline and natural gas prices.

Senate Republican leader Mitch McConnell took the Senate floor Tuesday to make the case that “the Biden administration doesn’t have any strategic plan to snap its fingers and turn our massive country into some green utopia overnight.”

“They just want to throw boatloads of government money at things like solar panels and electric vehicles and hope it all works out,” said McConnell, one of 19 GOP senators who voted in favor of the infrastructure bill. He added, “American families are staring down the barrel of skyrocketing heating bills, and the Democrats’ response is to go to war against affordable American energy.”

White House press secretary Jen Psaki has stressed that the administration is looking at “every tool in our arsenal” to combat high gasoline prices, saying that Biden and his economic team are “quite focused” on the issue.

Biden has asked the Federal Trade Commission to monitor gasoline prices and address any illegal conduct being observed and is engaging with countries and entities abroad like OPEC on increasing supply.

Biden went a step further Wednesday, sending a letter asking the FTC chair to consider investigating “whether illegal conduct is costing families at the pump.” The letter noted an “unexplained” gap in the price of unfinished gasoline and prices for consumers at the pump.

The president on Wednesday also addressed reports that the Bureau of Labor Statistics (BLS) underestimated summer job growth by around 700,000 jobs. Revisions to unemployment data are not unusual, but one of this magnitude is.

“We've learned today the job growth in the nation has been even stronger than previously reported every month since I’ve been president,” Biden said, adding: “It's good news that Americans are working and wages are up as well.”

But in Michigan, the numbers went the opposite way.

The federal government on Wednesday corrected Michigan’s unemployment rate upward by 1.7 percentage points, above the U.S. average, citing an outlier in statistical modeling last winter — amid sharp job swings during the coronavirus pandemic.

The problem stems from inputs into a model for the Detroit-Warren-Dearborn metropolitan area for January, which produced “some distortions” in benchmarking factors used for Michigan, according to the U.S. Bureau of Labor Statistics. State officials said they notified the agency of the issue in May.

Michigan’s unemployment rate had dropped substantially last January, from 8.2% to 5.7%, to below the U.S. average.