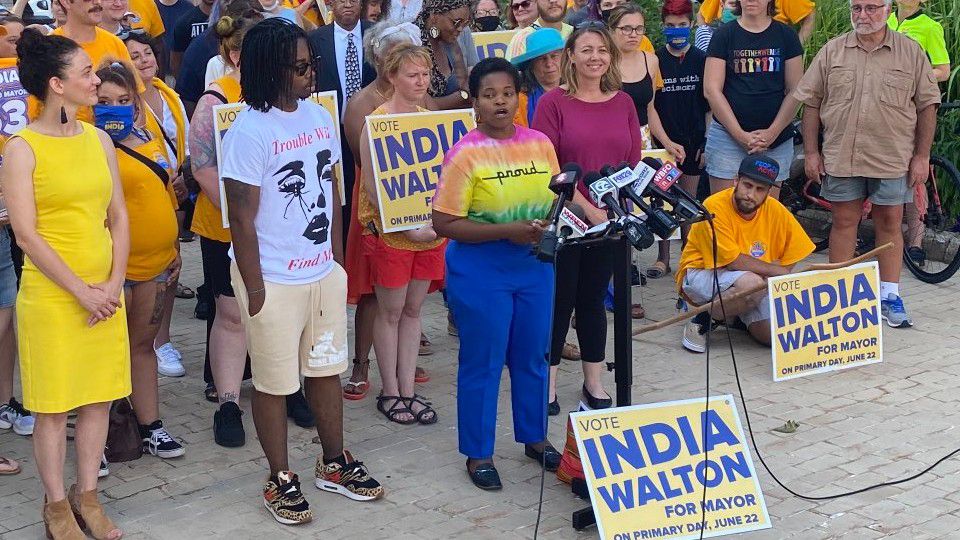 State and congressional leaders in New York are calling on state Democratic Party Chairman Jay Jacobs to resign after his exclusive interview with Spectrum News 1 in which he used former KKK leader David Duke in a hypothetical analogy to explain why the Democratic Party is not endorsing India Walton, a Democratic Socialist who won the primary in Buffalo.

“Jay Jacobs absolutely should resign over his disgusting comments comparing a Black single mother who won a historic election to David Duke,” Rep. Ocasio-Cortez said on Twitter. “India Walton is the Democratic nominee for mayor of Buffalo. No amount of racist misogyny from the old boys’ club is going to change that.”

But when asked about these comments Jacobs made, India Walton, who is at the heart of it all, said she understands people make mistakes.

“Initially, I was disappointed. But also, I've not always said the right thing at the right time, so I extend a lot of grace to Mr. Jacobs," Walton said. “I think that had he had an opportunity to know who I am and what kind of person I am, he wouldn't have made that type of parallel. I mean clearly, I'm a Black woman, but I'm also a mother and a nurse.”

.@Indiawaltonbflo also weighs in on comments made by @GovKathyHochul who said she will not be endorsing either candidate in the Buffalo mayor’s race:

“She’s got a state to run that has challenges of its own, so I can completely understand why she would want to stay out of it.” pic.twitter.com/9jrzM1OYkw

Jacobs on Monday, in this exclusive interview, was asked what sort of precedent it sets if the Democratic Party does not endorse the candidate who won the Democratic primary, pointing to India Walton.

Walton won the Democratic primary in the Buffalo mayor’s race, but the incumbent in the race, Mayor Byron Brown, who is also a Democrat, is now staging a write-in campaign for the general election.

Jacobs launched into a hypothetical, saying if former KKK leader David Duke were to win a primary, the Democratic party would not be required to endorse him, noting however, that Walton and Duke were in a different category.

There was an almost immediate fierce backlash, which forced Jacobs to apologize for his comments.

"What Jay Jacobs did was wrong, it was very disturbing, totally unacceptable and was hurtful,” Hochul said. “India Walton did not deserve that."

But Gov. Hochul said she will not be endorsing either candidate in the race and called it a unique situation since there are two Democrats running in the general election.

“The process allows people to exercise different ways to be considered by the voters in November as well and that's part of the state law, that that is an option available to them,” Hochul said. “My position is, I will support whoever emerges from that election.”

Walton said she is understanding of why Hochul might be constrained from making an endorsement in the race.

“She's got a state to run that has challenges of its own, so I can completely understand why she would want to stay out of it,” said Walton.

But Walton’s race is indicative of the growing divisiveness within New York’s Democratic Party, between progressives and the more moderate establishment Democrats.

If elected, Walton would be the first Democratic socialist to be elected mayor of a major American city in more than 50 years. She says she hopes that this race will be the match that ignites and changes how top Democrats in the state view progressive candidates.

“I do hope that there is more unity,” Walton said. “It’s my hope that we will invigorate and bring some new life into the Democratic Party, but also work alongside our established Democrats to bring real change and progress to our communities.”

Byron Brown's campaign did not return a request for comment.

Early voting in New York starts on Saturday. To launch early voting in her home city, India Walton's campaign has announced that she will be joined by Rep. Alexandria Ocasio-Cortez for a rally in the Town Ballroom on Main Street this Saturday. The event will take place from 11 a.m. to noon.