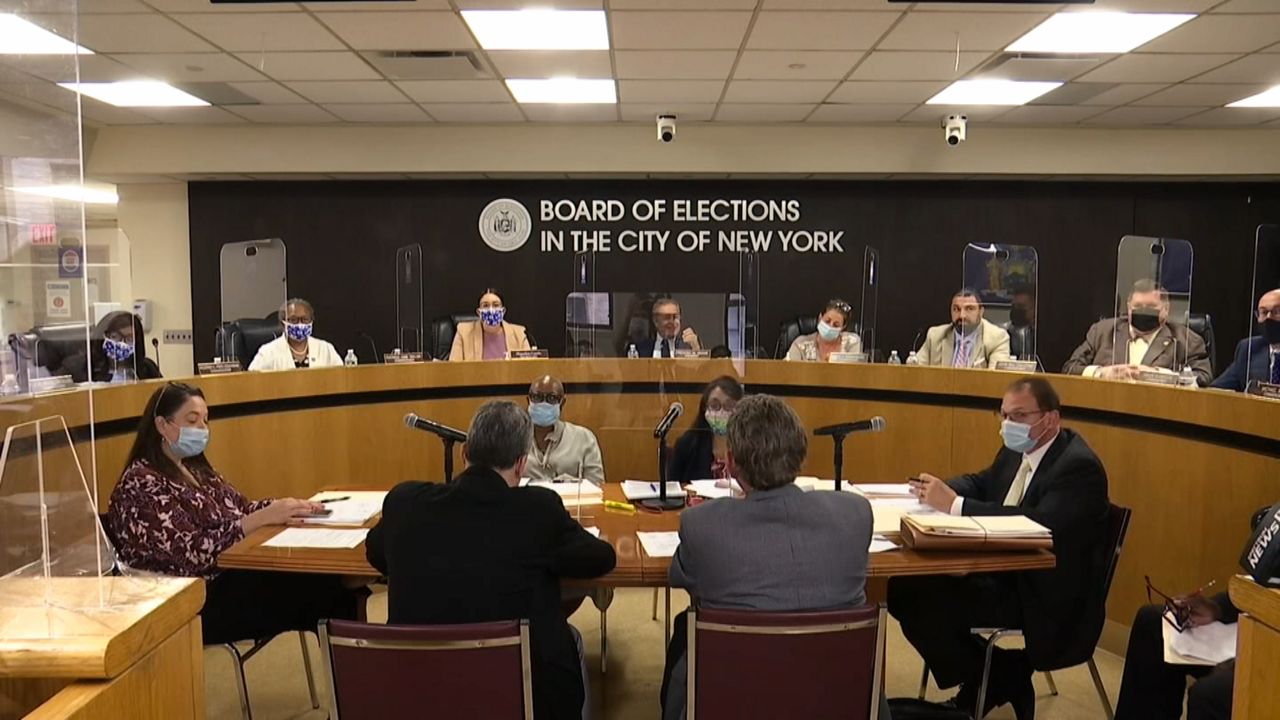 A file image of a New York City Board of Elections meeting.

Ballot Blunders: How to fix the NYC Board of Elections

NEW YORK — Mary Vaughan stands outside of the Brooklyn school where she first served as a poll worker.

"This was my first assignment,” Vaughan said. “The reason why I kind of started doing it was, I saw an advertisement that they were short on poll workers and I was like, ‘This is a big election, this matters so much.’”

She first served as a poll worker during the 2018 midterm election. The turnout was massive. The scanners at the poll site went down.

"Our emergency ballot box got so full that we then had to like pull the physical bag out and people were just like stuffing their ballots into like a bag,” Vaughan said.

During this year's primary, Vaughan said there were other challenges.

"At my site, more than half of the poll workers who were supposed to show up that day didn't show up."

She told NY1 it is not exactly an experience that boosts her confidence in the city's election administration.

"There's so many failures along the way,” Vaughan said. “If I were on the voting end and saw what had happened at, say, the poll site that I was at, in central Brooklyn in June, I would have seriously wondered if my vote was going to be counted.”

For years, some poll workers, advocates and elected officials have slammed the New York City Board of Elections (BOE), claiming patronage and nepotism have lead to serious dysfunction at the board.

Board officials say its issues do not come from its hiring practices.

"The overwhelming number of instances — when it happens, when there’s a mistake — it happens at poll sites on Election Day,” New York City Board of Elections Executive Director Mike Ryan said. “It’s not as much happening in the general offices or in the borough offices and the work that they do."

Still, now, perhaps more than ever before, critics are calling for change.

"We were stunned to see how in very basic ways — from how leadership are selected, what their qualifications have to be, to how staff are hired and how the agency operates — New York City is possibly the worst in the nation and certainly an extreme outlier in just some basic ways a public agency should function,” said Chisun Lee of the the Brennan Center for Justice.

Last month, the Brennan Center released a report detailing some of the board's systemic issues. And, like many other groups, it says the time to change the system is now.

"Everything we recommend in our report — from creating a more publicly accountable commissioner appointment process, to better training and improving public hiring, to beefing up accountability at the top of the agency when things go wrong — all of these things can be mandated by the state legislature right now without a constitutional amendment,” Lee said.

Generally, stakeholders and advocates say there are two separate options to change the BOE.

One involves changing its bipartisan structure, perhaps making it nonpartisan. That would mean changing the state constitution, which is a difficult task. It requires the state legislature to pass legislation not once, but twice, in two consecutive legislative sessions. And then it goes to the voters.

Currently, the other option is gaining some attention: legislation in Albany to professionalize the institution.

"Three weeks before any election in New York City, I stop and say, 'Gee, I wonder what's going to go wrong this time?' and I have never been disappointed,” said Democratic State Sen. Liz Krueger of Manhattan. “That's a problem."

Krueger has pushed for a bill to change how the board's leadership is selected.

"It would require qualifications for the senior staff at the board, and decisions about who the senior staff are would be made by a combination of review by the mayor, the comptroller, the City Council speaker,” Krueger said.

"We would like to take away some of the historical patronage, electoral two-party control of the process, and make it to some degree a less political assignment,” she added.

It's unclear whether her proposal will have enough support to actually move forward, considering it would potentially weaken the influence of the county political organizations these lawmakers rely on.

"There are certainly some people out there who think that I, as a legislator, shouldn't be messing with a system that was designed outside of the context of the legislative process,” Krueger said. “I disagree with them."

The board's leadership has not backed any changes, simply saying it would comply with whatever the state legislature decides to do.

But, for those on the ground on Election Day, making sure workers are qualified could make a big difference.

"I think there is a little bit of a, we-don't-want-to-accept-the-help-we're-being-offered-we've-got-this maybe attitude and not a lot of oversight and not a lot of transparency about how people get into the roles they get into and whether they're qualified,” Vaughan said. “That really comes down and affects the poll workers, and makes a lot of people have bad experiences and don't want to come back and do it."