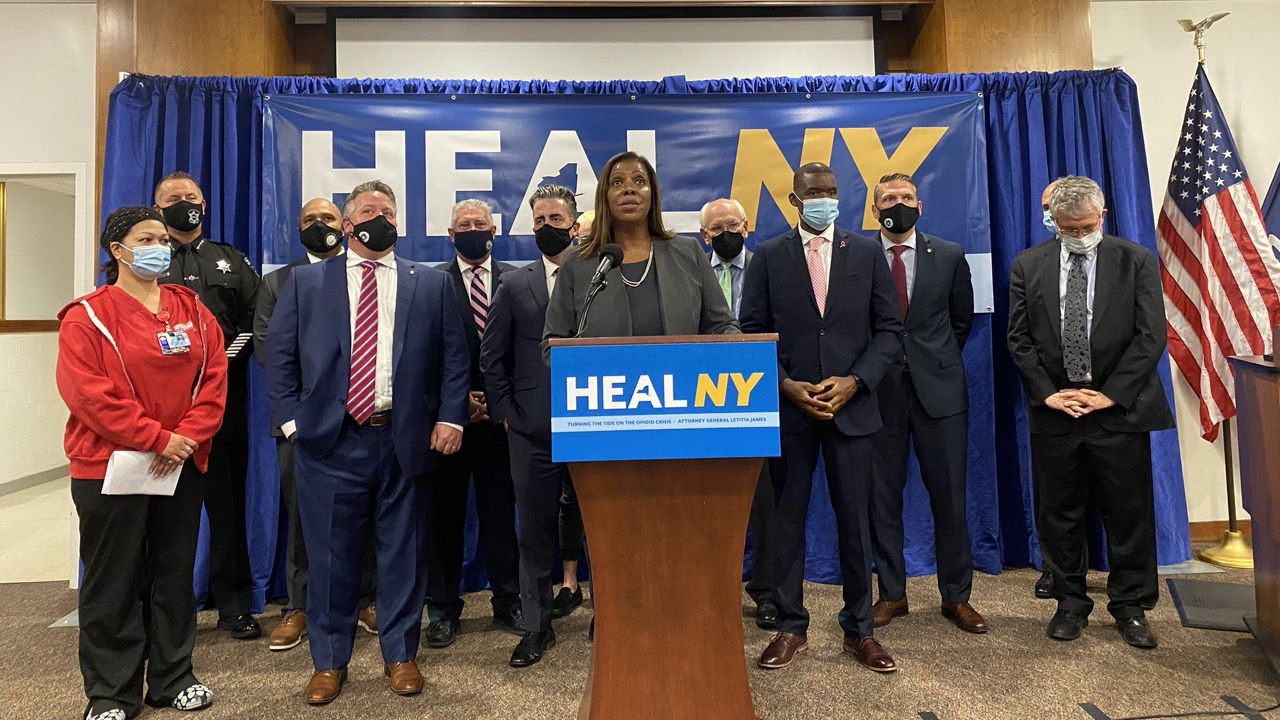 NY Attorney General James takes her message on the road

New York State Attorney General Letitia James, on a statewide tour to distribute $1.5 billion to all 10 regions of the state, in order to combat the opioid epidemic, stopped in Albany on Tuesday.

This $1.5 billion fund comes from different settlements with opioid manufacturers, James was able to negotiate on behalf of the state.

Local and county leaders praised James for her work securing this money from these historic lawsuits.

“It was through the courage, the organization, the tact to manage so many issues and so many people,” Stephen Acquario, with the State Association of Counties, said. “It took persuasion and it took passion and I want to thank Tish James for all of those qualities. You did it.”

“To see the power of the system working to actually help people, it gives us hope,” Albany County District Attorney David Soares said, turning to James.

But James’ statewide tour, handing out large checks to dozens of counties throughout the state, comes at a pivotal moment.

James has been openly weighing her own run for governor, but declined to offer her thoughts on this recent endorsement.

“I'm not focused on politics,” James emphasized. “I'm focused on healing and making sure that individuals understand that there are resources now available for all those who are struggling with opioids.”

Hochul meanwhile on Tuesday sent out a list of endorsements signed by 10 upstate Democratic committee chairs.

However, many prominent political figures are waiting to officially endorse either Hochul or another candidate, at least for now.

“Right now, our whole focus is on infrastructure and delivering what is very important, not only to New York, but to the country,” Congressman Tonko said. “There will be a time for all of that work.”

When pressed further if he was waiting to see who he is going to support, Tonko replied, “Sure.”

“Both these women have extraordinary things to offer New York State,” McCoy said, also declining to answer who he favored as a candidate.

McCoy questioned why this was needed.

“I really don't understand why he called [Cuomo], because he's not the governor anymore, he's gone,” McCoy said.

If Hochul believes this was an improper call for Jacobs to make, as the head of the Democratic Party, Hochul could appoint a new chair to replace Jacobs.

When asked if this was in the realm of possibilities, Hochul maneuvered her way around the question.

“People want to start chatter and conversations and all kinds of distractions early on before we get closer to an election,” Hochul said. “I will not be distracted.”