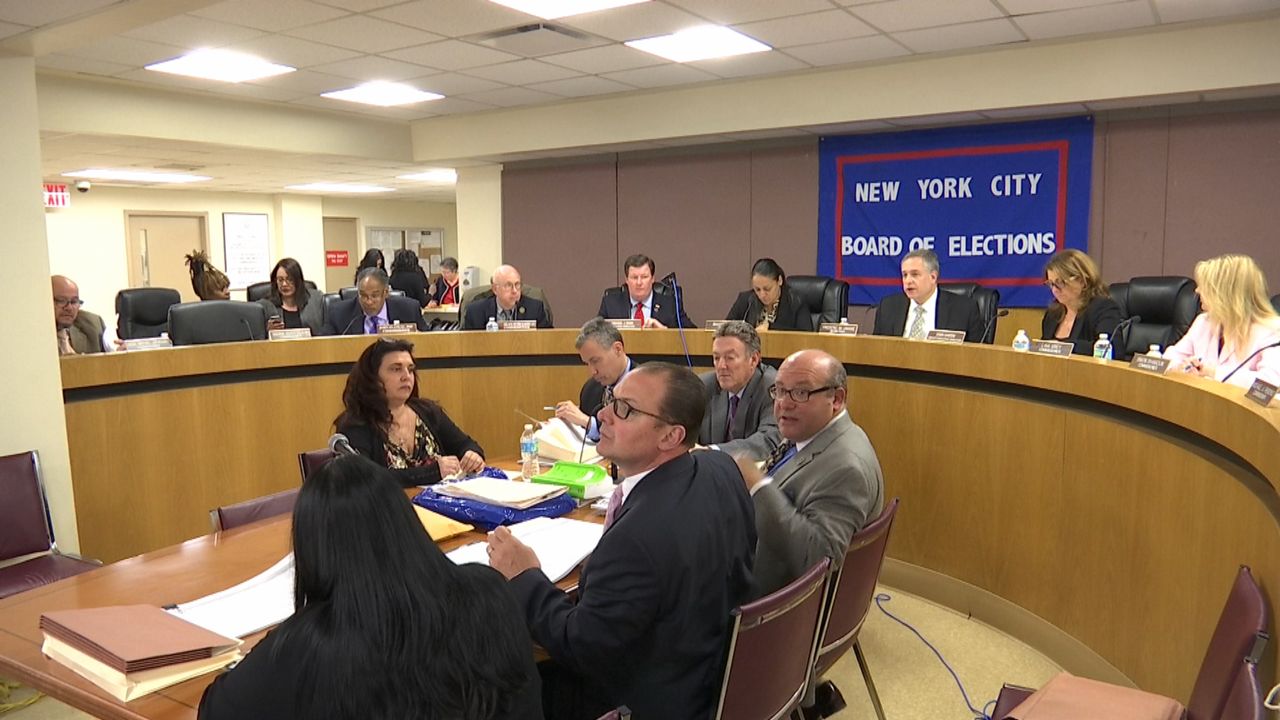 A November 2018 file photo of a New York City Board of Elections meeting.

Ballot Blunders: Looking at patronage and nepotism at NYC Board of Elections

NEW YORK — Last week, we were looking for one commissioner at the New York City Board of Elections (BOE).

NY1 wanted to discuss his deep ties to the Bronx Republican party. Marmorato is the Bronx GOP chairman's brother-in-law.

His familial connections have never been publicly disclosed before. A statement NY1 received from the party said the chairman, Michael Rendino, had nothing to do with his appointment. The statement said another member of the party’s leadership put Marmorato up for the post.

Still, it's a prime example of how things can work at the city Board of Elections, where local party leaders and organizations can install family members, friends, and patrons in plum positions, some with serious power.

Critics say it creates a system where the staff's loyalty lies with party organizations — a power-structure riddled with patronage and nepotism.

Some county political leaders have fired back, saying the criticism comes from people from the losing end of political battles.

"I think, especially in Queens, things are run very well,” Queens GOP Chairwoman Joann Ariola told NY1. “I know there are detractors out there saying there is all sort of corruption out there, or whatever they are crying. But you have to understand: these are people who have run against the county organization and lost. So there is a measure of sour grapes there."

The controversy runs so deep, other county leaders would not even speak to NY1 about how the Board of Elections functions.

We attended the county's pre-election breakfast last week. But again, the county leader would not take our questions.

The assemblywoman opted to walk in the middle of Flatbush Avenue, into oncoming traffic rather, than talk to us about the board.

Ultimately, current and former employees at the board say it's these county leaders who have real sway over how the board functions and how our elections are run.

For starters, each borough has a chair for the Republican and Democratic parties. Those leaders typically recommend who gets nominated to the 10-member Board of Elections. The City Council usually approves (some say rubber stamps) those appointments, essentially meaning each county leader and organization has a seat on the board.

That system trickles down to the staff as well.

Sources at the board tell NY1 the top positions are divided up among party leadership. So, behind the scenes, the top-level jobs with the highest pay are doled out to certain county leaders and organizations to appoint.

For instance, the head of voter registration is a Staten Island Republican who is also the mother of Vito Fossella, the former congressman and current GOP candidate for borough president.

It goes down to lower level staff, too.

State law requires hundreds of positions at the board be divided between the two parties. So let's say a Republican is inputting voter registration data. Then, a Democrat will review it. That’s hundreds of jobs.

And critics say that breeds a system of patronage where party loyalty can come first.

"It can be very frustrating for the executive director and the co-executive director who find that the staff who theoretically report to them often have greater loyalty to the party county leader who sponsored their appointment at the board,” said Douglas Kellner, the co-chair of the state Board of Elections told NY1. “That directly relates to the competence and the capacity of the agency to fulfill its mission."

A review of the staff list found more than a dozen family members of elected officials or former elected officials who work at the board. That included at one point the niece of state Attorney General Letitia James.

And it goes on.

NY1 has learned that the son of the Queens County Republican chairwoman works at the Queens office. His salary is a little over $48,000. Ariola is also running for City Council in Queens.

"He applied like anyone else. He was qualified and he got a job at the Board of Elections,” Ariola told us.

She added he was completely qualified for the job. We asked her if she submitted his resume.

“I did not submit his resume. I don't believe so. But, you know, his resume, he was qualified and he was hired and I have had nothing to do with his employment since then,” Ariola said.

Back in 2011 and 2012, the daughter of the deputy executive director of the board, a Bronx Republican, also worked at the BOE. She took home a little more than $18,000, according to the BOE.

The board's current executive director brushed off the criticism of patronage and nepotism.

In 2013, the city's Department of Investigation discovered about 1 in every 13 employees were related to someone at the Board of Elections. Since then, board officials say they no longer have immediate family members serving as subordinates.

Despite the multiple examples of patronage or nepotism that NY1 found, some current and former county leaders say there is nothing wrong with how the board operates.

"Everything is a system of patronage,” said Keith Wright, the chair of the Manhattan Democratic Party. “I mean, look at City Hall. Look at the state legislature. Look at the presidents and the Capitol. Everything is patronage. It doesn't mean that it's all bad. Patronage is not a bad thing at all. With patronage, you get to help people in your communities."

Meanwhile, former employees of the board claim this system has serious consequences.

Betty Ann Canizio, a former deputy clerk in Brooklyn, said she witnessed people come to work drunk and she saw fights. Canizio was suspended from the board in 2016 for her involvement in the purging of 117,000 voters from the voter roll. She denies having anything to do with it and later resigned from the board.

She says lack of training and accountability at the board is what leads to mistakes.

"When I took the job at the board, I asked if there was any training for me. I was laughed at by Human Resources. 'No, no training,’” Canizio recalled. "I think that sums it up: chaotic. How they pull off an election is how Biden just got out of Afghanistan: a wing and a prayer."

“While on a non-breaking assignment, Courtney Gross and crew became aggressive and cantankerous when chasing a story they were previously informed was absolutely erroneous, the Brooklyn Democratic Leader Rodneyse Bichotte Hermelyn and the Brooklyn Commissioner of Board of Elections, who is also Black, were related. The Assemblymember is one of the most progressive leaders in reforming election law to increase access, including language access for immigrants, with many of her proposed reforms passed into law. Creating disruption and havoc after being told the ‘tip’ was untrue is a waste of time for everyone including NY1! This is a proliferation of the ‘they all look alike to me’ mentality.”

“NY1 stands behind Courtney Gross and her exclusive reporting of the NYC BOE. Courtney is a respected journalist with a long history of covering issues important to New Yorkers. NY1 rejects any implication that Courtney's reporting was motivated by anything other than the facts.”