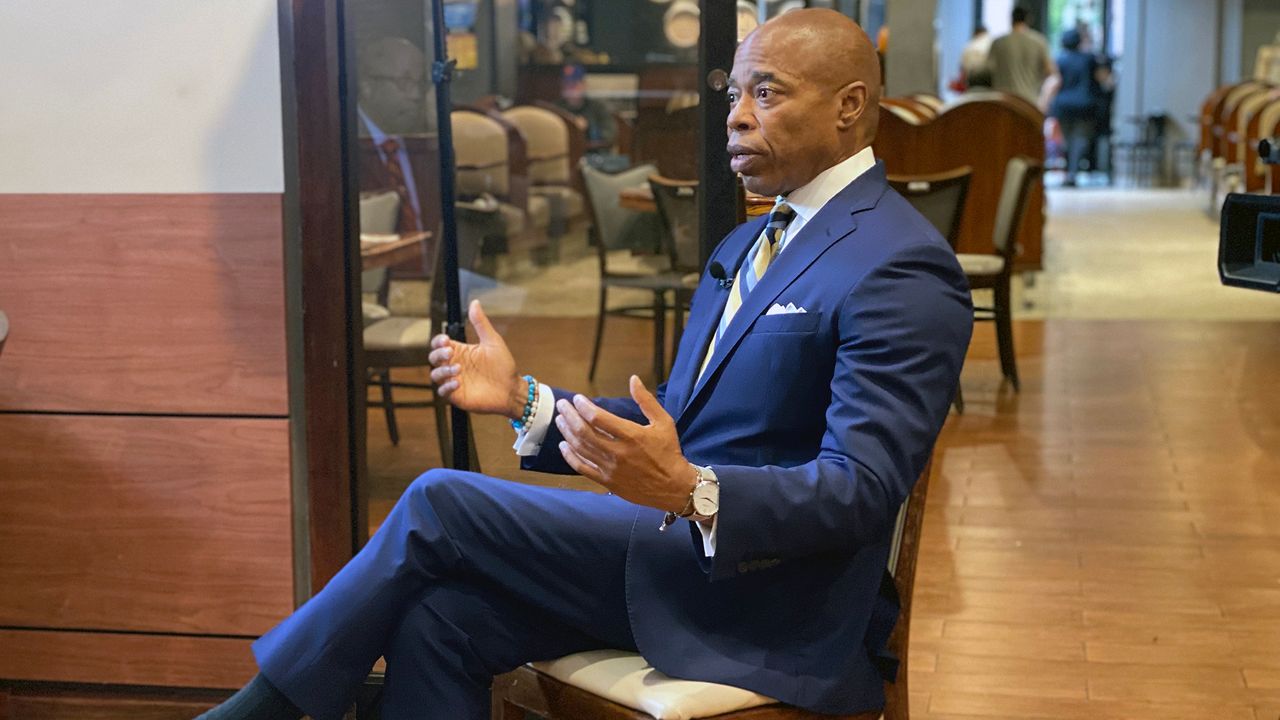 NEW YORK — If he’s elected the next mayor of New York City, Eric Adams said he’ll implement plans that may get him booed and heckled in the moment.

But, he said, “If I’m successful, I’m going to be retrospectively appreciated. People are going to look back at the systemic changes I’m going to make and say, ‘You know what, we might not have liked what he was doing then. But he had it right.’”

The Democratic nominee for mayor sat down with NY1 political anchor Errol Louis for an extensive one-on-one interview at the Park Plaza diner in downtown Brooklyn.

Adams said he would be omnipresent in the city’s communities, especially outside of Manhattan.

“You’re going to see me in the outer boroughs more than any mayor in the history of New York,” he said. “And we’re setting up shops. We’re going to set up shops in the community centers in NYCHA developments, because if we want to fix NYCHA, then my heads of NYCHA need to spend time in NYCHA. Let a few rats run across your feet, and then you’ll feel the urgency of dealing with the rodent problem.”

“So the crime is not what happens on Mother Gaston Boulevard, Errol. The crime is what happens in an educational institute that, basically, they have turned their backs on our children,” he said.

Adams affirmed that he does believe the Rikers Island jail complex should close and be replaced with borough-based jails.

“Yes, I do,” he said. “And I believe we need to change the ecosystem of our incarceration system.”

"Everyone is talking about what is happening to the inmates," Adams said. "But guess what? The correction officers didn’t do anything to end up in Rikers Island. They’re there to protect us. And so we have to have a balanced conversation of, how do we create an environment for those husbands, those wives, those sons, those daughters that are protecting us inside the correctional facility? We totally ignored that.”

In an interview with @errollouis, @ericadamsfornyc acknowledges the problems surrounding correction officers calling out sick or simply not showing up to work.

But he also says the conditions that officers face need to be taken into account. #NY1Politics https://t.co/mEjeT9rho6 pic.twitter.com/TUzJVZArPN

One Adams proposal is that parole officers also be life coaches.

Additionally, he agrees with Mayor Bill de Blasio’s mandate that Department of Education employees be vaccinated against COVID-19, saying his own borough hall staffers are inoculated.

“I believe the mayor did the right thing. I believe it was important. COVID is real. It’s a formidable opponent,” he said.

Adams added that unlike de Blasio, he would not get involved in the City Council speaker’s race: “My goal is not to put my finger on the scale.”

And as for his paperwork troubles, which include improperly filed tax returns and which have been under attack by Adams’ Republican opponent, Curtis Sliwa, the candidate told Louis he claims responsibility.