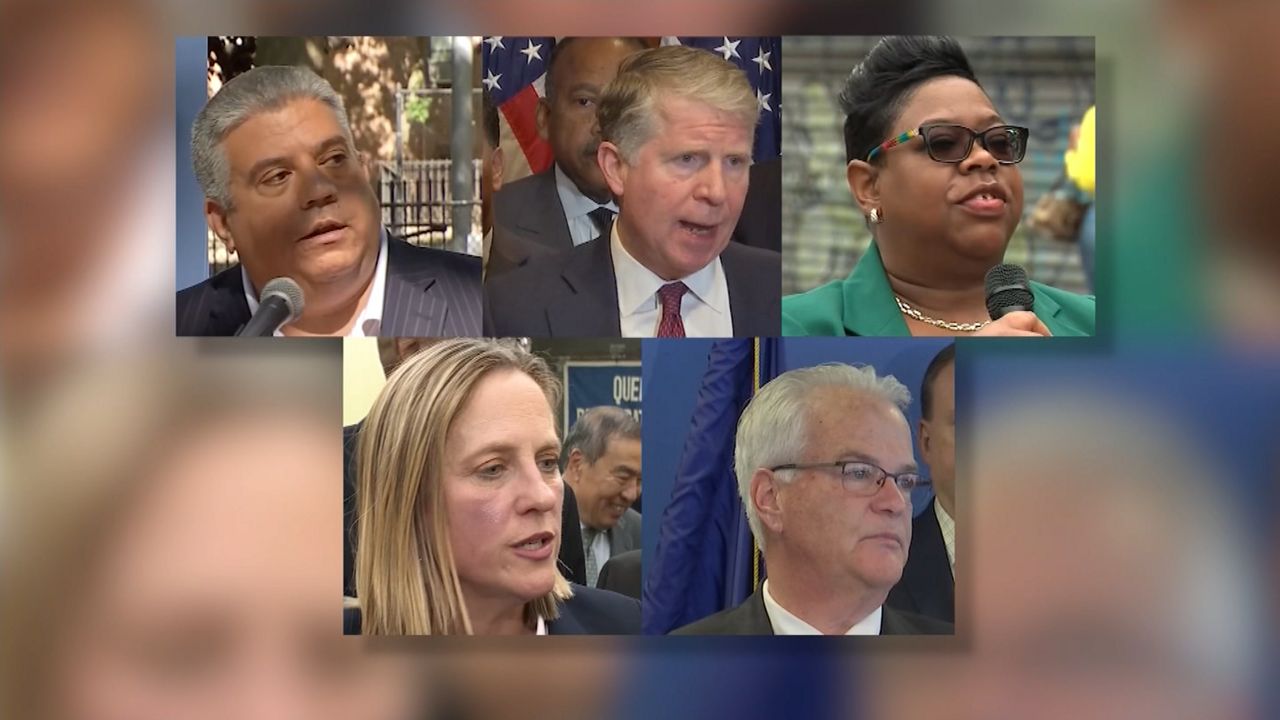 The city’s five district attorneys have the power to alleviate the crisis on Rikers Island, but some say they’re not using it.

NEW YORK — In the ongoing accountability battle over who has power to address the ongoing crisis on Rikers Island, the city’s five publicly-elected district attorneys have yet to take clear significant action.

District Attorneys Eric Gonzalez of Brooklyn, Melinda Katz of Queens and Darcel Clark of the Bronx, who have all recently toured Rikers Island, agree there is an emergency in the city’s jail complex.

Despite that, they've taken no clear action to relieve the conditions most lawmakers say amount to a humanitarian crisis.

"You can’t acknowledge that reality and then keep sending people into that hell," Germán said.

Alice Fontier, the managing director at Neighborhood Defender Services, said courts are failing to recognize the unfolding crisis at the jails.

"We are going to lose people, lives at an increasing rate if this not handled immediately and there is no recognition of that in the courts when bail is being set," Fontier said.

As the city and state struggle to respond, the numbers fluctuate. As of Thursday, there were 5,740 people in custody of the Department of Correction. Thousands of them are pre-trial detainees, not convicted of any crime.

Advocates say district attorneys should be considering options such as supervised release and other alternatives to incarceration given conditions on the island.

Jullian Harris-Calvin, the director of the Greater Justice New York program at the Vera Institute for Justice, highlighted that the majority of people on the island have not gotten their day in court.

"So they're presumed innocent under the law and there are many ways for the DAs to jump in," Harris-Calvin said. "It's really important that we don't play into this dichotomy between public safety and pre-trial detention."

Still, numbers show district attorneys, prosecutors and judges are sending people into the facilities and asking for high bail from those who cannot pay it.

"The truth of the matter is that both the courts and the DAs are acting like it's just business as usual," Germán said. "Asking for outrageous amounts of bail, not even talking or addressing the issue of Rikers."

NY1 reached out to all district attorneys. All of them said they were reviewing their options, but none has publicly committed to releasing detainees charged with non-violent felonies or misdemeanors, a figure which hovers in the thousands.

"That is what the bail reform law targeted, so this isn't taking some radical dramatic step — it's what the law requires," Harris-Calvin told NY1.

Brooklyn District Attorney Eric Gonzalez said last week he had directed his office to be more selective on bail requests.

In the meantime, claims from officials regarding the need to consider public safety is very much up for debate. The jail population on the island has increased and the number of people charged with violent felonies is growing. Still, advocates say prosecutors have options.

"This idea that because some people in there are charged with violent felonies, or are quote-unquote ‘violent individuals’ — that it makes everything okay? It's completely unacceptable," Germán said.

Experts agree there is no evidence to show people released from jail are likely to become repeat offenders. According to data from the Center for Court Innovation, 92% of pre-trail detainees who are released attend all court dates. The research also shows jailing people pre-trial actually increases their likelihood of future arrest.

Following NY1's inquiry, a spokesperson for Manhattan DA Cy Vance said his office has so far consented to the pre-trial release of 24 felony defendants, resolved six felony cases allowing for release and have dismissed two misdemeanor cases. His office is looking to place 17 additional felony defendants into community programs.

While the district attorneys look through their dockets, the clock is ticking for thousands on the island.