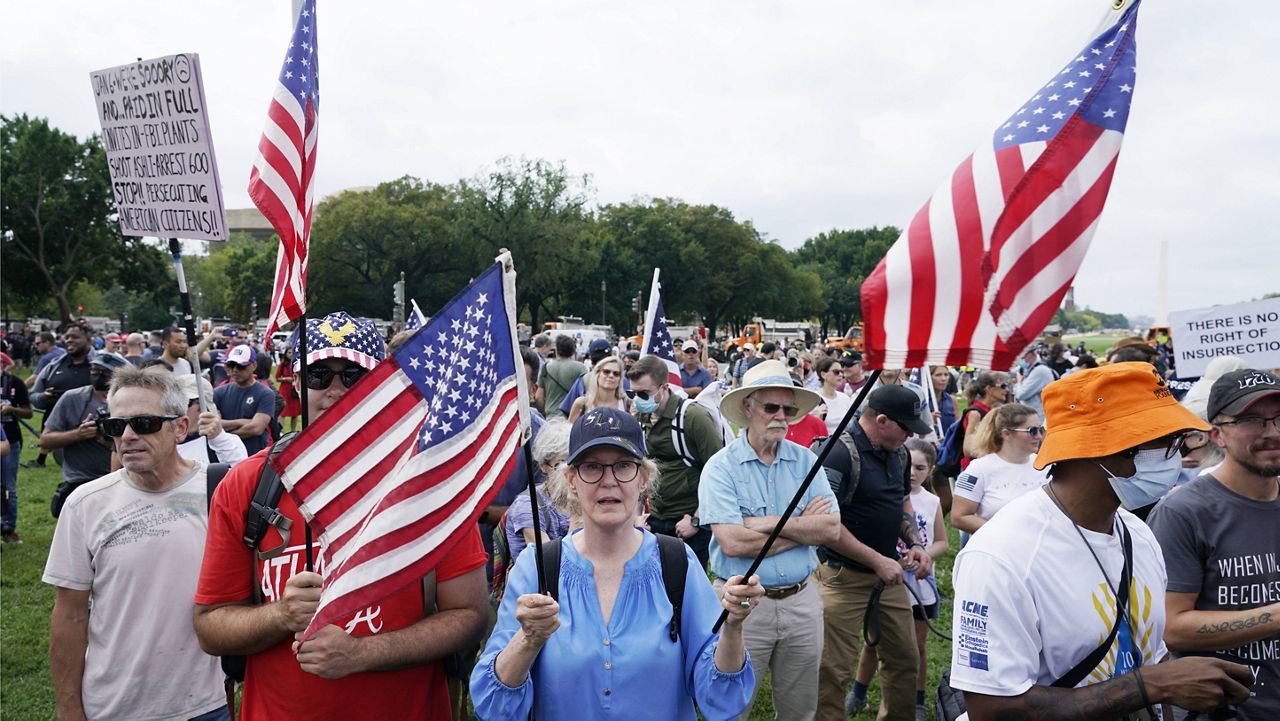 People attend a rally near the U.S. Capitol on Saturday. (AP Photo/Gemunu Amarasinghe)

Fears that a rally near the U.S. Capitol on Saturday would erupt into a repeat of the Jan. 6 riot appeared unlikely to materialize, as a sparse crowd of protesters voiced support for many of those charged in the insurrection.


The demonstration, called “Justice for J6,” was held at Union Square, at the foot of Capitol Hill. The goal, organizers said, was to shine a light on the Jan. 6 protesters being, in their eyes, treated unfairly harsh because of their political views.

But media members and police outnumbered the protesters. The Associated Press estimated there were a few hundred rallygoers in attendance — less than the 700 that had been expected and a far cry from the thousands who attended the Jan. 6 rally just before a mob of Donald Trump supporters stormed the Capitol, disrupting Congress as it met to certify Joe Biden’s win in the presidential election.

Determined to avoid a replay of that day, law enforcement officers were on high alert. U.S. Capitol Police and the Department of Homeland Security each issued warnings during the week about online threats of violence, and the Defense Department approved a request to have about 100 members of the D.C. National Guard at the ready.

The same security fencing and barriers that protected the Capitol in the weeks after the riot were reinstalled. Members of Congress were urged to stay away, and multiple congressional offices were closed.

Persistent attempts to rewrite the narrative of the violence and panic of Jan. 6, and the increasing volatility behind the lie that the 2020 election was stolen, have made it impossible to predict what might happen. After all, law enforcement was only expecting a free speech protest the day of the Capitol riot.

Counterprotesters stood by and jeered. Some held anti-Trump signs and one man who had confronted some of the pro-Trump protesters was quickly removed by police, who used bicycles to shield him from the crowd as they escorted him down the street.

One person was arrested in the crowd for carrying a knife and a second man was arrested after someone reported to officers that they saw him carrying what appeared to be a handgun, police said. Two other people who police say were wanted in Texas – for a firearms charge and probation violation – were also arrested after being pulled over near the Capitol on Saturday morning.

During the rally, organizers blamed some lawmakers and the media, which reported on law enforcement’s concerns about potential violence and its preparations, for keeping protesters away.

“Shame on the people in the system that put fear in the hearts of American citizens to stay home and to not come out,” said Cara Castronuova, founder of the group Citizens Against Political Persecution and the rally’s co-host.

Many commenters on online platforms like Telegram that are popular with the far right disavowed the rally, saying they believed law enforcement was promoting the event to entrap Trump supporters. Some urged their followers not to attend an event they said was secretly organized by the FBI.

Those speaking at Saturday’s rally in Washington said they condemned the violence committed eight months ago and were only speaking out for the people charged — including those still detained — with nonviolent offenses, such as trespassing. But some speakers told stories about family members who are facing serious charges.

One woman said her boyfriend, Jonathan Mellis, is being held in solitary confinement “for no reason.” The charges against Mellis include engaging in physical violence in a restricted building with a deadly weapon. Mellis was seen on camera on Jan. 6 using a stick to attack officers who were outside the Capitol trying to hold back the mob, authorities said.

Jeff Zink, a congressional candidate in Arizona, said all his son, Ryan Scott Zink, did was record video of another protester breaking a window. But the indictment against his son says Ryan Scott Zink posted several videos on social media throughout Jan. 6 documenting his participation, including saying into the camera, “We knocked down the gates! We’re storming the Capitol! You can’t stop us!” and “We’re about to bum-rush this (expletive)!”

Some of the speakers told stories about the poor conditions and treatment defendants have faced in jail. Mellis’ girlfriend claimed that the alleged rioter was fed four slices of bread, a cookie and a packet of tartar sauce for dinner Friday night. Zink said his son, who was jailed for six weeks, reported seeing black mold in his cell, not being allowed to see his lawyer or relatives at times and being forced to go several days without showering.

Republican members of Congress kept their distance from the demonstration, a fact that Matt Braynard, a former Trump campaign staffer who organized the event, voiced frustration about.

“Maybe you read the same Constitution I did,” he added. “My understanding is that the elected officials we’ve sent from our states and congressional districts, that they're supposed to work for us and represent us. I think that some of them have forgotten that. “

Two other Republican House candidates — Joe Kent of Washington state and Mike Collins of Georgia — did, however, address the crowd.

Collins argued that justice system is punishing Jan. 6 suspects more than it did protesters involved in last year’s demonstrations that followed the police killing of George Floyd, an unarmed Black man in Minnesota.

“The facts are clear: We've got nonviolent, misdemeanor offenders that are currently be held with no bond, no access to lawyers and sometimes in solitary confinement,” Collins said.

“The American people are not stupid,” he continued. “We can see with our own eyes the difference in the treatment from our federal government because of someone's political beliefs.”

More than 600 people have been charged for their alleged roles in the Jan. 6 insurrection, and the FBI is searching for others.

The Associated Press reviewed hundreds of court and jail records for the Capitol riot defendants to uncover how many were being detained and found about 63 held in federal custody awaiting trial or sentencing hearings.

Federal authorities have identified several of those detained as extremist group leaders, members or associates, including nine defendants linked to the Proud Boys and three connected to the antigovernment Oath Keepers. Dozens are charged with conspiring to mount coordinated attacks on the Capitol to block Congress from certifying the 2020 Electoral College vote, among the most serious of the charges.

Some jailed defendants are charged with assaulting police officers, others will making violent threats. A few were freed after their arrests but subsequently detained again, accused of violating release conditions.

The U.S. Court of Appeals for the District of Columbia Circuit has set standards for judges to apply in deciding whether to jail a Capitol riot defendant. A three-judge panel of the appeals court ruled in March that rioters accused of assaulting officers, breaking through windows, doors and barricades, or playing leadership roles in the attack were in “a different category of dangerousness” than those who merely cheered on the violence or entered the building after it was breached.

More than 140 police officers were injured Jan. 6, and four people who were at the riot died, including Trump supporter Ashli Babbitt, who was shot by a police officer as she tried to climb through a window into the Capitol. A fifth person, Capitol Police Officer Brian Sicknick, died the following day after suffering two strokes.