NEW YORK — The agency in charge of administering health services at Rikers Island is blowing the whistle about the ongoing humanitarian crisis at the jail, which threatens the life and safety of both inmates and staff.

In a letter exclusively obtained by NY1, Ross MacDonald, chief medical officer for the City’s Correctional Health Services, is asking the City Council to request state or federal assistance. In the last year, 10 people have died, including five who committed suicide.

“I ask that you urge the city to ask for outside help to immediately stabilize a situation that has resulted in death and threatens the health and well-being of everyone who works and resides in city jails,” MacDonald wrote.

MacDonald sent the letter Friday to Manhattan Councilman Keith Powers, chair of the Committee on Criminal Justice, outlining in specific detail how the ongoing staffing issues at the jail are preventing inmates from receiving basic services and putting staff in danger.

Correctional Health Services staff are seldom heard from publicly.MacDonald’s letter signals a breakdown between health care workers and the Department of Correction, the two agencies tasked with providing services to inmates as long as they are in custody.

For months, the Department of Correction has been struggling with a staffing crisis as thousands of officers have been calling out sick and failing to report for duty. At the same time, the inmate population at Rikers has increased, leading to a “new and worsening emergency that has developed over the course of the last year,” according to MacDonald.

Mayor Bill de Blasio and Department of Commissioner Vincent Schiraldi have rolled out plans to solve the crisis, including the hiring of an additional 600 officers, and Schiraldi has said he is trying to get officers back to work. Despite that, many of the administration’s solutions are on a timeline still months away and advocates say immediate action is needed to improve conditions.

The correction officers union maintains that guards are overworked, many of them pulling double or even triple shifts, while others are forced to take time off to recover from serious injuries. They say the blame lies with the mayor and leadership at the Department of Correction.

Sources tell NY1 inmate intake areas at Rikers have become one of the most dangerous for inmates and staff. Several times over the last months — and as recently as this week — dozens of inmates were being kept in pens without being admitted for days. COVID-19 protocols are frequently violated, and overcrowding is leading to fights over basic necessities like food.

“The overcrowding leads to people kept for prolonged periods in temporary spaces such as showers, at times standing in feces,” MacDonald wrote.

According to MacDonald, due to the breakdown in basic jail operations, medical staff are also struggling to control COVID-19 transmission, and for the first time this year infections in the jails are outpacing spread in the city.

Advocates have called on de Blasio to release a portion of the approximately 6,000 inmates on the island, including many who are pre-trail detainees. So far, the administration has not said it is considering that as an option.

Powers has called a special City Council hearing on the ongoing crisis next week. He praised MacDonald for publicly raising the alarm about the state of the city’s jails.

“This is an all-hands on deck moment,” the councilman said. “We are facing a crisis of safety, staffing and security and have to consider all options to address the situation immediately.”

NY1 has reached out to City Hall for comment on the letter.

Read the letter below 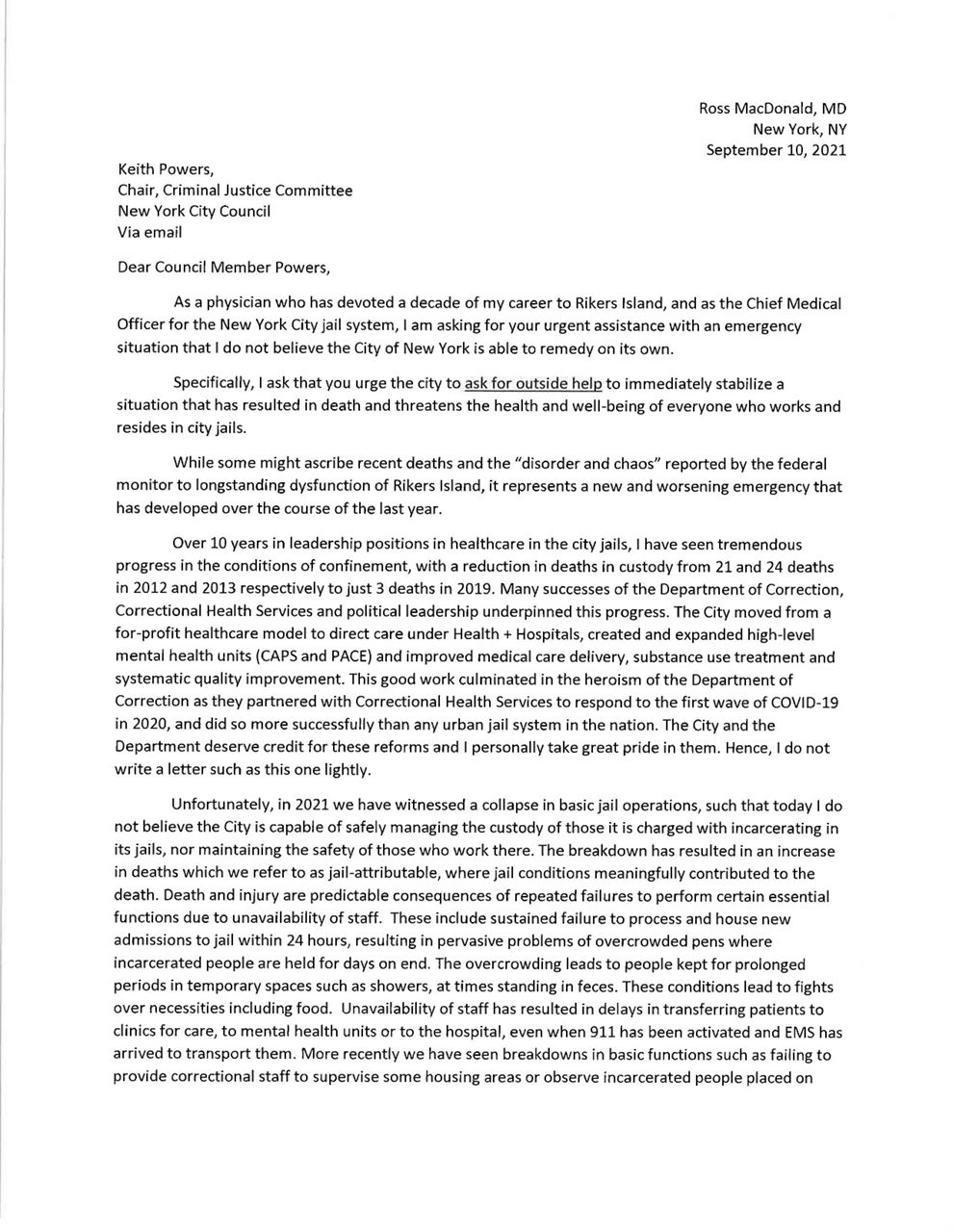 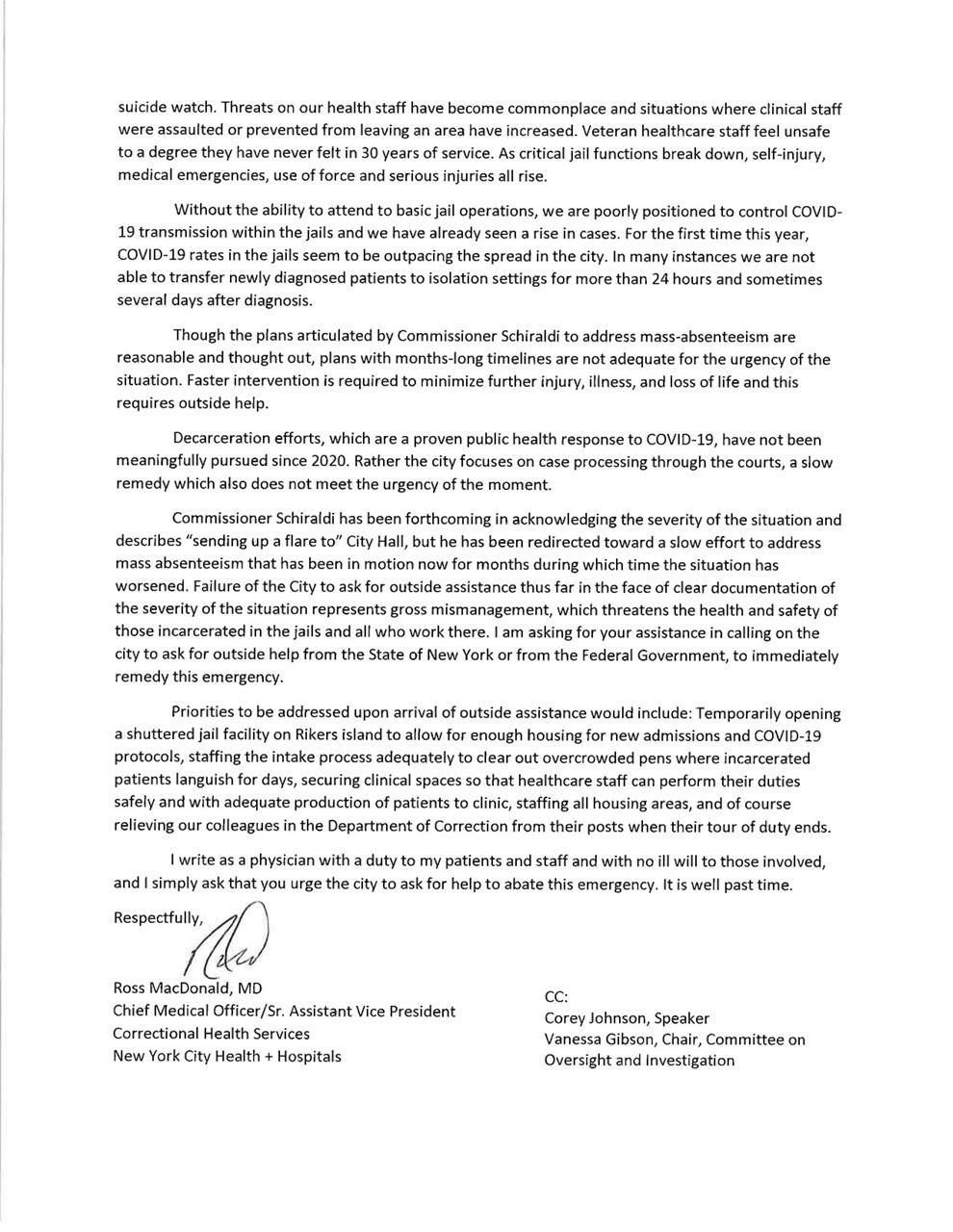